Turkey's parliament is set to vote on an omnibus bill that includes measures to extend state-of-emergency powers three more years. 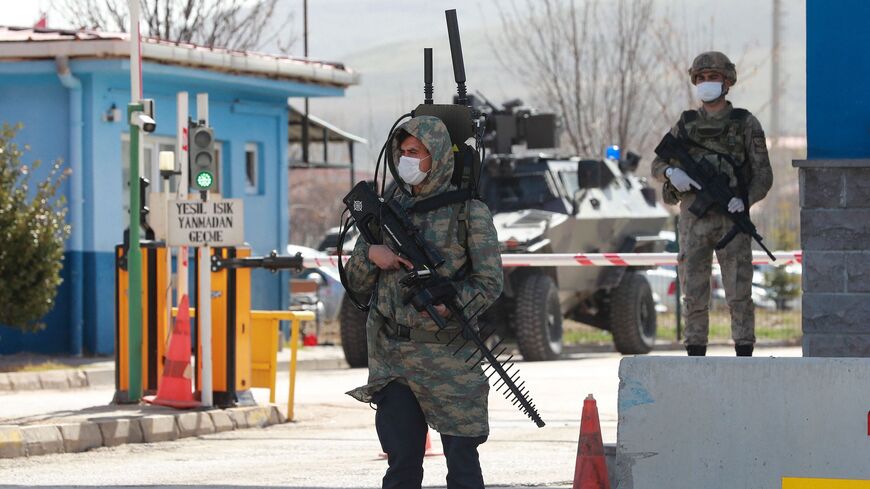 Security forces stand guard outside the courthouse of Sincan, outside Ankara, on April 7, 2021, before the verdict in the trial of 497 defendants over the 2016 failed coup attempt. - ADEM ALTAN/AFP via Getty Images

ISTANBUL — Five years after a violent coup attempt in Turkey, lawmakers are set to vote on extending some state-of-emergency powers originally introduced in the fallout from the failed 2016 putsch.

On Tuesday, Turkey’s Planning and Budgetary Parliamentary Commission approved a draft bill that includes articles extending emergency measures for three additional years, including powers to dismiss public servants on suspicions of links to terror organizations and hold terror-linked suspects in police custody for up to 12 days without charges.

The Turkish Parliament is now expected to debate and vote on the omnibus legislation, which analysts say is likely to pass into law through a majority vote held by lawmakers with the ruling Justice and Development Party (AKP) and its coalition partner, the Nationalist Movement Party.

If passed, critics say the bill would prolong measures in Turkey introduced during a 2016 state of emergency and effectively continued following the technical end of emergency rule in July 2018.

“The draft bill does not provide any justification for this prolongation,” Ali Yildiz, a human rights lawyer based in Brussels, told Al-Monitor. “It is exactly the same provisions which were already extended in 2018." If passed, he said, they "will be in force until July 2024.”

He added, “I don't think the AKP government will ever abandon these powers.”

The events of July 15, 2016, and the following backlash continue to shape Turkish politics on the eve of its fifth anniversary. More than 250 people died during the coup and thousands have since been detained and faced trial on charges of supporting the coup, which the Turkish government claims was orchestrated by Fethullah Gulen, a Turkish cleric living in exile in the United States.

Despite a government clampdown on opposition groups that saw many civil society figures and journalists detained as well as more than 150,000 public servants dismissed, Turkish President Recep Tayyip Erdogan said Wednesday the threat posed by Gulen’s supporters remains prevalent both inside and outside the country.

“As we continue our fight against other terrorist organizations without compromise and with determination, we will follow FETO until its last member is made ineffective,” Erdogan said Wednesday, using the Turkish government's acronym for Gulen’s organization.

He highlighted continued state efforts to reel in opponents, referencing the recent rendition from Kyrgyzstan to Turkey of Orhan Inandi, who Erdogan claimed worked as a top financial coordinator for Gulen networks in Central Asia.

“The security of our country starts wherever threats exist, rather than just our borders,” Erdogan said Wednesday, noting his government was training staff at Turkish diplomatic missions, possibly with aims to track Turkish fugitives abroad.

Turkey’s Interior Ministry maintains a “Most Wanted Terrorists” list on its website that includes more than 300 alleged Gulen supporters for whose capture the Turkish government offers bounties totaling $77 million.

While Turkish renditions continue abroad under some international scrutiny, opposition lawmakers and civil society organizations have condemned efforts to extend state of emergency measures within the country. According to data shared by the State of Emergency Inquiry Commission, 16,385 civil servants were dismissed over the last three years under the anti-terror measures currently being considered for extension in parliament.

Reacting to the parliamentary commission’s approval of draft legislation Tuesday, Garo Paylan, a lawmaker with the pro-Kurdish People's Democratic Party, said the government had brought the nation into a democratic and economic crisis by upholding such policies.

In response to criticism from opposition lawmakers, the deputy chair of the AKP's parliamentary faction, Bulent Turan, denied the government was continuing emergency rule, stating the measures were being sought to fight terrorist organizations in the country.

In a statement Tuesday, Turkey’s Human Rights Foundation denounced the measures in the draft bill, saying they would lead to the “significant destruction” of democratic rights and noting their passage would ensure Turkey’s 2023 general elections would be held under “a de facto state of emergency regime.”

The International Commission of Jurists also issued a statement Wednesday calling on lawmakers to reject the draft bill and “end the corrosive impact of these powers on human rights and rule of law.”

“The extension of these emergency powers would effectively make permanent the state of emergency,” wrote Massimo Frigo, senior legal adviser for the group's Europe and Central Asia program, in the statement. “This is a blow to the rule of law that in Turkey has been effectively trapped in limbo for the last five years. These powers should be repealed.”