The overnight decrees increasingly governing Turkey have become a source of livid satire and agony for millions of Turks. 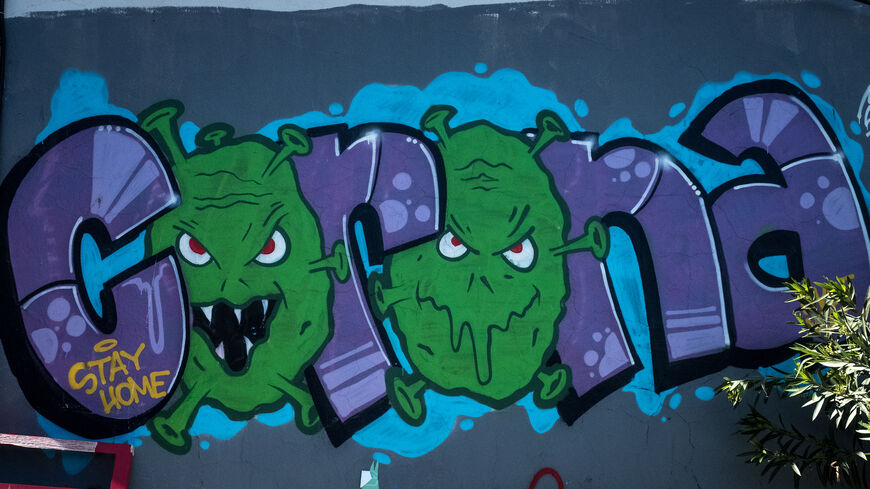 A coronavirus graffiti mural urging people to stay home is pictured during a three-week nationwide lockdown on May 6, 2021, in Istanbul, Turkey. - Chris McGrath/Getty Images

The Turkish government started a two-week nationwide lockdown to control the pandemic April 29.

The total shutdown, running from mid-Ramadan to the end of the Eid holiday, calls for all nonessential workers to stay at home and all nonessential transactions to be curtailed. Residents can leave their houses for the closest store. Even emergency travel technically requires a permit. Yet, as the shutdown started, images of travel permits issued to AKP members leaked to the press, raising questions about who is allowed to travel and how those travel documents can be acquired.

The purpose of the lockdown is to save lives but the way that it's being managed starkly highlighted the double standard for the AKP elite and the rest of the country. Ordinary Turkish residents are bombarded each night with new and updated decrees that directly impact their lives. Turkey has been ruled by decree for some time, but lately everyone has had to experience the confusion and arbitrariness firsthand.

In the first days of the lockdown, no one knew what to expect. The minister of interior’s statement that alcohol sales would be banned led to a rise in alcohol sales, probably for the first time ever during Ramadan. The confusion was exquisitely captured in the words of a police officer as he issued fines at a grocery store: “There is no written ban, but it was said on the news.”

A few days later the government officially banned the sale of all nonessential items. That decree caused even deeper confusion with no one sure which goods on market shelves were nonessential, did the ban include online sales of those products? Some stores even banned sale of sanitary pads and condoms along with light bulbs, hair combs and matches.

The unreasonable bans did not stop there. Initially, the Turkish government decided all open-air farmer’s markets would be banned as well for reasons left unexplained. Farmers protested by dumping their products on the streets, and the government promptly issued a new decree allowing the markets to open. Apparently, no one in the government had thought about what would happen to fresh produce during the shutdown.

While police were issuing fines to lone swimmers in remote corners of Turkey, foreigners could freely enjoy the beaches. Tourists could travel to Turkey without any testing or isolation requirements. Mock tourism ads started spreading on social media with slogans like “Enjoy Turkey Without Turks.”

Adding insult to injury, Turkish Foreign Minister Mevlut Cavusoglu said at a press conference in Berlin, “We will vaccinate everyone that tourists can see.” His statement touched a nerve for the Turkish public and opposition leaders. Many social media users ridiculed Cavusoglu’s words, saying that Turkey’s native residents were like pets, only to be visible in public if vaccinated or that they should wear tags so that tourists can feel safe. Opposition parties posted videos ridiculing the double standards.

These last 10 days locked in their homes, most Turks watched as AKP elites were exempted from all the inconvenient bans. For example, President Recep Tayyip Erdogan announced that a maximum 30 attendees would be allowed at funerals. Only a few days later, he was caught on camera attending an AKP member’s funeral with a large crowd. AKP elites repeatedly violated the rules without any penalties.

Why does the AKP insist on passing unreasonable, even counterproductive legislation in such a difficult time?

First, there is the gridlock created by the new presidential system. Seren Selvi Korkmaz, co-founder of the IstanPol Institute, told Al-Monitor, “The new system ignores checks and balances completely. All decision-making processes are linked to one person. When you look at the bureaucracy, every single one of the personnel is also linked to that top one person. Common sense disappears. It depends on loyalty, not on merit.” Korkmaz explained that ignoring expert advice in favor of short-term financial gain has become a pattern. That the state apparatus is incapable of handling the basic logistics of the lockdown or explaining the reasons for some of the mind-boggling bans 15 months into the pandemic reveals dysfunctional institutions, ineffective interagency communications and devalued standard operating procedures.

Also, the arbitrariness of the system does not cost those in power, so there is little incentive to minimize error. Overnight decrees have been changed often and repeatedly since the transition into the presidential system in 2018, but this time they affect the daily lives of an overwhelming number of Turkish citizens. Political scientist Burak Ozpek told Al-Monitor, “Fast decision-making and a relentless 'fighting psychology' [that offense makes the best defense] are the main reasons."

Rather than institutions with set standards, he suggested, many policies are set by government loyalists, giving ample opportunity for errors.

Ozpek went on, "The cabinet sees the negative results of the decrees after they are published. When there is an outcry, decisions are altered promptly.” Oddly enough, he added, “Authoritarianism is not stable in Turkey.” The trial-and-error method is expensive, with tons of produce wasted in the farmer’s market debacle, but the government is not held accountable for its harmful decisions or its inability to produce solutions to everyday problems.

Finally, there is the growing competition among AKP elites that is affecting the government’s ability to manage the country. Erdogan’s repeated promise to run the country as a lucrative business establishment has proven destructive for its ordinary residents. Ayse Cavdar, an anthropologist from Berlin, told Al-Monitor, “All of these repeatedly changing decrees, bans and legislature indicate not only the government’s inability to deal with the challenges of the pandemic, but also its growing challenges in managing its own affairs. The ministers are businessmen, hence representing the interests of those in their own sectors. Now we witness the competition among and within these business establishments reflected on the bureaucratic establishment.”

The result of these unreasonable bans, frequently altered decrees and counterproductive legislation is the erosion of public trust in the state and in the president in particular. Korkmaz said, “Erdogan always had a goal. Despite his tactical fine-tuning he was rather consistent in the last two decades. But these repeated changes in the laws cause uncertainty for the public.” In the meantime, anger and resentment are brewing among Turkish residents who are asked to obey rules that are unclear and unjustified.