As Turkey prepares for a 17-day lockdown to stem a surge in COVID-19 cases, health experts and workers’ unions urge more financial support for citizens most impacted by pandemic restrictions. 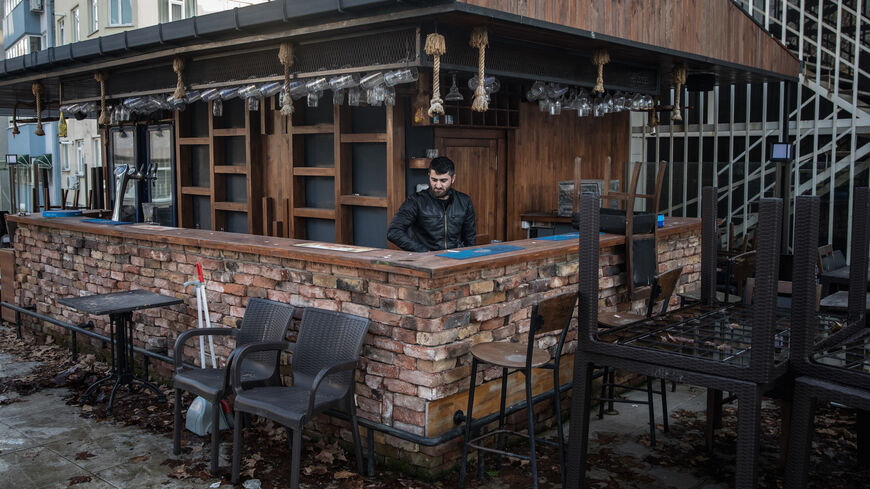 An employee of Dilo bar on Feb. 22, 2021, starts cleaning the rooftop terrace bar, which had been closed for 340 days due to coronavirus restrictions at that point, in the Kadikoy district in Istanbul. Due to a COVID-19 surge, alcohol sales in Turkey are being suspended from April 29 to May 17. - Chris McGrath/Getty Images

ISTANBUL – Turkish President Recep Tayyip Erdogan announced Monday that a nationwide lockdown would begin April 29 due to the coronavirus. He urged most nonessential workers to stay home in effort to slow a recent surge in new COVID-19 cases.

The new curfews deepen previous restrictions introduced two weeks earlier and will be effective until May 17. During the curfews, intercity travel will be barred without prior approval, schools will be shuttered, most shops will be closed — apart from grocery stores operating on limited hours — and alcohol sales will be banned.

The decision comes after Turkey’s Health Ministry recorded over 37,000 new coronavirus infections April 26. This was a drop of 1,000 from the day before but still a high number amid an ongoing surge. The nation ranks fourth globally in new daily cases on a per-capita basis. In addition, recorded coronavirus-linked deaths have averaged about 350 per day over the last week in Turkey.

"At a time when Europe is entering a phase of reopening, we need to rapidly cut our [new daily] case numbers to below 5,000 to not be left behind,” Erdogan said. “Otherwise, we will inevitably face heavy costs in every area, from tourism to trade and education.”

For months, health experts and workers’ unions have called for more stringent social distancing measures to curb the pandemic, but some say the coming curfews should be coupled with social support to help workers and families recover lost earnings amid growing financial strains from the health crisis. Turkish opposition members also criticized the lack of social support ahead of the lockdown.

“If there is a closure, very large segments of workers lose their income and wages,” Kivanc Eliacik, director of external relations for the Confederation of Progressive Trade Unions of Turkey, told Al-Monitor.

In an April 27 statement, confederation leader Arzu Cerkezoglu called for income support and paid leave benefits for employees unable to work during the lockdown, while criticizing disparities in the coming curfew measures, which exempt employees in manufacturing, agriculture, supply chain and other companies.

Under the planned lockdown, Eliacik said at least 60% to 70% percent of Turkish workers will be exempt from the curfews, including about 4 million employees in the construction and manufacturing sectors. Such employees will continue to face health risks in the workplace, the confederation said in the statement, which called for a stricter curfew that included more nonessential workers.

The Turkish Medical Association echoed the concerns in a video conference April 26 in which association leader Dr. Sebnem Korur Fincanci said 10% of the government’s reported 638 billion liras ($77.6 billion) in COVID-19 relief support has so far been allocated to workers and families facing financial difficulties during the pandemic, with the rest going to debt restructuring, business loans and the private sector.

Dr. Vedat Bulut, secretary-general of the association's executive committee, told Al-Monitor that “10% of the support went to poor people, while 90% went to business owners.” Bulut also said the coming curfew measures were “not the correct approach because there is no social support package offered to families.”

Bulut welcomed travel restrictions on most citizens, saying recent COVID-19 surges in the nation’s northwestern regions were mostly due to people leaving urban centers for coastal areas amid more pleasant spring weather. However, he condemned restrictions on outdoor and recreation areas, such as parks and seaside promenades, where infection risks are lower.

“When we close large families inside their homes, they are more exposed to virus risks than in an open environment,” Bulut said.

Meanwhile, a 17-day ban on alcohol sales during the lockdown period gave rise to indignance on Twitter, where the hashtag #alkolumedokunma or “Don’t touch my alcohol” was top trending April 27. Some social media users decried the measure as unwarranted, saying the ban infringed on their personal freedoms and was imposing conservative values on the population by force.

Al-Monitor visited five shops selling alcohol in Istanbul’s central Beyoglu district on April 27 and spoke with cashiers and shop owners who, speaking on condition of anonymity, made critical remarks about the decision as well as the government.

“How is alcohol linked to COVID?” one shop owner asked. “I don’t understand why they impose such a ban along with social distancing measures.”

“This is not a solution,” he continued. “This only brings us more problems. Whether there is a curfew or not, we still have rents and bills to pay.”

At another store, a cashier told Al-Monitor that alcohol sales more than doubled April 27 as a result of the coming ban.

“People are stocking up,” the cashier said, adding, “There is nothing we can do about the decision. We will close down and hope our finances are OK when we reopen.”

The curfews come as Turkey continues a vaccination campaign that has seen more than 21.5 million shots distributed, with about 8.2 million people receiving the two shots necessary for full coverage. On April 26, the Russian Direct Investment Fund announced it would begin production of the Sputnik V vaccine in Turkey in the coming weeks.