Health workers’ advocates say precautions in Turkey may not be sufficient to contain the coronavirus and safeguard workers as the country grapples with the fast-spreading pandemic. 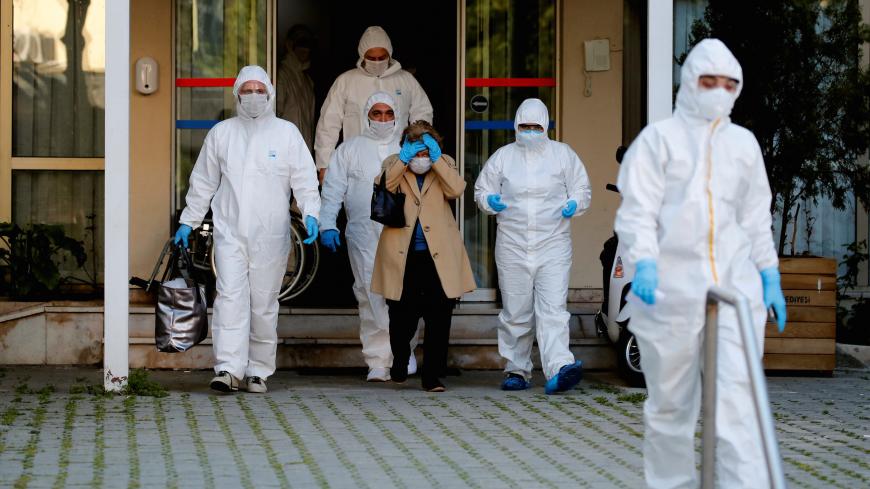 Paramedics escort a woman as she walks toward an ambulance during a two-day curfew which was imposed to prevent the spread of the coronavirus disease (COVID-19), in Istanbul, Turkey, April 12, 2020. - REUTERS/Umit Bektas

ISTANBUL — Turkish President Recep Tayyip Erdogan announced April 13 that another round of weekend curfews will be imposed on Turkey’s largest cities to help stem the spread of the coronavirus. Yet medical groups are questioning the efficiency of state efforts to contain the fast-growing COVID-19 pandemic and safeguard workers throughout the country.

To date, the Turkish government has ordered the temporary closure of restaurants, cafes and bars, restricted foreign and domestic travel while imposing relatively strict curfews on senior citizens and on people under 20 years of age who are not working.

While the measures are helpful in limiting new infections, many Turkish workers continue traveling to and from job sites on weekdays, posing risks to the employees, said Fadime Kavak, Sisli branch co-chair of the Trade Union of Employees in Public Health and Social Services.

Kavak, referring to compensation payments that would be avoided by keeping the workdays curfew-free, told Al-Monitor, “The reason for the weekend curfews is very obvious, they won’t have to put workers on paid leave.”

She added, “Most [workers] live in slums where buses are more packed than in the city center. … It appears the workers’ lives are not worth much for the state.”

As of April 14, Turkish health officials had reported 65,111 confirmed cases and 1,403 coronavirus-linked deaths as the country remains in the top 10 nations most impacted by the pandemic.

The first weekend curfew was announced only hours before its imposition April 10, causing citizens to rush out in a bout of panic buying. Istanbul Mayor Ekrem Imamoglu, among others, criticized the way the curfew was carried out, saying it was a poorly executed government intervention.

On April 12, Turkish Interior Minister Suleyman Soylu offered to step down over the weekend curfew imbroglio, but Erdogan rejected the resignation. To avoid a repeat of what happened April 10, Erdogan announced the second weekend curfew well in advance, allowing citizens time to plan accordingly, while leaving the door open for more temporary curfews in the coming weeks.

“These curfews could be beneficial to prevent new infections,” Dr. Bulent Nazim Yilmaz, secretary-general of the Turkish Medical Association, told Al-Monitor. “If we don’t pursue our habits of having picnics and outings on the weekends, we could reduce [social] contact. However, this is not a pandemic management method.”

In a press release Aprl 13, the medical association recommended that the Health Ministry focus its resources on high-risk areas and neighborhoods where panic shopping was most severe the evening of April 10. The association advised state officials to shut down mines, factories, small and medium-sized enterprises and to provide paid leave for workers.

The association also suggested health authorities use local medical centers for COVID-19 tests and the distribution of information.

“If they informed the public and the protocols were transparent, then people would … make more informed choices and decide to stay at home. They wouldn’t have to be forced to stay at home,” Kavak told Al-Monitor.

In recent days, additional measures have been rolled out, including the distribution of face masks to Turkish citizens. Turkish Airlines also extended the suspension of international flights until May, while domestic flights have been grounded until April 20.

This week, a mobile tracking application designed by the Turkish Health Ministry and cellphone operators appeared on the Google Play Store, but is not yet available for download. Created to help reduce the spread of COVID-19, the app is named “Hayat Eve Sığar”(“Life fits inside the home” in English) and sends automated messages or calls to patients diagnosed with the coronavirus when they leave predetermined quarantine areas, oftentimes their homes.

While similar apps are being designed and implemented around the world, the technology has raised concerns among privacy advocates who say citizens’ data could be vulnerable to exploitation or abuse. According to information in the Play Store, the app will also allow all mobile users to view urban maps showing areas of high coronavirus prevalence so they can adjust their travel plans accordingly and reduce their risk of exposure.

In addition, mobile users will have the option to track family members’ movements on urban maps if individual relatives give them permission to do so and keep their location-sharing data activated. Previous reporting by Al-Monitor has highlighted an increase in reported domestic violence incidences in Turkey as more families self-quarantine amid the pandemic. Women’s rights advocates warn the expansion of tracking tools could pose risks for people in abusive relationships.

In other coronavirus-related precautions, the Turkish parliament passed a law April 14 to release about 90,000 inmates in effort to reduce the risk of contagion in state prisons. While the initiative is a welcome move amid the pandemic, human rights defenders have criticized the measure for excluding political prisoners, which amount to about 50,000 inmates, and include prominent politicians, journalists and civil society members.

“It is deeply disappointing that the tens of thousands of prisoners in pretrial detention — a measure that must only be used when there are no alternatives to custody — will not be considered for release,” Milena Buyum, a Turkey campaigner for Amnesty International, said in an April 14 statement, “Those convicted in unfair trials under Turkey’s overly broad anti-terrorism laws are also now condemned to face the prospect of infection from this deadly disease.”

On April 13, Turkey’s Justice Minister Abdulhamit Gul announced that 17 Turkish prisoners had been diagnosed with COVID-19 and that three had died from the disease.

by Murielle KASPRZAK and Joseph SCHMID | AFP | May 26, 2022
END_OF_DOCUMENT_TOKEN_TO_BE_REPLACED