The mayors of 11 Turkish cities and scientists tracking the coronavirus pandemic in Turkey say a full lockdown is needed in urban areas to avoid an exponential rise in new infections. 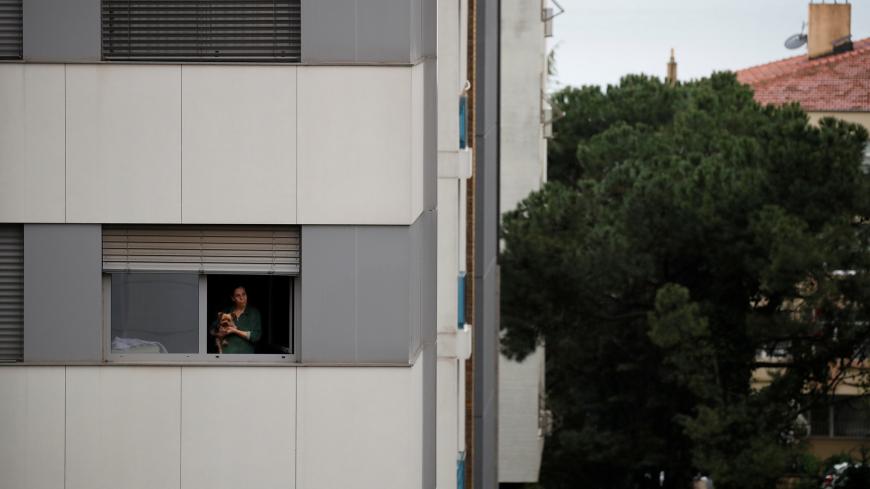 A woman and her dog look out from the window of their home as the spread of the coronavirus disease (COVID-19) continues in Istanbul, Turkey, April 15, 2020. - REUTERS/Umit Bektas

ISTANBUL — A growing number of politicians and scientists are calling on the Turkish government to impose a full lockdown on urban areas to stem the spread of COVID-19 as the nation recorded 74,193 confirmed cases with 1,643 virus-linked deaths Thursday.

Eleven mayors with the opposition Republican People’s Party issued a joint statement today requesting a long-term “curfew or full isolation” be imposed on urban residents to avoid the exponential growth of new infections.

“We again draw attention to the need for this application before losing more time,” stated the co-signers, among whom were Istanbul Mayor Ekrem Imamoglu and Ankara Mayor Mansur Yavas.

To date, Turkish officials have issued a pair of consecutive 48-hour weekend curfews on urban areas, while imposing full curfews for all senior citizens and most people under 20 years of age. Shops, cafes and restaurants have also been closed for weeks as international and domestic travel remains highly restricted, but some experts say the interventions don’t go far enough.

Dr. Ozlem Azap, an infectious disease researcher at Baskent University in Ankara, said the fact many workers continue traveling to job sites on weekdays poses a hazard to the wider population, as they can transmit the disease both on the job and at home.

“For economic reasons, the government is not willing to shut factories and manufacturing centers, but this causes a big problem,” Azap told Al-Monitor. “Two-day curfews are not enough to stop the spread.”

Azap also said that panic-buying on Friday, April 10, after the first weekend curfew was announced hours before implementation, would likely amplify cases of the novel coronavirus in the coming days.

“Generally, more than 80% of people show symptoms in the first week after contact, so we will see the results of Friday’s incident soon,” Azap told Al-Monitor, adding that epidemiological models placed Turkey among 26 nations that would experience a high number of COVID-19 cases globally, “but this was last week, before the events of Friday,” she noted.

According to Turkish Health Minister Fahrettin Koca, about 60% of Turkey’s confirmed cases are located in Istanbul, a city of 16 million people. In a televised interview this February, Koca praised strict lockdown measures applied in Italy and China to contain the virus, but he has yet to take similar interventions in Turkey, a delay that has been repeatedly criticized by people following the pandemic closely, such as Dr. Emrah Altindis, an assistant professor of biology at Boston College.

“As long as there is human interaction, as long as there’s no social distancing between workers, this virus will continue to spread,” Altindis told Al-Monitor.

He added, “If we don’t lock down Istanbul right now, the case numbers might increase exponentially in the next four weeks. We will not be able to control the pandemic and we will reach the limits of the health system’s capacity in Istanbul, specifically."

Five Turkish economists published a paper this week indicating Turkey “faces a 17% economic contraction” if state officials do not pursue stricter lockdown measures. The researchers predicted a full lockdown could contain the pandemic in 38 days and limit GDP declines by 7.8% if a full China-style lockdown is imposed. State officials have so far resisted calls for such measures.

The Turkish health minister has stated a method known as filiation has so far helped stem coronavirus cases by tracking the chain of contacts linking people diagnosed with the disease. Though Koca said Wednesday the rate of increase for new cases “is on a stable trajectory” and that health officials are managing the pandemic effectively, Altindis said he was concerned by current trends in Turkey.

“If you look at Italy or Spain, you will realize the people they lost under 60 years of age [ranges] between two to five,” Altindis told Al-Monitor. “In Turkey, this age group amounts to 20% of total deaths.”

He continued, “In addition, one in 10 people we lose are people under 60 without chronic diseases. If these data are real, this is extremely alarming.”

In related measures, the Turkish Parliament passed a law Tuesday that will release up to 90,000 inmates to reduce the spread of virus in state prisons. Over the last 24 hours, select inmates began leaving state penitentiaries. Among the released was high-profile mafia boss Alaattin Cakici, who has ties with nationalist political leaders in the country.

The prison release bill had been condemned by human rights advocates for previously excluding political prisoners such as politicians, journalists and civil society members. Responding to the law’s passage, European Parliamentary rapporteur on Turkey Nacho Sanchez Amor and chair of the delegation to the EU-Turkey Joint Parliamentary Committee Sergey Lagodinsk, issued a statement calling the refusal to release political prisoners amid the pandemic “a great disappointment.”

“We had hoped that the Turkish Parliament would adopt a fair, responsible and non-discriminatory law that would save lives from being lost in overcrowded Turkish prisons,” the pair wrote in the statement.

by Murielle KASPRZAK and Joseph SCHMID | AFP | May 26, 2022
END_OF_DOCUMENT_TOKEN_TO_BE_REPLACED