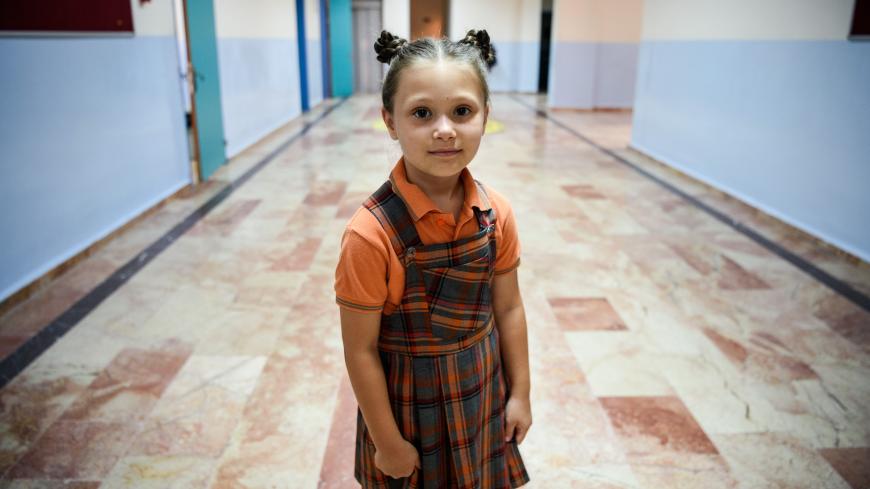 A girl in her school uniform stands in the corridor during the first day back at school on Sept. 19, 2016, in Istanbul, Turkey. - OZAN KOSE/AFP via Getty Images

Schools were scheduled to open Aug. 31, but Education Minister Ziya Selcuk said in a speech Wednesday that students would instead take online courses starting on the same date. Selcuk added private schools could begin online courses as early as Aug. 17.

Medical professionals tracking the pandemic said case numbers have increased since restrictions were lifted in early June and warned infection rates could rise further if strict precautions are not soon implemented.

“I think opening the schools with these numbers will invite disaster,” Emrah Altindis, an assistant professor of biology at Boston College, told Al-Monitor.

Citing a recent study from South Korea that found children over the age of 10 who carried the virus were just as infectious as adults, Altindis said Turkish officials should only reopen schools with strict testing and social distancing measures in place. He also referenced data by the American Academy of Pediatrics, which found 97,000 children in the United States tested positive for COVID-19 in the last two weeks.

“If you take these studies together, you can see this is extremely dangerous for public health,” Altindis told Al-Monitor.

In a recent survey by the Ankara-based Metropoll, 64% of respondents said they felt it was unsafe to reopen schools, citing concerns over the ongoing pandemic.

To date, the nation has recorded about 243,00 COVID-19 cases and nearly 5,900 virus-linked deaths, according to Turkish Health Ministry data. Though initial lockdown measures and curfews helped stem the spread of the virus in the spring, official infection rates have slowly climbed over the summer, with Turkish Health Minister Fahrettin Koca tweeting Tuesday that the number patients in critical condition had increased.

Turkish medical associations warned last week that intensive care units and areas set apart in hospitals for coronavirus patients had reached capacity in the cities of Ankara and Gaziantep. Koca responded to the statements on Twitter Thursday, saying, “There are no cities, not even a single hospital, working at capacity due to COVID-19. Claims are unfounded.”

Still, medical workers have been reporting increased infection rates in Turkey’s Anatolian regions, which are seeing a surge after being relatively spared earlier in the year, when COVID-19 patients were more concentrated in Istanbul.

“We have reached the peak in Diyarbakir,” Dr. Elif Turan, chair of the Diyarbakir Medical Chamber, told Al-Monitor. “We don't know the exact number of cases in Diyarbakir but people on the ground tell us hospitals are working at full capacity and intensive care units are full.”

The spread of the virus has strained not only hospital facilities but also medical workers, many of whom have been overburdened since the pandemic began, said Ibrahim Kara, co-president for Turkey’s Health and Social Service Laborers' Union.

“The number of personnel is quite low and problematic,” Kara told Al-Monitor. “Those who are working in tiring shifts are unable to use their annual leave. They are exhausted.”

To address the rising infection rates, the Turkish Interior Ministry began conducting more inspections of restaurants and cafes last week and increased street monitoring, issuing fines to people without masks in crowded places. Some government officials are also considering the reintroduction of strict social distancing measures similar to those imposed in the spring by mid-September.

Some medical workers attributed the recent rise in COVID-19 cases to holiday travel and family gatherings organized for the Muslim holiday of Eid al-Adha or Kurban Bayrami in late July. Altindis said it was too early to gauge the impact of the holiday on COVID-19 cases and linked the current uptick to the “abnormal normalization process” pursued by Turkey’s Health Ministry.

“The health minister gave the impression the situation was under control in June” when restrictions were lifted, Altindis told Al-Monitor. “Unfortunately, this affected behavior and we saw the increased transmission of the virus. Right now, it’s out of control.”

As in other countries, the pandemic has also led to a slowdown in economic activity in Turkey, where the latest data put labor force participation at 47.6% in the April-June period, falling from 52.9% year-on-year.

While parliament extended a ban on layoffs through July 2021 last month, the nation’s unemployment rate was at 12.91%, or about 3.82 million people, according to the most recent figures from May 2020. The Turkish Employment Agency announced Wednesday it had paid unemployment benefits to roughly 400,000 people in July, down from more than 600,000 people in January.

Lawmakers have sought to relieve the economic downturn by welcoming more international tourists in the hope that cash inflows from visitors will help coastal areas make up for lost revenue earlier in the year. Flights between Russia and Turkey resumed this week after a five-month pause, a move that saw over 23,000 Russian tourists land in the Mediterranean resort city of Antalya on Monday alone.

Yet while vacation season is underway and many hotels report a gradual rise in occupancy rates, which remain below holiday averages, many Turkish citizens will now have to accommodate work and child care needs following the decision to delay school openings.

Turan voiced concerns over future decisions relating to public schools, warning that many educational facilities in the southeast are crowded and pose a risk of infection among families.

“Each city should be evaluated separately, and decisions should be made accordingly in terms of re-opening schools,” Turan told Al-Montior. “Education unions, scientists and families should be a part of decision-making process.”

She added, “Influenza season is also upon us. Combined with Covid, the situation could get worse.”