Turkish health officials are calling for increased precautions to limit the spread of COVID-19 as citizens conclude festivities for the Muslim holiday of Eid al-Adha. 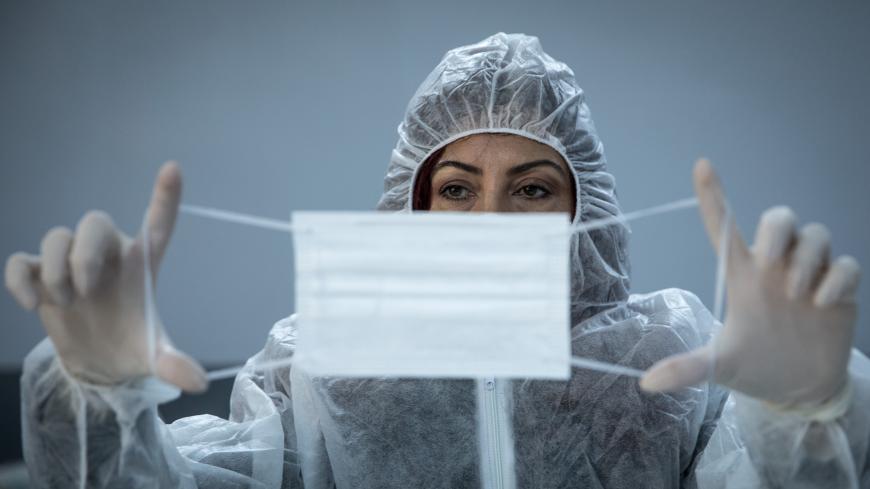 A teacher inspects a newly made surgical face mask amid the COVID-19 outbreak at the Vocational and Technical Anatolian School on April 06, 2020, in Istanbul, Turkey. - Chris McGrath/Getty Images

ISTANBUL — Over the weekend, many Turkish citizens visited family members and popular tourism destinations amid festivities for the Muslim holiday of Eid al-Adha, or Kurban Bayrami. Health officials are now closely monitoring COVID-19 cases, which they expect to rise after the nationwide holiday travel and are calling for the enforcement of new precautions to limit the spread of the coronavirus.

“You don’t need to be an oracle to know this,” Dr. Sinan Adiyaman, president of the Turkish Medical Association (TTB), told Al-Monitor.

Adiyaman said social distancing measures and weekend curfews were “lifted hastily” in June, and new daily recorded cases are floating near 1,000 after falling below 800 on June 2. He credits the rise to the reopening of restaurants and cafes along with increased international and domestic travel, as well as mass prayers marking the conversion of Istanbul’s Hagia Sophia to a mosque on July 24.

To date, Turkey’s Health Ministry has reported about 233,000 COVID-19 cases and nearly 5,750 virus-linked deaths. According to data from Johns Hopkins University, Turkey ranks 17th in recorded cases worldwide and has the 22nd highest death rate.

While national health officials have been lauded for their initial management of the coronavirus, keeping case numbers low through strict curfew measures on schoolchildren and senior citizens, Adiyaman said the continuation of the current lax restrictions may lead to a resurgence of COVID-19 cases, which appear to be rising quickly in the nation’s southeastern regions.

According to TTB data compiled from 65 cities, 300 new coronavirus cases are being recorded daily in Sanliurfa, also known as Urfa.

“The beds allocated for COVID patients are almost full in Urfa,” Osman Yuksekyayla, co-chair the Sanliurfa Medical Chamber, told Al-Monitor, adding he was concerned the upcoming flu season would overstretch medical staff. “If the rise in COVID cases goes on like this, the burden on health workers will increase and there will be a shortage of medical personnel, which was already a problem in Urfa before the pandemic.”

TTB officials are also reporting 300-350 new daily cases in Diyarbakir and that intensive care units are full in the Black Sea city of Sinop. Other cities that have seen sharp rises in new infections include Erzurum, Konya, Rize, Mardin, Canakkale and Zonguldak.

Looking over the rise in infection rates, Adiyaman criticized Turkish Health Minister Fahrettin Koca for downplaying the risk of a second coronavirus wave when restrictions were lifted in June, claiming his statements created “a relaxed mood among people.” Adiyaman told Al-Monitor, “We can say the first wave has not slowed down.”

The Turkish Health Ministry did not respond to requests for comment.

On July 30, the TTB also condemned a decision by the Health Ministry to stop sharing the numbers of intubated COVID-19 patients and those in intensive care. Koca said the decision was made “to abide by international standards” in a July 29 tweet, adding the ministry would instead begin reporting figures on patients in critical condition and the rate of patients with pneumonia.

“In attempting to make sense of why these two parameters have been removed from the table, it is in vain to look at epidemiology,” Adiyaman said in a July 30 statement, adding Turkish officials were not following World Health Organization codes concerning the reporting of virus-linked deaths.

Koca responded to criticism that the changes were implemented following a decision by the ministry’s science advisory committee, though committee member Ates Kara said he did not know the reason for the change, according to Gazete Duvar.

“I’ve been saying every day that the number of seriously ill patients is increasing,” Koca said Aug. 1. “Would someone who is hiding something say that?”

The Diyarbakir Health Platform announced Wednesday that a sharp rise in local cases were not reflected in official data, stating new case incidences in southeastern Turkey number 16.6 per 100,000, more than double the national average.

"The official statistics, which we as health laborers know very well do not reflect the truth, cannot hide the fact that the outbreak is spreading quite rapidly in both our province and other provinces in the region," the body reported in a statement.

Throughout the pandemic, Turkey’s health minister has urged caution, repeatedly prompting citizens to follow social distancing measures and wear masks. Still, he said COVID-19 cases could rise in the coming weeks and may require the re-imposition of previous travel restrictions and curfew measures.

“It’s inevitable for the numbers to turn toward a negative direction if this relaxed mood continues,” Koca said. “Our citizens should rid themselves of this mood before we reintroduce serious limitations. Otherwise, we’d be forced to adopt regional measures once again.”

Meanwhile, the Turkish tourism sector awaits a rise in international visitors after Russia-Turkey flights resumed Aug. 1. Turkey is also accepting tourists from England and the United States, though the nation is not yet on the European Union’s list of safe travel countries.

As the summer season begins to wind down, Turkish health officials are also weighing the risks involved with reopening schools, currently slated to begin the fall session on Aug. 31.

He said health officials would continue studying approaches taken by other countries, noting Israeli schools were briefly reopened and then shut down following a COVID-19 outbreak in one high school. In seeking solutions, Adiyaman pointed to strict social distancing measures, such as those taken in Finland and Belgium, where the reopening of schools has not raised case numbers.

“At a time like this, the opening of schools will only increase the spread of the virus,” Yuksekyayla told Al-Monitor. “Authorities should reconsider the decision to open the schools where the virus is spreading at higher rate.”