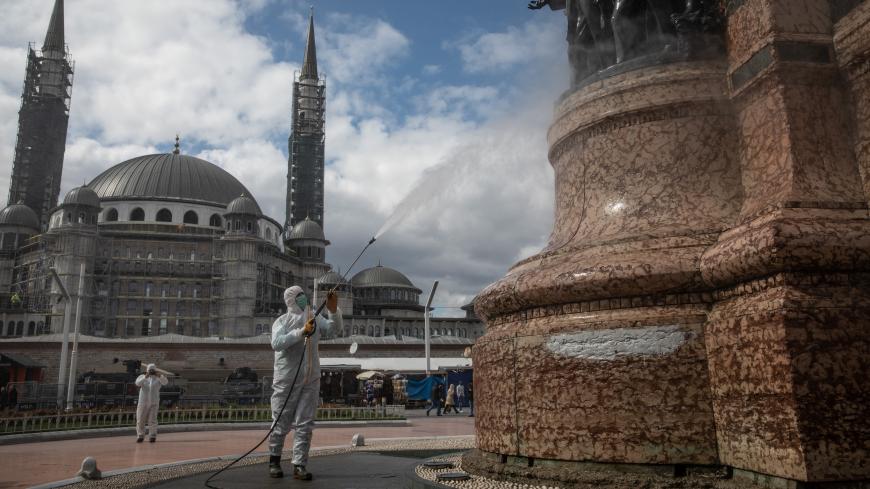 An Istanbul Municipality employee disinfects the Taksim Republic Statue in Taksim Square to prevent the spread of COVID-19 on March 18, 2020, in Istanbul, Turkey. - Chris McGrath/Getty Images

According to the Health Ministry, which since July has reported only symptomatic patient numbers, Turkey saw 7,381 new cases and 161 virus-linked deaths Tuesday, the highest daily rates since the nation’s first confirmed COVID-19 case in March. The figures represent a rapid increase in new daily case numbers, which stood at 3,819 a week earlier.

The news comes after partial weekend curfews were introduced in the country Friday and schools were shuttered through the end of the year. Shopping centers, restaurants and most businesses remain open for limited hours, with partial daily curfews imposed on senior citizens and unemployed people under 20 years of age.

“We are being tested,” Koca tweeted Monday. “Do not leave the house unless you have to.”

Yet Husnu Yildirim, co-president of Turkey’s Health and Social Service Laborers Union, said the current measures are not sufficient to stem the rising infection rates and that health workers “are at the point of exhaustion.”

“The rise [of new cases] in all provinces is not like the first wave,” Yildirim told Al-Monitor. “All clinics have been transformed into COVID-19 service areas. Around 1,000 patients turn to emergency services daily; 70% of them are positive.”

He continued, “The situation seems bad in all major cities, especially in Istanbul and Izmir.”

Istanbul Municipality reported 201 people lost their lives to “infectious disease” on Monday. Though the disease was not specified, the announcement raised concerns over the accuracy of Health Ministry data, which reported a national total of 153 virus-linked deaths on that day.

Istanbul Mayor Ekrem Imamoglu also drew attention to the high number of deaths the city was recording during a speech Monday.

The rise is consistent in the nation’s southeastern region as well. Dr. Elif Turan, chair of the Diyarbakir Medical Chamber, said 2,000-2,500 COVID-19 tests are administered daily in Diyarbakir and about 800-850 come back positive.

“We are not where we were in June or July, when we did not have enough [hospital] capacity, but if this continues we could return to the point where we are not able to find enough space in hospitals,” Turan told Al-Monitor.

According to Health Ministry data, national hospital bed capacity is 54.7% full, a figure that has remained constant for about a week. Intensive care units remain at 71.3%.

Turan added that 1,255 health workers have tested positive in Diyarbakir since the beginning of the pandemic and said more measures are needed to reduce infection rates.

“The weekend curfews do not cover peak socialization hours,” Turan told Al-Monitor. “To reduce positive cases, we need to focus on preventative health services. To break the contamination cycle, we need to reduce socialization.”

Though travel restrictions have yet to be announced in Turkey, the nation’s Health Ministry announced Monday it had finalized arrangements to purchase 10 million doses of a Chinese-developed vaccine for possible delivery in December.

In the meantime, Yildirim called for stricter measures on production and industrial workers, who are currently permitted to continue working under current health guidelines.

He said if the government were “sincere” in its efforts to protect public health, “it would not allow all labor-intensive sectors to work at full capacity without any restrictions.”

According to health data from Johns Hopkins University, Turkey has recorded approximately 450,000 COVID-19 cases and more than 12,500 virus-linked deaths so far this year.