Turkish officials to maintain lighter COVID-19 restrictions through much of the country, as new infection numbers rise and vaccination campaigns continue. 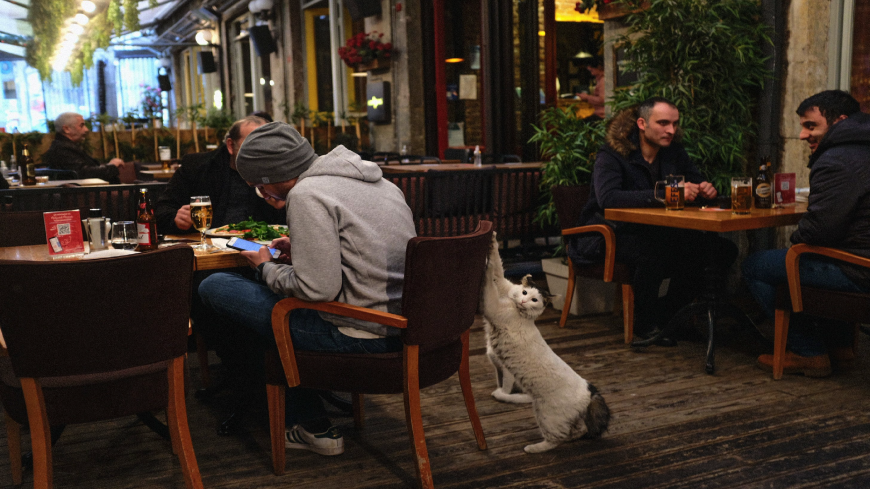 People sit in a restaurant at Karakoy on March 2, 2021, in Istanbul, after the country lifted restrictions measures against the COVID-19 pandemic in regions with lower infection rates. The businesses are allowed to operate at half-capacity between the hours of 7:00 a.m. and 7:00 p.m., as coronavirus restrictions are eased. - BULENT KILIC/AFP via Getty Images)

ISTANBUL — Pushing forward with the normalization drive introduced March 1, Turkish Health Minister Fahrettin Koca said lighter COVID-19 restrictions would remain in place throughout much of the country amid a rise in national infection rates early Tuesday.

"Normalization can be possible by following the measures," Koca said on Twitter, sharing a map of the latest coronavirus data by province in Turkey.

At the start of the month, the Turkish government implemented a national tier system that lifted social distancing measures in lower-risk provinces while maintaining weekend curfews and other restrictions in areas with higher contagion rates. When the system was launched, daily coronavirus cases hovered near 10,000 nationwide, but since then Turkish Health Ministry data has reported a gradual increase in infection rates, logging over 15,500 new cases Monday.

Despite the recent rise in cases, Turkish President Recep Tayyip Erdogan announced the current measures would remain in place following a Cabinet meeting Monday, noting that the number of COVID-19 patients being hospitalized or placed in intensive care units had not increased.

“We decided to continue the current practice in our cities in today’s meeting and to closely follow the developments,” Erdogan said in Ankara Monday, later adding, “God willing, by acting much more consciously and carefully from now on, we will overcome this issue altogether.”

The news comes as Turkish health officials continue a vaccination campaign launched in mid-January. Over the last two months, more than 11.5 million doses of China’s Sinovac vaccine have been administered in Turkey, according to government figures. About 8 million people received the vaccine’s first shot, and nearly 3.6 million citizens have been fully inoculated with the second dose.

Turkey currently ranks sixth globally in total vaccination dose distributions, with about 13% of its population of 83 million having received at least one shot. Speaking Friday, Erdogan said Turkish officials were in discussions to secure a shipment of 50 million Sinovac vaccines while separate negotiations are ongoing regarding shipments of other vaccines, such as the Pfizer-BioNTech vaccine.

“Our major recommendation is data transparency,” Fincanci said via video stream Thursday. “We know that when data is not transparent, it is not possible to get through this.”

During the press event, Fincanci also said 385 Turkish health workers had lost their lives to the virus in the first year of the pandemic. To date, the total pandemic death toll in Turkey stands at nearly 30,000, with about 2.9 million cases recorded over the last year, according to Health Ministry data.

With the vaccine roll-out underway and some restrictions eased under the tier system, Koca urged caution among citizens last week, noting more than 40,000 cases of COVID-19 variants have been recorded in Turkey. The variant originally identified in the United Kingdom was predominant among new strains in Turkey, Koca said Wednesday, while a small number of variants from South Africa, Brazil and New York have also been recorded.

The most recent pandemic data shows the nation’s most concerning infection rates remain along Turkey’s northeastern Black Sea coast, with the province of Samsun logging the highest number of new cases last week, followed by neighboring provinces such as Sinop, Giresun and Ordu.

In the same set of data, Turkey’s southeastern provinces recorded some of the lowest new case rates, including Siirt, Sirnak and Hakkari. The southeast region’s largest city, Diyarbakir, has also seen lower infection rates in recent weeks after a spike in the summer that left some hospitals scrambling for bed space.

Dr. Elif Turan, chair of Diyarbakir Medical Chamber, said the province was recording lower numbers of COVID-19 cases in recent weeks due to the combined impacts of both the summer outbreak and a decline in test numbers.

“In our city, almost half of the population contracted this disease after June 1, 2020,” Turan told Al-Monitor. “In a study by the Health Ministry last December, an antibody positivity rate of 38-40% was detected in Diyarbakir citizens,” which might be contributing to lower rates presently.

Turan said heightened awareness and reduced movement in the winter months may have also reduced new infections, but she noticed a “large decrease” in test numbers administered in Diyarbakir.

“Testing was taken from contact persons upon complaint only,” Turan told Al-Monitor. “Since the number of tests decreased, the number of positive results also decreased.”

She said the easing of measures after March 1 was “a source of anxiety” and said she feared case rates would rise once again, as they did after a normalization drive in June last year that led to a spike in new infections.

by Murielle KASPRZAK and Joseph SCHMID | AFP | May 26, 2022
END_OF_DOCUMENT_TOKEN_TO_BE_REPLACED