With the Turkish government expected to begin mass distribution of the Chinese-made COVID-19 vaccine Sinovac this week, health experts are questioning its effectiveness and the state’s rollout strategy. 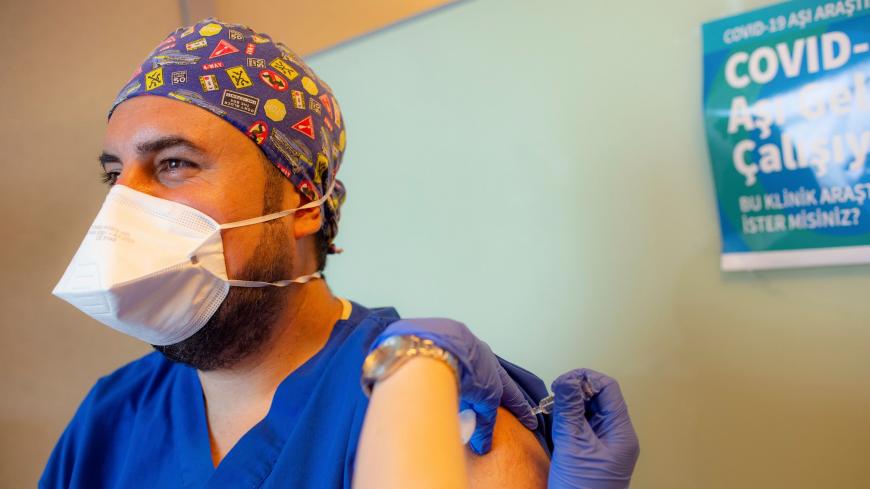 A health worker administers a dose of the Sinovac Biotech vaccine against COVID-19 to Dr. Cem Gun (L) during the 3rd phase trials at the Acibadem Hospital in Istanbul, on Oct. 9, 2020. - YASIN AKGUL/AFP via Getty Images

ISTANBUL ­— The Turkish government is expected to begin mass distribution of a COVID-19 vaccine produced by China’s Sinovac Biotech this week as questions remain over its efficacy rate.

The rollout is expected to begin Thursday or Friday if testing by the Turkish Medicines and Medical Devices Agency delivers positive results today. An interim analysis last month by Turkish researchers found the Sinovac vaccine to be 91.25% effective while preliminary tests in Indonesia showed a 65% efficacy rate, leading officials there to grant the vaccine emergency approval Monday.

Previously, final-stage trials in Brazil found the vaccine to be 50.38% effective, though Sinovac CEO Yin Weidong told reporters Wednesday the disparity was caused by the participation of high-risk medical workers in the Brazilian study.

The developments come as Turkey is expected to receive 10 million doses of the Sinovac vaccine in the next two weeks, adding to three million doses received late last month. Turkey has contracted to purchase a total of 50 million Sinovac doses. State officials have also agreed to procure 4.5 million doses of the Pfizer-BioNTech vaccine, which has been found to have a 95% efficacy rate.

Turkish Health Minister Fahrettin Koca said Tuesday he hopes the coming inoculation drive will further decrease infection rates, which have been in steady decline following the imposition of weekend curfews and social distancing measures across the country.

“After a long period, the daily number of patients decreased to less than 1,000,” Koca tweeted Tuesday. “The number of patients in critical condition continues to drop. We will proceed to vaccination, continuing to comply with the restrictions and measures.”

In early December, Turkish officials imposed nightly curfews on weekdays and full curfews on weekends for most citizens to stem a rising number of COVID-19 cases. Schools, restaurants and bars have been closed since fall.

Such measures have proven successful at curbing new infections in recent weeks, and if the positive trends continue throughout the rollout of vaccination programs, restrictive measures will be gradually lifted, Turkish President Recep Tayyip Erdogan said Monday.

“Until a lasting solution is found for this problem, we must continue to lead our lives with restrictions,” Erdogan said following a cabinet meeting in Ankara Monday, adding, “Surely, we will gradually lift the restrictions once the infection numbers fall below a certain figure.”

Still, some Turkish health experts have criticized the Turkish government’s management of pandemic since the Health Ministry left asymptomatic case figures out of official COVID-19 data between July and November. Dr. Sebnem Korur Fincanci, chair of the Turkish Medical Association’s Central Committee, said transparency issues continue with the rollout of the Sinovac vaccine.

“We do not have the full scientific results for the Sinovac vaccine; they are limited and a bit confusing regarding the efficacy,” Fincanci told Al-Monitor. “However, we do not have concerns regarding safety since phase two results were published and discussed by scientists.” She added, “We still need a broader view of all results” from Sinovac trials.

Fincanci said there were “serious problems” with the government’s vaccination plan and that public trust in state institutions remained low after data discrepancies last year.

According to pro-government media outlets, more than one million Turkish health workers and citizens over 65 years of age will be vaccinated first. Essential workers such as teachers and security personnel will be vaccinated next and other citizens will receive doses based on their exposure risk. The Sinovac vaccine requires two shots administered 28 days apart and Turkish health officials said they would publish inoculation data in real time.

To facilitate the rollout, heath care workers have been prompted to make vaccination appointments through an online system or a hotline. Husnu Yildirim, co-president of Turkey’s Health and Social Service Laborers Union, criticized the digital system, saying it was subject to data security issues and could complicate future integration with existing Health Ministry recordkeeping protocols.

“It's better to get vaccines in family health centers and hospitals, and get them, as we have done for many years, integrated into the Ministry of Health's vaccination records,” Yildirim told A-Monitor. He added, “In this system, we could see whether a health worker had COVID-19 and whether they could be vaccinated depending on their health condition. That would increase the reliability of the vaccination process.”

About 92 million cases of COVID-19 have been recorded worldwide and nearly two million deaths have been linked to the virus over the last year, according to pandemic data from Johns Hopkins University. Turkey ranks seventh globally in recorded cases at 2.35 million and 18th in virus-linked deaths, which are currently over 23,000.