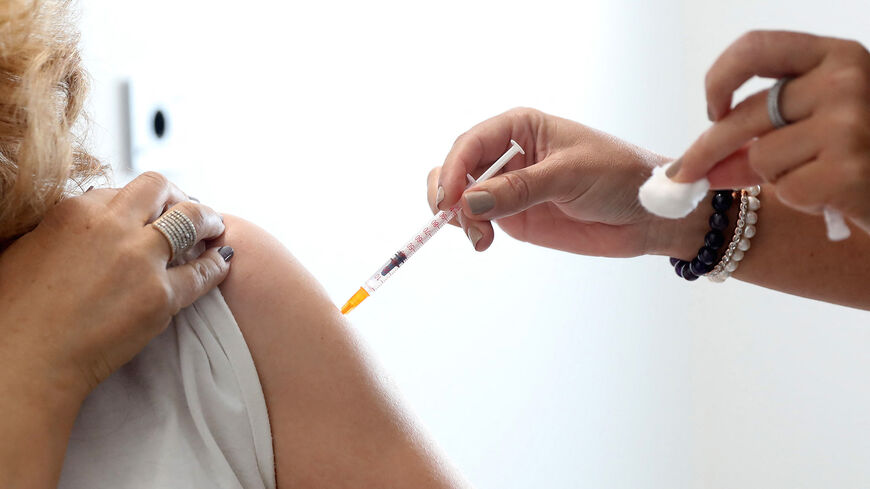 A woman receives a dose of the Pfizer BioNTech vaccine against COVID-19 at Ankara City Hospital, in Ankara, Turkey, on June 7, 2021. - ADEM ALTAN/AFP via Getty Images

Long lines were reported outside vaccination clinics across the country Wednesday after eligibility requirements were expanded to include all workers registered with the state’s social security system as well as citizens over 40 years of age.

Turkish officials signed an agreement last month with Pfizer-BioNTech for the delivery of 90 million vaccines, though details on shipment dates have yet to be publicized.

“I think that the acute period of the pandemic is nearing its end and we are starting to see the light at the end of the tunnel,” Koca told Kulge Tuesday.

Since Turkey’s vaccination campaign launched in mid-January, roughly 36 million doses of COVID-19 vaccines have been administered with about 14 million people receiving the two doses required for full inoculation, just under 16.7% of the nation’s 84 million citizens.

Turkey has mainly used the BioNTech and China’s Sinovac vaccine as officials remain in negotiations to secure deliveries of Russia’s Sputnik V vaccine.

Husnu Yildirim, co-president of Turkey’s Health and Social Service Laborers Union, welcomed the surge in vaccinations, but called on the Health Ministry to be more transparent with vaccine acquisition and to be more proactive against the misinformation that has led some citizens to avoid inoculation.

“The ministry says they have purchased enough vaccines but do not elaborate on how many and which ones,” Yildirim told Al-Monitor. “I think there is a deficiency in information in this regard.”

Yldirim also said a health care staffing shortage led to long lines at some clinics and that more medical workers would need to be hired.

“There are serious problems because from early morning to midnight you can make appointments at clinics with only two staff members working,” Yildirim told Al-Monitor. “Vaccination locations could be increased and expanded to several places as a solution.”

The strain on vaccination clinics has led to backlogs in some areas and a 200-meter-long line was reported outside the Bagcilar Training and Research Hospital in Istanbul Tuesday. The rush for jabs comes after vaccination eligibility was first extended Friday to include food venue workers, drivers, barbers, hairdresser and lawyers before including all citizens over 40 on Saturday.

Vaccine eligibility was then opened to all employees registered with Turkey’s social security system Tuesday, and on Wednesday evening Koca announced all citizens 35 years of age and up would be able to get vaccination appointments starting Thursday.

Dr. Elif Turan, chair of the Diyarbakir Medical Chamber, said the rising immunization trends would help bring COVID-19 under control in Turkey and called for more citizens to get their jabs.

“Despite the delay in vaccinations, it is pleasing that it has accelerated in the last few days,” Turan told Al-Monitor. “The criteria for vaccines should be removed as soon as possible and everyone over the age of 18 should be vaccinated quickly.”

Diyarbakir and other provinces in Turkey’s southeastern region witnessed a spike in infections last summer, but new daily cases have fallen in recent weeks following a 17-day nationwide lockdown this spring. Still, Diyarbakir health workers reported a 10% positivity rate in daily tests in the province this week, according to Turan.

Earlier this month, Turkish health officials loosened most social distancing measures, partially reopening most schools and food venues across the country. Some restrictions remain in place, including a nationwide curfew from 10 p.m. to 5 a.m. between Monday and Saturday, while full lockdowns are imposed on Sundays.