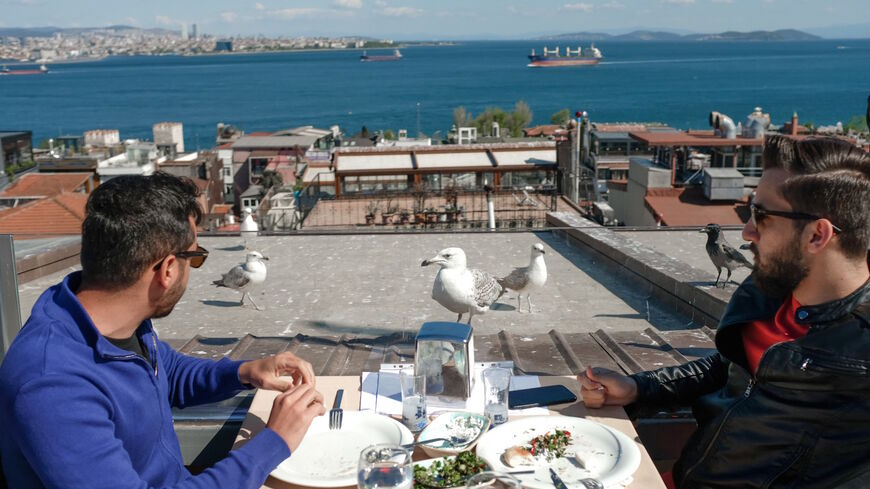 Tourists have a meal at a restaurant at Sultanahmet in Istanbul during a new lockdown aimed at fighting a surging third wave of COVID-19 infections, Turkey, May 9, 2021. - Bulent Kilic/AFP via Getty Images

ISTANBUL ­— New daily coronavirus cases fell below 7,000 this week for the first time since February, prompting officials to further ease social distancing measures June 1. The news comes after a strict nationwide lockdown last month led to a significant drop in new COVID-19 infections, which fell from more than 60,000 in April, according to Health Ministry data.

Late on May 31, Turkish President Recep Tayyip Erdogan announced the lighter measures, including a partial lifting of weekend curfews and the reopening of food venues to a limited number of customers. For the first time in months, most Turkish citizens will now be able to go outdoors on Saturdays while nightly weekday curfews have been pushed to 10 p.m., up from 9 p.m. previously.

While announcing the new guidelines, Erdogan focused on the nation’s vaccination campaign, saying efforts would be accelerated to reach more citizens through new agreements with a variety of vaccine companies.

“We will do our utmost to make June a month of vaccine mobilization,” Erdogan said.

Since mid-January, Turkish medical workers have administered over 29 million doses of COVID-19 vaccines, with about 12.5 million of the nation’s 84 million citizens attaining full vaccination. To date, Turkey’s vaccination drive has mainly used China’s Sinovac vaccine and suffered some supply issues that slowed the planned spring roll-out.

Promising a turnaround, Turkish Health Minister Fahrettin Koca said citizens over 50 would begin getting the jab June 1, and that the nation would receive 12 million doses of the Pfizer-BioNTech by the end of next week. The shipment would be part of a May agreement between Turkey and BioNTech to receive 120 million doses of the company’s vaccine this year.

“If we have a total of 30 million doses of the BioNTech jab [in the coming weeks], we can widen the scope of the inoculations to cover more age groups by the end of the month,” Koca said May 31.

Some health experts have criticized the government’s management of the pandemic, claiming more severe social distancing measures were implemented late into the outbreak, possibly prolonging an economic slowdown and a drop in tourism numbers this year.

“In pandemic times, schools should be closed,” Bulut told Al-Monitor. “Before they reopen teachers should be vaccinated. This is the main problem and at the moment, as we understand, the majority of teachers haven’t been able to get the vaccine.”

He noted that most manufacturing and industrial workplaces stayed open during the nationwide lockdown in May, and that such areas have been the primary source of new infections. In addition, Bulut said about 75% of new cases in Turkey are caused by COVID-19 variants, the most prevalent of which is currently the more infectious British mutation.

Bulut added that health experts with the TTB continue to doubt the accuracy of Health Ministry data.

“Regarding cases, we don’t believe the numbers are correct. Probably we should multiply the official rate by three,” Bulut said, adding that death rates logged by Turkish municipalities were significantly higher than pre-pandemic averages and did not match virus-linked death counts in Health Ministry data.

To date, Turkey’s Health Ministry has recorded about 47,500 deaths due to COVID-19, and 5.25 million cases. The country currently ranks ninth worldwide in new cases over a seven-day period, down from fourth place in April ahead of the nationwide lockdown.