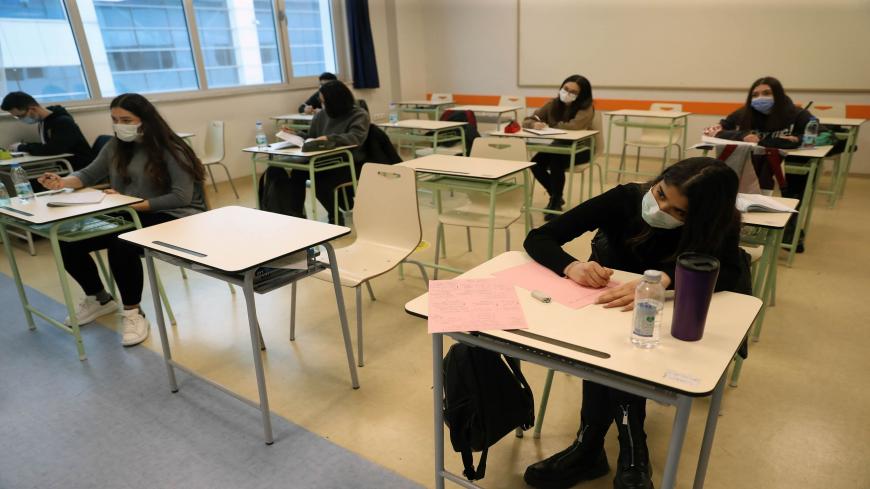 Students wearing protective face masks attend a lesson at a private school in Ankara, amid the crisis linked with the coronavirus pandemic, Turkey, Feb. 15, 2021. - Adem Altan/AFP via Getty Images

ISTANBUL — About half of Turkey’s 18 million school-aged students are expected to resume face-to-face education March 1 as schools reopen for the first time since a two-month session in the fall. The move comes amid broader normalization efforts by the Turkish government to phase out of the coronavirus restrictions in low-risk areas amid an ongoing vaccination campaign.

Turkish Education Minister Ziya Selcuk announced the decision Feb. 24 while receiving his first shot of the Chinese-made CoronaVac vaccine during a ceremony marking the launch of an inoculation drive for the nation’s 1.25 million school workers.

“We can perfectly run face-to-face education without any problems,” Selcuk told reporters in the northern city of Corum. “Our schools are ready.”

The news might come as a relief for some working parents unable to meet child care needs as well as students who have been unable to participate in remote learning courses through the Education Ministry’s online class portal. Yet educators and health experts warn school reopenings may be premature amid national COVID-19 infection rates, which surpassed 9,000 daily cases this week for the first time since mid-January.

“Teachers and school personnel should first be vaccinated. Social distancing guidelines for schools should also be established and made public,” Bulut added, saying the number of students to be allowed per classroom remained undefined.

Many of Turkey’s rural schools resumed in-class education Feb. 15, and under the upcoming school reopening drive students in primary school along with eighth- and twelfth-grade students would return to classrooms across the country on March 1. Turkish schools were initially closed in March 2020 due to the coronavirus pandemic, and then reopened briefly between September and November before shuttering once more.

Since Turkey launched a national vaccination campaign Jan. 14, 7.66 million CoronaVac doses have been administered according to Health Ministry figures. On Wednesday, state officials announced the first phase of the inoculation campaign had been completed, in which  medical workers and citizens over 65 years of age were vaccinated.

In the campaign’s second stage, essential workers and state employees, including teachers, will get the jab. Feray Aytekin Aydogan, a first-grade teacher in Istanbul and member of Turkey’s Education and Science Workers Union, said back-to-school programs should follow guidelines laid out by health officials and members of the scienctific community.

“If they reopen schools as they did in November, then they will just have to be closed again,” Aydogan told Al-Monitor. “In the first reopening, we lost several teachers as a result of COVID-19 infections.”

Taking the risks associated with in-class education into account, Aydogan also noted many students had fallen behind in coursework since schools shuttered due to lack of internet access or barriers faced by special needs students, as well as students whose mother tongue is not Turkish.

An August 2020 report by UNICEF found one in three students globally were missing out on remote learning courses amid pandemic school closures, and Aydogan said similar rates have been recorded in Turkey.

To date, Turkey’s Health Ministry has recorded more than 2.65 million coronavirus cases and over 28,000 virus-linked deaths. Turkish Health Minister Fahrettin Koca this month announced the launch of coronavirus case data by region for the first time since the pandemic began.

Recent figures show a surge in COVID-19 cases in the nation’s northeast Black Sea provinces, five of which last week accounted for 17% of all new infections in Turkey, while they make up 9.46% of the nation’s population. The developments prompted the governor of Ordu to ban home visits in the province.

This comes as government officials plan to launch a province-by-province tier system on March 1 to better publicize and track regional COVID-19 infection rates.

Bulut said normalization efforts were premature for most regions, but social distancing restrictions could be lifted in low-risk areas based on local infection trends. Still, he warned herd immunity, or what he says is more accurately defined as “community immunity,” was far off for Turkey as 70% of citizens would need to be vaccinated.

“Right now, Turkey is at 1% community immunity because about 2 million second shots have been administered and these shots provide protection three to four weeks after they are given,” Bulut told Al-Monitor. “We need another 69% if we want to live normally.”