Turkey passed a milestone Wednesday, announcing half of its adults are fully vaccinated, though COVID-19 rates remain near a three-month high, likely due to the fast-spreading Delta variant. 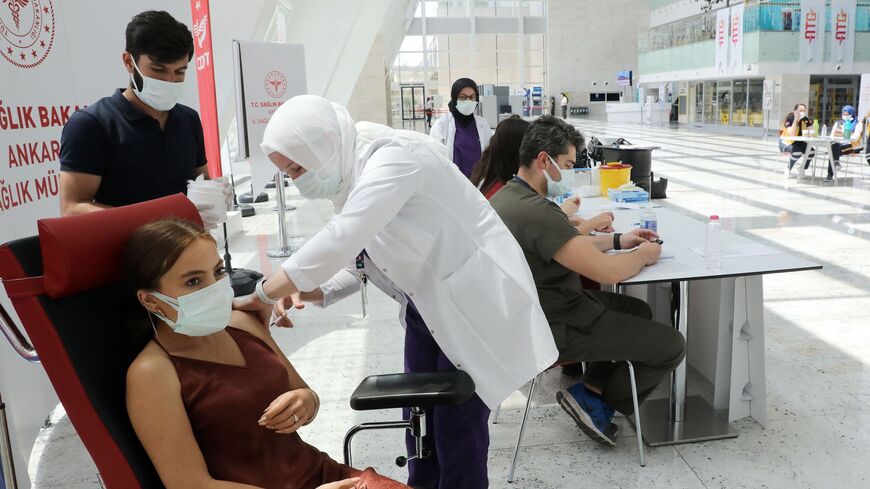 A woman receives a dose of vaccine at a vaccination center against COVID-19 set up at Ankara High Speed Train Station on June 28, 2021, in Ankara, Turkey. - ADEM ALTAN/AFP via Getty Images

ISTANBUL — More than half of Turkish citizens over 18 years of age are now fully vaccinated, the nation’s health minister announced Wednesday. New COVID-19 cases remain near a three-month high, with 27,356 new infections reported the same day.

Over the last week, the number of recorded daily cases hovered around 25,000, rates not seen since early May, when a 17-day nationwide lockdown was imposed to stem surging coronavirus infections. A combination of social distancing rules and curfews this spring helped bring daily case rates down to about 5,000 in late June, leading state officials to lift most restrictions and pursue normalization measures on July 1.

Yet new infections are surging once more in Turkey, as they are globally, with some health experts saying the current spike is most likely caused by the more infectious Delta variant. The link remains unconfirmed as the nation’s Health Ministry has yet to publicize detailed data on COVID-19 strains currently active in Turkey, said Dr. Vedat Bulut, head of the executive committee of the Turkish Medical Association.

“Variations cannot be known yet in Turkey because the government and Health Ministry have not declared the presence of variations by cities or provinces,” Bulut told Al-Monitor.

The lack of transparency in COVID-19 data reporting is believed to be part of the reason behind the British government’s decision last week to keep Turkey on its "red list" of travel restrictions for UK citizens.

More than 31.02 million adults in Turkey have been fully vaccinated, while about 6 million received a third booster shot, according to Health Ministry data. Turkey’s vaccination campaign, which began in mid-January, has accelerated in recent months, though some vaccine hesitancy remains among a minority of Turkish citizens, with recent surveys indicating about 15% of respondents remain unsure about vaccine safety, Bulut told Al-Monitor.

Bulut said the hesitancy was caused primarily by misconceptions or lack of information, which he said provincial medical chambers are working to address through public education campaigns in areas most affected by the coronavirus.

Currently, the provinces with the highest case counts per capita are clustered in Turkey’s southeastern region, with Siirt, Diyarbakir and Bingol hosting the largest number of new infections in descending order, according to Turkish Health Ministry data. The same provinces are among those with the lowest vaccination rates in the country.

Dr. Elif Turan, chair of the Diyarbakir Medical Chamber, said an average of 2,000 positive COVID-19 cases are being recorded daily in Diyarbakir, putting an increasing strain on local hospitals and medical clinics.

“The number of hospitalized patients is increasing day by day,” Turan told Al-Monitor. “Previously closed services were reopened [in health clinics], and the areas that were reopened fill up immediately.”

Turan said some hospitals have reduced bed space for non-COVID patients to accommodate those with recent infections. She also noted a recent study in Diyarbakir found 80-90% of new COVID-19 patients in local hospitals were unvaccinated, while nearly all the remaining COVID-19 patients had received only partial vaccination.

The findings echoed a similar study in Erzurum, in which 90% of 589 patients receiving intensive care treatment for COVID-19 had not been vaccinated. Most of the remaining 10% of patients had received one vaccine dose.

“There is not a single intensive care patient in the hospital who has received two doses,” said Erzurum Provincial Health Director Gursel Bedir while announcing the study results Monday.

In light of recent COVID-19 trends, the Republican People’s Party spokesperson Faik Oztrak said Monday the state must accelerate its vaccination campaign to reach herd immunity and avert more severe outbreaks. Oztrak also called for clear pandemic guidelines regarding public schools as classes are expected to resume on Sept. 6 with at least partial face-to-face instruction in some areas.

Arguing Turkey was “one of the countries that kept schools closed for the longest period of time during the pandemic,” Oztrak prompted state officials to vaccinate all teachers and school staff ahead of the fall session to better facilitate in-person classes and ensure students lacking the means to join online courses do not miss out on further coursework.

“Turkey does not have the luxury of losing this education period as well,” Oztrak said Monday. “Otherwise, the risk of lost generations will increase even more. For this reason, if there are problems in the vaccination of teachers and staff in schools, they must be eliminated immediately.”

Amid the recent spike in new COVID-19 cases, the Hurriyet Daily News reported Tuesday unnamed state officials said social distancing policies were not likely to change during peak tourism season, though new measures might be implemented on indoor venues in the second half of September.

A separate report by the pro-government newspaper Daily Sabah indicated the Turkish government would not impose new restrictions before October.

The Turkish Football Association announced Tuesday that adult spectators will be required to show proof of full vaccination to enter sports stadiums for matches, which will take place at 50% seating capacity.