Nearly 18 months of coronavirus and a growing vaccination campaign has left many in Turkey careless about the risks of new variants of COVID-19. 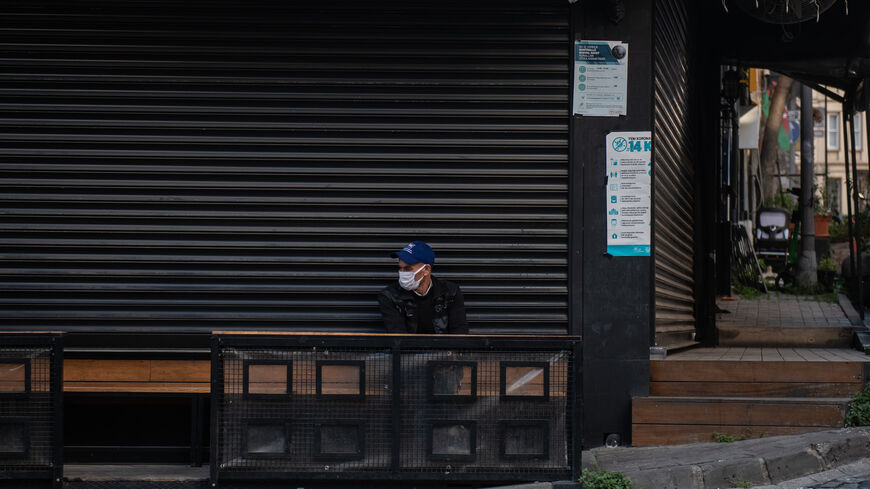 A man wearing a face mask sits in front of an closed shop during a three-week nationwide coronavirus lockdown on May 6, 2021, in Istanbul, Turkey. - Burak Kara/Getty Images

ISTANBUL — Health Minister Fahrettin Koca sent a heartfelt plea on Thursday to his fellow Turks in a bid to boost COVID-19 vaccination.

“Let’s call our loved ones in Urfa today and ask them how they are,” he tweeted. “Let’s talk about the first dose of the vaccine. Sanliurfa is our only province still in the red. The vaccination rate is low and the risk level too high.”

Since relaxing most COVID-19 restrictions on July 1, the government has focused on an accelerated vaccination program in a race to achieve population immunity as soon as possible.

The drive has seen a rise in vaccination rates — at least 65% among over-18s across most of the country — but experts still warn it is not enough.

The southeast shows the lowest rates of vaccination and Sanliurfa province has the worst record, with just 53.8% of over-18s receiving their first dose.

“The rate of completed vaccination to the total population in Turkey is 42%, compared to 56% in European Union countries and 51% in the United States,” said Dr. Haydar Can Dokuyan, a board member of the Ankara Medical Chamber and a doctor at Dr. Nafiz Korez Sincan State Hospital.

“Vaccine hesitancy is common and the Ministry of Health isn’t making enough efforts to vaccinate.”

He added, “A vaccination program should have been started with family physicians and the ministry should have supported it with a stronger campaign on television and social media.”

Low vaccination rates have led to fears that a “pandemic of the unvaccinated” could lead to a fourth wave in the fall.

Rising infections since restrictions were relaxed — from below 5,000 a day in early July to around 20,000 daily cases currently — have been blamed on overconfidence in the effectiveness of vaccines and “COVID weariness.”

While previously police would issue fines of 900 Turkish liras ($107) to people not wearing masks in public, now it is common to see even police officers on the streets without a mask covering their nose and mouth.

“People are ignoring warnings to wear masks and practice social distancing even if they have been vaccinated,” said Vedat Bulut, general secretary of the Turkish Medical Association.

“People are fed up with 16 months of living with restrictions so they are less strict about taking precautions.”

The leap in Turkey’s infections saw the United States place Turkey among high-risk countries last week, advising people not to travel there.

The Delta variant now accounts for more than 90% of new cases, Koca said last week. The mutation, which was first identified in India, is more than twice as contagious as earlier forms of the virus and some studies suggest it has more severe symptoms.

“The health administration does not emphasize how dangerous a disease COVID still is,” Dokuyan said. “The spread of the Delta variant, the increasing number of cases and deaths is alarming.”

Questions over the effectiveness of the Chinese vaccine Sinovac — the most widely administered vaccine in Turkey — against the Delta variant has led to Sinovac patients seeking a third dose of Pfizer-BioNTech’s vaccine.

According to the Health Ministry, some 47 million people have received their first vaccination, 36 million the second dose and 8 million a third dose. Turkey’s population is 84 million.

“For community immunity to be achieved, 85% of the total population should have at least two shots. That’s the critical threshold,” Bulut said. “If 36 million have received a second shot, that’s not sufficient.

“In intensive care units, the patients are all unvaccinated or vaccinated with Sinovac.”

With the opening of schools, health professionals fear a coming spike in cases.

“It’s a dangerous and worrying time,” said Bulut. “We could see another wave from September to December with 30,000 daily cases unless we successfully vaccinate 85% of the population.”