Turkish President Recep Tayyip Erdogan said Wednesday a nationwide lockdown would be gradually lifted as planned on May 17, though health experts urged caution amid a vaccination campaign slowed by supply hurdles. 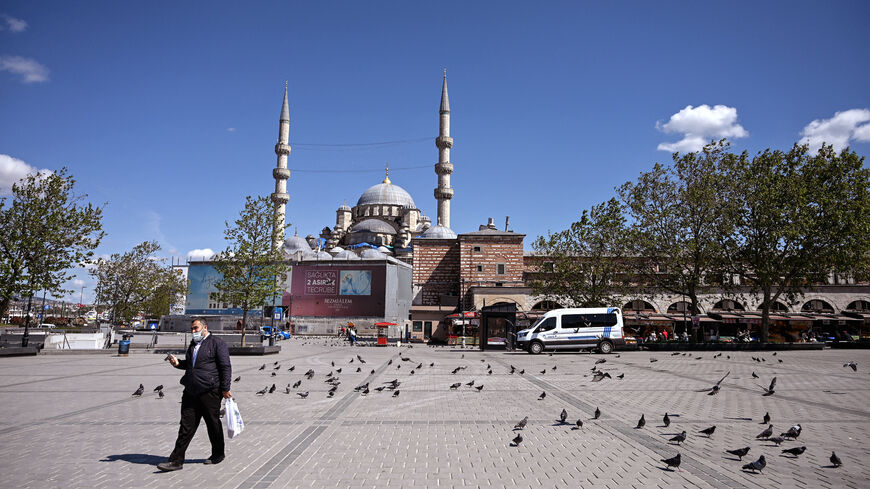 A man walks across the deserted Eminonu Square in Istanbul on May 9, 2021, during a new lockdown to stem a third wave of COVID-19 infections. - OZAN KOSE/AFP via Getty Images

ISTANBUL — Nearly two weeks into a 17-day nationwide lockdown, Turkey has seen new daily COVID-19 cases fall by more than half to under 15,000 since tight social distancing measures were imposed in late April. The restrictions, which closed most businesses and kept nonessential workers home, have led to steep declines in new infections, prompting state officials to move forward with a planned easing on May 17.

In a video message marking the end of the Islamic holy month of Ramadan and the start of the Eid al-Fitr holiday, Turkish President Recep Tayyip Erdogan said Wednesday the nation would gradually lift the lockdown after the festivities.

"Hopefully, by bringing the pandemic under control, we will take normalization steps in a controlled manner after Eid,” Erdogan said, adding, “Good days are ahead even though we are having a bitter holiday due to the problems caused by the pandemic.”

Turkey’s Interior Ministry is expected to outline new pandemic guidelines in the coming days, though health experts urged caution as the nation faces a slowdown in vaccine distribution that could reverse recent gains in stemming new COVID-19 cases.

Dr. Sebnem Korur Fincanci, chair of the Turkish Medical Association and an internationally recognized forensics expert, said Turkey’s health system has the capacity to administer 1-2 million vaccines per day, but on average has been issuing about 200,000 shots daily due to supply issues.

To date, Turkey has received 25 million of 100 million doses from China’s Sinovac and about four million doses of the Pfizer-BioNTech vaccine, according to the Health Ministry. A new batch of Sinovac vaccines arrived in Turkey Wednesday, though the quantity yet to be announced.

State officials have signed agreements to receive additional vaccines as well as licenses to produce the CoronaVac and Russia’s Sputnik V vaccine locally in the near future, but Fincanci said the details of such contracts have not been shared publicly.

“In Turkey, we are in a totally dark space without any transparency,” Fincanci told Al-Monitor. “Unfortunately, the Turkish community has lost their trust in the government’s fight against the pandemic because they have hidden so many facts from the public and have continued to hide the truth.”

Turkish Health Minister Fahrettin Koca said more vaccines would soon be made available and underlined the success of the ongoing lockdown, tweeting Tuesday that infection rates had fallen by 65% in Istanbul.

Other provinces that saw the steepest declines in new infections over the last week include Kirklareli, Canakkale, Duzce and Tekirdag. The positive trends saw Turkey fall from the fourth highest global COVID-19 case and death counts to fifth in daily cases and ninth in daily deaths on average over the last seven days.

Still, Fincanci and representatives of Turkish labor unions said the declines would have been even steeper if Turkish officials had not exempted manufacturing and construction workers from the lockdown measures. Ahead of the nationwide curfew, the Confederation of Progressive Trade Unions of Turkey estimated at least 60%t of employees would continue working through the lockdown.

The rollout of some restrictions in Turkey’s lockdown measures also sparked controversy, including a ban on alcohol sales during the 17-day curfew, which critics said was a state attempt to impose conservative values on society.

Ozgur Aybas, head of a Turkish liquor store association, said the alcohol restrictions led to the permanent closure of up to 20 stores as owners struggled to pay debts amid the slump in sales.

“The banks are open but the shops are closed, so how are we supposed to make money to pay our debts to those banks?” Aybas asked during a phone interview with Al-Monitor.

Aybas said the Turkish government should provide more financial relief to store owners impacted by the pandemic, adding he feared rumors that new regulations on alcohol sales in the near future could pose further troubles for an estimated 150,000 liquor distributors in the country.