Mosques, restaurants and stores prepare to gradually reopen with new coronavirus precautions in Turkey after four-day nationwide curfew for the Muslim holiday of Eid al-Fitr. 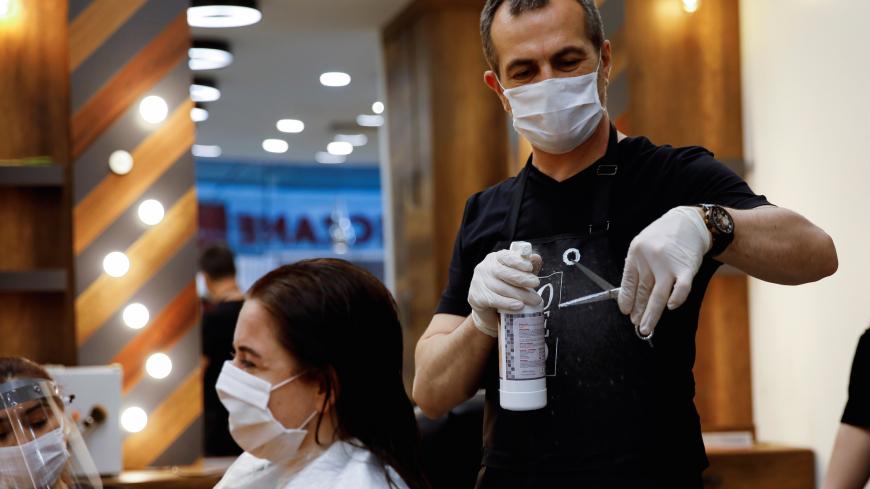 Hairdresser Oguz Kutlu disinfects scissors as he works on his customer Pinar Ersin, both wearing protective masks, on the first day of the reopening of his hair salon, which was closed since March 21 amid the spread of the novel coronavirus, in Istanbul, Turkey, May 11, 2020. - REUTERS/Umit Bektas

ISTANBUL — Turkish families normally come together for the Muslim holiday of Eid al-Fitr to mark the end of Ramadan, but this year most stayed apart, observing a four-day nationwide curfew imposed to stem the spread of the novel coronavirus.

The curfew ended midnight Wednesday and may be the last of its kind as state officials ease restrictions in the country, which has seen new infection numbers decline in recent weeks. Now mosques, restaurants and stores are preparing to reopen in the coming days, but Health Minister Fahrettin Koca said Wednesday some preventive measures will remain in place.

“Returning to the days before the first case of coronavirus occurred in the world?” Koca asked in a tweet. “This does not seem possible yet. We must be vigilant.”

In a separate tweet, Koca added that curfews on senior citizens and people under 20 years of age would continue until further notice. The mixed measures come as Turkey ranks ninth worldwide in confirmed COVID-19 cases and 14th in virus-linked deaths, according to John Hopkins University data. To date, Turkish health officials have recorded 159,797 cases in the country and 4,431 deaths.

With new infection rates hovering around 1,000 per day, the nation is poised to return to some sense of normalcy in an effort to avoid long-term economic damage from the virus. Mosques will partially reopen Friday and Istanbul’s Grand Bazaar shopping center is preparing to reopen Monday, nearly two months after shutting its doors.

Retail shops will also gradually resume regular business hours under new social distancing measures announced by the Health Ministry Wednesday. The strict guidelines will require customers to wear face masks in most shopping areas and limit the number of people inside stores based on square footage. Restaurant owners expect to reopen food venues by mid-June.

Dr. Bulent Nazim Yilmaz, secretary general of the Turkish Medical Association (TTB), said social distancing measures and a string of urban curfews over the last two months have decreased the spread of the coronavirus in Turkey, but expressed concern that restrictions were being eased prematurely.

“We believe the situation must be monitored a little longer and the restrictions should be followed, again a bit longer to see the trend lines of the virus,” Yilmaz told Al-Monitor. “We think that allowing the opening of locations where mass gatherings happen, like mosques or restaurants, could increase the problem.”

He added, “It seems like financial concerns are prevailing over health concerns.”

State officials are considering lifting a ban on inter-city travel by early June. Since April 3, travel restrictions have been in place on major urban areas, but Turkish citizens may soon be able to take domestic flights and buses using travel permission codes issued through a state-run COVID-19 tracking mobile application. Last week, Turkish Airlines announced it would restart domestic flights on June 4 and international flights on June 10.

Yilmaz said the reopening of travel routes should be coupled with increased testing, saying at least 50,000 tests should be conducted daily in Turkey, up from about 20,000 per day over the holiday, to monitor changes in infection rates as citizens hit the road.

“The World Health Organization warned the first wave of the virus is not over yet and we have to note the virus has no vaccine, no cure and there’s no herd immunity,” Yilmaz told Al-Monitor. “These measures to ease restrictions are an early intervention that should not be applied.”

He underlined his concerns by noting Turkish medical workers continue to contract the virus on the job, with two doctors dying from coronavirus complications in the last week. According to TTB data, more than 8,500 Turkish health workers have been infected by COVID-19, and 35 died as a result of the virus since March.

Still, many Turks remain eager to resume daily life and work routines, as state officials seek to avert long-term economic impacts from the pandemic. While the Turkish economy, with $169 billion in foreign debts due in the next year and low Central Bank reserves, is particularly vulnerable to a prolonged disruption, some researchers say a mishandled response may increase economic damage over the long term.

Selva Demiralp, an economics professor at Koc University and director of the Koc University-TUSIAD Economic Research Forum, published research Tuesday in which she stated that ineffective measures could extend the lockdown period for another year, and in turn might increase the economic costs of COVID-19 to about 10% of Turkey’s gross domestic product.

“Contrary to the popular belief that less restrictive approaches would be more economical, we found that demand patterns will not return to normal so long as the number of infections remains elevated,” Demiralp wrote on the Middle East Institute website.