As demand and manufacturing output dip during the novel coronavirus crisis in Turkey, analysts warn inflation may rise in the coming months. 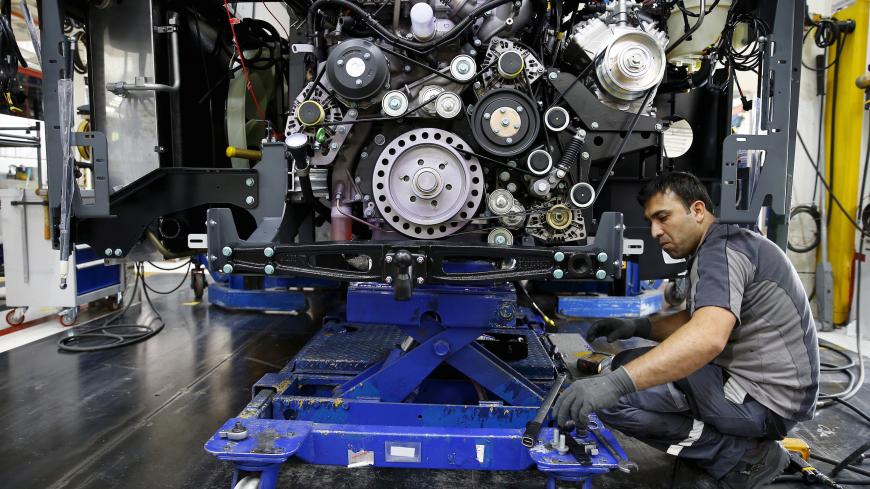 An employee works at the assembly line of the MAN Bus Production Center in Ankara, Turkey, July 29, 2015. - REUTERS/Umit Bektas

ISTANBUL — The coronavirus pandemic continues to take a heavy toll on global economies and Turkey is no exception. To date, the nation has recorded 127,659 confirmed cases of COVID-19 and 3,461 virus-linked deaths. Turkish leaders continue working to stem the spread of the disease with mixed success, as its domestic economic impacts materialize in the latest financial data.

A gauge on manufacturing output in April fell to its lowest point since the 2008 financial crisis, posing employment challenges for the sector, according to a report published Monday by Istanbul Chamber of Industry and IHS Markit.

The Purchasing Managers Index, a composite figure of manufacturing performance, dropped from 48.1 in March to 33.4 last month as a devalued Turkish lira increased input costs for companies, with repercussions for new orders and staffing.

The news comes after Turkey’s Central Bank lowered its 2020 inflation forecast Thursday to 7.4%, down from 8.2% in January, though April figures released today indicate inflation slowed slightly less than expected. While Turkish regulators have highlighted a record slump in oil prices as a key deflationary trend, rising food prices put upward pressure on overall inflation in the country.

The mixed developments will continue to pose challenges for the Turkish economy as the nation grapples with the impacts of the pandemic, though economic analysts warn current trends may reverse in the coming months due to weak demand and continued strain on the labor market.

Atilla Yesilada, a political analyst at Global Source Partners, said he expected the effects of lowered production capacity as result of the pandemic to begin materializing this summer.

Consumer prices rose 10.94% year-on-year in April, according to the Turkish Statistical Institute, while Turkey’s trade deficit widened 13.4% to $3.4 billion over the same period.

While the Central Bank lowered its inflation forecast amid such trends, Selva Demiralp, a professor of economics at Koc University and director of the Koc University-TUSIAD Economic Research Forum, has repeatedly drawn attention to regulators’ limited resources in curtailing future economic shocks, particularly as diminished bank reserves continue to be used to bolster the Turkish lira, which recently passed the psychological marker of seven per dollar.

“In the short run, the downfall in demand and the fall in oil prices may dominate the upwards pressures coming from the exchange rate,” Demiralp wrote in the Yetkin Report. “In the medium to long run however, I am afraid that the upside risks to the long-term inflation outlook are underestimated.”

As many nations face recession amid the coronavirus pandemic, the economic impacts may be felt acutely in Turkey, where a survey by Metropoll found 24% of respondents could not meet their basic needs, such as food and shelter, in April. In the same survey, slightly less than half of respondents said they able to meet basic needs, but nothing more.

Impacts on the labor market remain to be seen, but some analysts are estimating unemployment rates may have hit 20% at the end of April, with further increases expected due to lost income from the summer tourism season in Turkey.

Data compiled by Erol Taymaz, an economy professor at the Middle East Technical University in Ankara, suggested non-agricultural labor demand in Turkey could decline by 19%-29% as a result of the pandemic, putting 4.2-6.5 million people out of work in Turkey.

Noting the difficult times ahead, Turkish President Recep Tayyip Erdogan announced Monday evening that some coronavirus restrictions would be eased. A ban on intercity travel will be lifted in seven provinces and curfews imposed on senior citizens and people under 20 years of age will be eased.

In addition, shopping malls, barber shops and some stores will reopen May 11, while universities will resume courses June 15. The easing comes after four consecutive weekend lockdowns on major urban areas, among other measures, which have reportedly decreased the number of new infections, with Turkish health officials recording a steady decrease in virus-linked deaths over the last week.

The improvements have also caused lawmakers to lift a ban on medical exports over the weekend as Turkey continues to send supplies to countries around the world. Still, health experts warn against lifting precautions too swiftly, with the Istanbul Medical Chamber saying in a Monday statement that the pandemic remains a serious threat.

In the meantime, economic analysts will continue to watch volatility in the Turkish lira as the Central Bank seeks to open swap lines with foreign institutions including the US Federal Reserve. The Turkish authorities have maintained they will not seek support from the International Monetary Fund.

Still, Yesilada said a further devaluation of Turkey’s currency could have extensive repercussions on Turkey’s economy, as companies lacking sufficient cash flows would become more reliant on foreign-denominated loans, which in turn would become more costly to pay off if the lira were to continue its decline.

“This week is extremely critical,” Yesilada told Al-Monitor. “As I watch my screens, there’s this bloody battle between foreign traders and Turkish traders over the exchange rate. I don’t know who’s going to win, but if Turkey loses, then the exchange rate will fly off the handle.”

by Murielle KASPRZAK and Joseph SCHMID | AFP | May 26, 2022
END_OF_DOCUMENT_TOKEN_TO_BE_REPLACED