As Turkey gets back to business, doctors warn second wave could follow

Cafes and restaurants reopened and intercity travel resumed in Turkey after new cases of the novel coronavirus have steadily declined, though health officials warn failure to follow social distancing measures could lead to new infections. 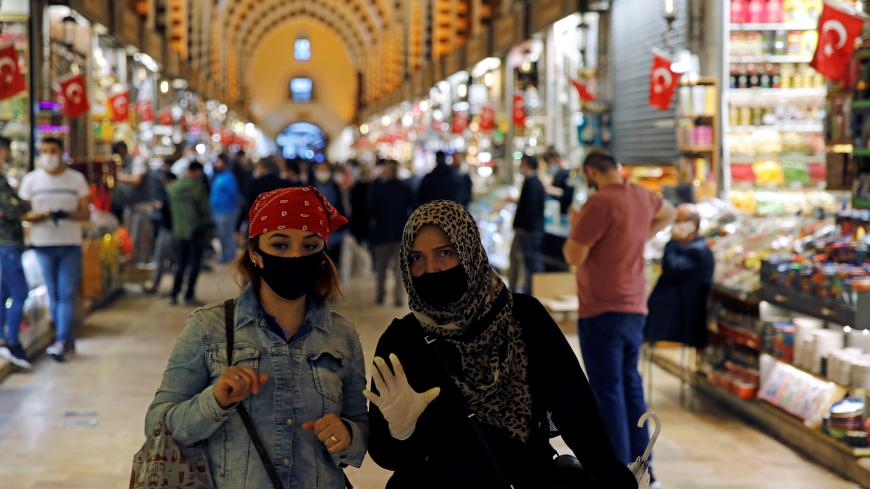 Women wearing protective face masks walk at the spice market, also known as the Egyptian Bazaar, as it reopens after weeks of the close doors amid the spread of the novel coronavirus in Istanbul, Turkey, June 1, 2020. - REUTERS/Umit Bektas

ISTANBUL — In Istanbul’s central Beyoglu district, residents could be seen enjoying meals in restaurants and drinks at local bars this week for the first time since venues were ordered shut in March under measures to stem the spread of the novel coronavirus.

On Monday, cafes and shops reopened and a ban on intercity travel was lifted as new COVID-19 cases have fallen steadily in recent weeks, prompting state officials to ease restrictions in to attempt to resume some sense of normalcy. Turkey dropped to 11th in worldwide case numbers and 17th in recorded deaths, according to data from John Hopkins University, as ongoing curfews on senior citizens and citizens under 20 years of age appear to be proving effective.

Yet amid the positive developments, health officials warn a second wave of infections could emerge if social distancing measures are not followed.

“The period ahead is important,” Turkish Health Minister Fahrettin Koca tweeted Tuesday. “Let’s not forget that risks remain. Our daily case numbers remain around 1,000. The outbreak is not over yet.”

Koca went on to say what COVID-19 patients experience in intensive care “is strange to you like Chinese,” to which he added an image of Chinese characters reading: “If we do not heed precautions, we will be back at square one.”

The unusual tweet underlined the looming threat posed by the pandemic as residents and business owners have grown restless from restrictions and state officials seek to avert a prolonged economic slowdown. Turkey’s consumer inflation rose more than expected to 11.4% in May, mostly driven by increases in food and energy costs, ending two months of decline.

Following the announcement of the inflation data Wednesday, the Turkish lira fell slightly against the US dollar to 6.73, but the currency has remained largely stable after earlier shocks amid the pandemic. Speaking to state broadcaster TRT Haber Wednesday, Turkish Trade Minister Ruhsar Pekcan said Turkey remains in swap deal talks to bolster reserves through arrangements with several countries including India, Japan, Malaysia and South Korea.

State officials now hope easing restrictions will reboot the economy after intercity road and air travel restrictions were lifted Monday, with nearly two million people traveling between provinces so far this week and many bound to holiday destinations along the country’s Aegean and Mediterranean coasts.

Yet the renewed mobility and reopening of mass gathering areas, such as Istanbul’s Grand Bazaar shopping center, have drawn concern from scientists tracking the pandemic. Emrah Altindis, an assistant biology professor at Boston College, said scaling back social distancing measures could lead to increased infections in the coming weeks.

“There is the possibility we will see what we now see in Iran, which is a second peak in the first wave [of the coronavirus],” Altindis told Al-Monitor. He noted that a lack of transparency regarding pandemic data in Turkey adds uncertainty to the lingering threat posed by COVID-19, saying there is no publicly available information on the age distribution of virus-linked deaths in Turkey.

In addition, Altindis said the reproduction number of new cases, or R0, remains unavailable for individual districts and has been publicized to date strictly as a national average, leaving epidemiologists with few tools to track and verify urban contagion rates.

Altindis also questioned current testing protocols in which tests are mainly conducted on patients showing COVID-19 symptoms. He said tests must be administered more broadly to include apparently healthy individuals and help isolate asymptomatic carriers before they spread the virus unintentionally.

Dr. Tevfik Ozlu, a board member of the Turkish Health Ministry’s Science Council, recently tested 50,000 seemingly healthy individuals in Gebze, a city just east of Istanbul, and found a rate of 0.35% positive tests. Though Ozlu said the results showed the rate of asymptomatic infection was lower than expected, Altindis said the data was cause for concern if similar infection rates were present nationwide.

“If these numbers are true for all of Turkey, it means there are 300,000 people right now who are carrying the virus and transmitting it,” Altindis told Al-Monitor.

As of Wednesday, Turkish health officials have recorded 166,422 coronavirus cases and 4,609 virus-linked deaths in the country.

Weekend and holiday curfews have been in place for major Turkish cities since March 11 to stem the spread of the virus, but no such restriction has been announced for the upcoming weekend. Barring a late announcement, many urban Turks might enjoy their first weekend outdoors in months.

Curfews remain for citizens aged 65 and over, as well as most people under 20 years of age. But in reflecting on the Turkish state’s coronavirus response, Altindis said strict precautions on vulnerable populations were likely one of the nation’s most successful measures.

“I know that it is extremely difficult for these people … but I think this decision saved a lot of lives,” Altindis told Al-Monitor.