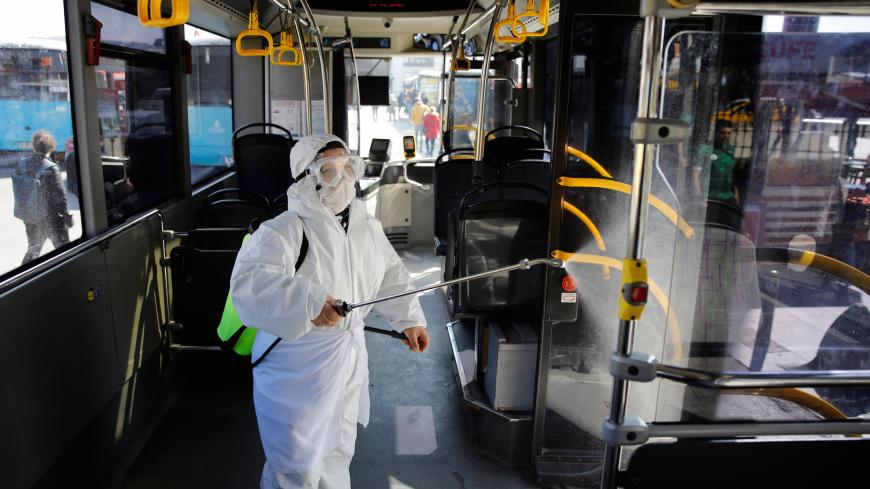 A worker in a protective suit disinfects a bus due to coronavirus concerns in Istanbul, Turkey March 11, 2020. - REUTERS/Umit Bektas

ISTANBUL — Turkish health officials announced the first recorded case of coronavirus disease (COVID-19) in Turkey during a late night press briefing Tuesday. Speaking in Ankara, Turkish Health Minister Fahrettin Koca said a male patient tested positive for the virus after traveling to Europe and that people with whom he came in contact had been placed in quarantine.

“The coronavirus is not stronger than the measures we will take,” Koca said in effort to reassure the public. “A quarantined patient cannot threaten society.”

Citing patient privacy policies, Koca did not share the patient’s whereabouts or further details about the case. Up until the announcement, Turkey had remained free of confirmed cases as the disease spread in neighboring states.

According to the World Health Organization, five other countries reported their first cases of COVID-19 in the last 36 hours, including Brunei, Mongolia, Cyprus, Guernsey and Panama. At the time of reporting, WHO estimates at least 4,012 deaths have been linked to the disease worldwide, with 113,702 confirmed cases reported since the first diagnosis in December.

Erdogan said new preventative measures would be taken including the use of thermal cameras in public spaces as train service was canceled Wednesday between Istanbul and the Bulgarian capital of Sofia. Though the WHO praised the proactive steps as “vigilant, cautious,” Turkish medical experts have called for increased public testing and greater transparency.

Dr. Ozlem Azap, an infectious disease researcher at Baskent University in Ankara, said details of Turkey’s first case had yet to be shared with experts in her field.

“We don’t have enough information about this case,” Azap told Al-Monitor. “As an infectious disease specialist, I should know which city or hospital he is in because we have a network of specialists and we should be able to inform each other of developments.”

Noting that Turkey is among the last countries in the region to confirm a COVID-19 case, Azap said Turkish health officials would need to increase screening.

Turkey’s already fragile economy will be tested by the virus. Though the Turkish lira remained relatively stable following the initial Health Ministry announcement, the Istanbul Stock Exchange was volatile Wednesday, with Turkish medicinal companies and grocery chains seeing a surge in investments and shares for Turkish sports clubs collapsed on grim prospects for ticket sales.

Particular concern has been raised by the Association of Turkish Travel Agencies, which is seeking government support to keep tourism-dependent businesses afloat as contagion fears have led to a slew of cancellations in the hotel and travel industries. The association’s advisory board predicts the epidemic will decrease the number of foreign tourists to Turkey by 3-4% in 2020 and could have broader impacts as the tourism sector accounts for about 13% of the nation’s economy.

Culture and Tourism Minister Nuri Ersoy went a step further during a press conference Wednesday afternoon, suggesting state officials may seek to discourage foreign tourists until the end of April.

The news comes after repeated warnings from public health officials that there was a high probability of undiscovered cases in Turkey. In an earlier incident, a Maryland resident was diagnosed with the virus upon reentering the United States after a flight transfer in the new Istanbul airport.

On March 9, Maryland Governor Larry Hogan announced the patient had contracted the virus in Turkey, but the Turkish Embassy quickly refuted the claim via Twitter, stating the 86-year-old traveler had been in Albania and merely changed planes in Turkey. Meanwhile, the first death of a Turkish citizen from the virus was recorded in France on March 6.

The rapid spread of the coronavirus prompted the Turkish state to take various precautions, including the screening of passengers arriving from aboard and halting all passenger flights to and from Italy, China, South Korea, Iran and Iraq. Land border crossings with Iran were closed in late February.

In addition, Koca has called on Turkish citizens to avoid unnecessary travel abroad and to self-quarantine for 14 days upon return. The Health Ministry’s Directorate General of Health for Border and Coastal Areas issued a circular stating its personnel's annual leave was cancelled until further notice.

In line with universities and schools in other impacted countries, a growing number of education institutions are responding by moving to online course formats. Some schools, including Istanbul’s Bogazici and Kadir Has Universities, are taking greater precautions by moving their spring holidays from April to March.

On social media, a different set of measures are being imposed. Istanbul's top prosecutor opened legal proceedings and investigations into 29 social media users who allegedly shared posts with the aim of “causing worry” among the public and “inciting fear and panic.” The accounts were accused of casting doubt on whether state authorities are taking “adequate precautions against COVID-19.”

Recent news reports have highlighted concern for the potential spread of the virus in Turkish prisons as well as refugee camps near the borders. Azap said state measures to quarantine people arriving via land borders have been helpful, but conditions in holding areas would need to improve to reduce the spread of communicable diseases.

“Forty-eight people were put in a small facility, with access to one toilet for 14 days,” Azap told Al-Monitor, describing one episode on the Turkish-Iranian border. “More attention should be given to people being held at borders, for both their physical and their mental health.”