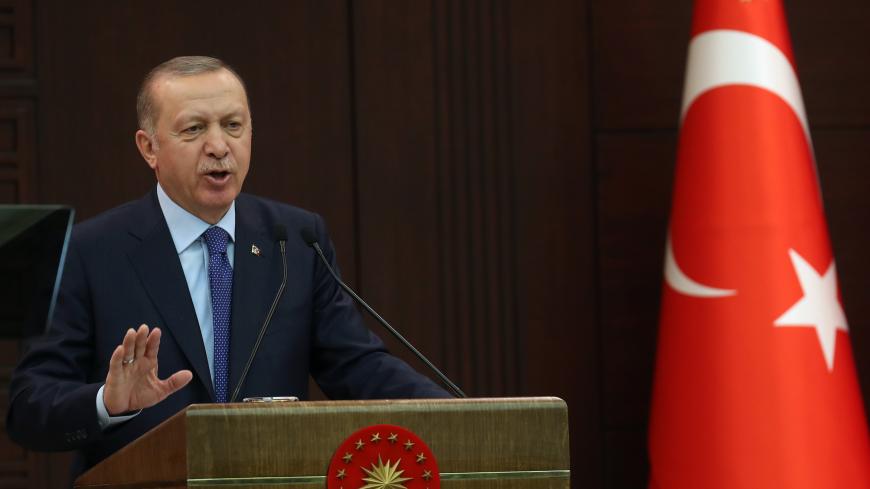 Turkish President Recep Tayyip Erdogan speaks during a press conference held after the coordination meeting to fight against the novel coronavirus at the Cankaya Palace in Ankara, Turkey, March 18, 2020. - ADEM ALTAN/AFP via Getty Images

ISTANBUL — In President Recep Tayyip Erdogan’s first major address regarding the spread of the coronavirus, the Turkish leader unveiled a number of measures designed bolster the nation’s economy one week after the first domestic Covid-19 case was confirmed.

“No virus is stronger than Turkey,” Erdogan told an audience in Ankara following a meeting with high-level officials to coordinate a national response to the global pandemic.

Introducing an economic stimulus package worth 100 billion liras ($15.4 billion), Erdogan said national insurance payments in 11 sectors would be suspended for six months, while credit payments for impacted companies would be frozen for three months. Other measures lowered the VAT on domestic air travel from 18% to 1%, suspended a hotel accommodation tax until November and increased minimum pension payments.

The Turkish leader also advised citizens to practice social distancing and stay at home if possible, without announcing additional measures to restrict movement. Prior to the speech, Erdogan had said the pandemic could become an opportunity for Turkish manufacturers as global companies seek to shift production away from China.

"If we can manage this one- or two-week process well in our country and curb the spread of the disease, we will have a good picture before us,” Erdogan said.

The news comes after Turkish Health Minister Fahrettin Koca announced late Tuesday night that the number of confirmed Covid-19 cases had risen to 98 in Turkey, up from 47 cases Monday, and the country had recorded its first virus-related death.

As of Wednesday, the World Health Organization reported more than 193,000 confirmed cases globally, and a total of 7,864 recorded deaths linked to the virus. Though WHO data shows the number of new cases appears to be decreasing in China, a surge in new infections is being reported in Europe and the eastern Mediterranean region, where governments are moving to contain the spread.

Dr. Bulent Nazim Yilmaz, secretary general of the Turkish Medical Association (TTB), said state health officials are responding to the pandemic by increasing testing locations to all of Turkey’s 81 districts, up from 25 initial screening sites. On Wednesday, Yilmaz said Turkish medical personnel had conducted more than 4,000 tests and that his association was pushing to expand national screening capacities.

“Without diagnoses, it’s hard to protect people,” Yilmaz told Al-Monitor, adding the TTB is not yet being updated on the daily number nor location of tests being conducted in Turkey.

In line with international practices, Yilmaz said Turkish medical personnel are strictly testing individuals showing Covid-19 symptoms, which include a persistent fever in the incubation period, coughing and respiratory problems. Screening is also being made available for people that have traveled to countries were the virus is widespread or who have come into contact with a confirmed coronavirus patient.

Yilmaz said that reducing strain on the Turkish health care system would be essential in containing the virus in the weeks to come.

“The TTB does not think a total lockdown would stop this virus from spreading,” Yilmaz told Al-Monitor. “The main concern should be preventing any kind of rush into hospitals that would overburden institutional capacities.”

Yilmaz said routine medical visits should be conducted with family doctors in order to free up hospital emergency rooms for patients with critical conditions. He added he was particularly concerned with the lack of safeguards against the virus in the Turkish prison system, where it could easily spread, and recommended defendants in pretrial detention be released or placed under house arrest.

“The TTB shared these concerns with the Health Ministry and we received a lot of criticism, but we don’t think this [crisis] should be used to pursue a populist agenda,” Yilmaz told Al-Monitor.

Amid government measures that have encouraged social distancing and restricted international flights, Turkey’s central bank moved to cut the one-week repo rate by 100 basis points Tuesday, announcing various actions to blunt the economic impact of the pandemic, which continues to rile global stock markets. As in other emerging economies, Turkey’s lira fell sharply in recent days, approaching lows against the dollar in August 2018, a period that preceded a recession that year.

At the same time, about 2,800 Turkish citizens left nine European countries and returned to Turkey, Turkish Vice President Fuat Oktay announced Wednesday. The individuals will be housed in dormitories during a 14-day quarantine period. They join thousands of pilgrims who have also been placed in quarantine after returning to Turkey from Saudi Arabia Sunday.

While speaking Wednesday, Erdogan also noted that misinformation regarding Covid-19 has been spreading through social media. As of Tuesday, Turkish authorities detained 19 of 93 individuals they accuse of making “unfounded and provocative” social media posts.

Rights organizations such as Freedom House and the International Press Institute have warned that government attempts to achieve greater control over the dissemination of information and citizens’ movements in response to the pandemic may lead to long-term policies that infringe on basic human rights.