Ankara cracks down on efforts by medical groups, opposition to address pandemic

Complaining of a lack of transparency, the Turkish Medical Association began publishing its own figures tracking the virus' spread Tuesday to the displeasure of the government, which has also halted donation drives initiated by opposition mayors. 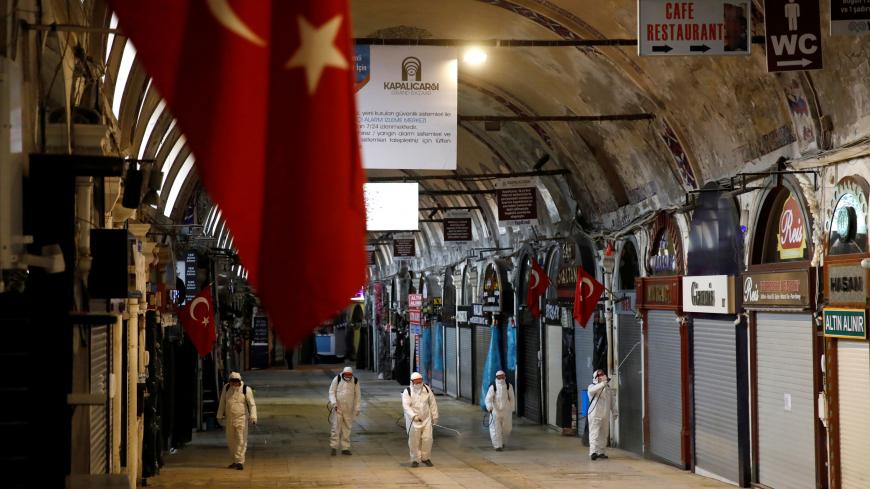 Workers in protective suits spray disinfectant in the Grand Bazaar to prevent the spread of the novel coronavirus, Istanbul, Turkey, March 25, 2020. - REUTERS/Umit Bektas

ISTANBUL — As countries around the world try to limit the spread of the novel coronavirus, medical groups and opposition figures in Turkey are finding the limits of their operating space as Ankara works on a centralized national response.

Health professionals told Al-Monitor that conflicting interests between state and local actors may put additional strain on efforts to contain COVID-19 in Turkey, where 13,531 cases have been recorded and 214 patients have died as of Tuesday evening.

To date, the Turkish Health Ministry has been releasing coronavirus statistics via Twitter and, more recently, a coronavirus information website, but the figures lack transparency, according to Dr. Bulent Nazim Yilmaz, secretary general of the Turkish Medical Association (TTB), who has repeatedly called on Ankara to publish patients’ location data to help track the pandemic.

Frustrated by the lack of response, the TTB began releasing its own figures charting COVID-19’s regional impacts on Twitter Monday evening, publicizing credible, city-specific coronavirus data for the first time in Turkey. One of a string of tweets reported more than 2,000 patients were being monitored in Istanbul, while another stated the Aegean city of Izmir had about 700 coronavirus patients.

“Citizens need to know what’s happening in their neighborhoods to understand the gravity of the situation,” Yilmaz told Al-Monitor.

TTB district offices collected the figures by calling local hospitals and health officials, Yilmaz said, adding that he plans to publish more comprehensive information on a public website in the near future. Yet hours after the TTB tweeted the data, the association’s Van and Mardin chairs were summoned to their local police precincts to make statements regarding information they may have shared.

“It is not a crime to share information with our society,” Yilmaz told Al-Monitor. “We see this as the responsibility and duty of our organization, and the Ministry of Justice always has the option of correcting our data or maybe even benefitting from it.”

Oya Ozarslan, Turkey chair of Transparency International, has publicly criticized the lack of available coronavirus data in Turkey in recent weeks, pointing to efforts by the South Korean government to inform citizens of localized outbreaks.

“They want to show they are in control,” Ozarslan told Al-Monitor. “But if you don’t know you’ve been in a high-risk area, then you might be going around spreading the virus and posing a risk to other people.”

Ozarslan said Ankara health officials might be withholding location-specific health data to prevent citizens from fleeing high-risk areas en masse and accelerating the spread of the virus. She noted such measures are no longer applicable as the state has applied nationwide travel restrictions, requiring citizens to obtain government-issued permits for domestic travel.

“This lack of transparency leads to erosion of trust,” Ozarslan told Al-Monitor. Open information, she said, is “another way of protecting and educating society and making sure they are also participating in this fight against the pandemic.”

Turkey’s coronavirus response hit another friction point Tuesday, when the Interior Ministry issued a circular banning coronavirus donation drives such as those initiated by opposition mayors in Ankara and Istanbul.

Istanbul Mayor Ekrem Imamoglu and Ankara Mayor Mansur Yavas, both of the main opposition Republican People’s Party, established fundraisers to help individuals and families affected by the coronavirus and its economic impacts.

The drives were halted Tuesday after Turkish President Recep Tayyip Erdogan announced he would launch a nationwide fundraiser Monday evening to support citizens in need amid the pandemic. Erdogan launched his “National Solidarity Campaign” by saying he would donate seven months of his own salary. Other members of parliament followed the president’s lead by reportedly donating a total of $791,000 to the effort.

Berk Esen, assistant professor in International Relations at Ankara’s Bilkent University, said he does not expect the national fundraiser to be popular and that it is likely designed to meet specific political goals.

“The central government may be trying to steal the spotlight from [opposition] mayors, but this has always been the AKP’s strategy,” Esen told Al-Monitor, using the acronym for Erdogan’s Justice and Development Party. “This is also an Islamist-populist party, and as part of their agenda, they very much depend on charity culture.”

Esen said Erdogan was likely looking to mobilize his base to help serve less fortunate citizens with the aim of controlling resource collection and distribution throughout the pandemic.