Turkey’s health minister acknowledged Wednesday that state records do not reflect the full number of COVID-19 cases in the country, drawing fire from medical groups that have long claimed infection rates were underreported. 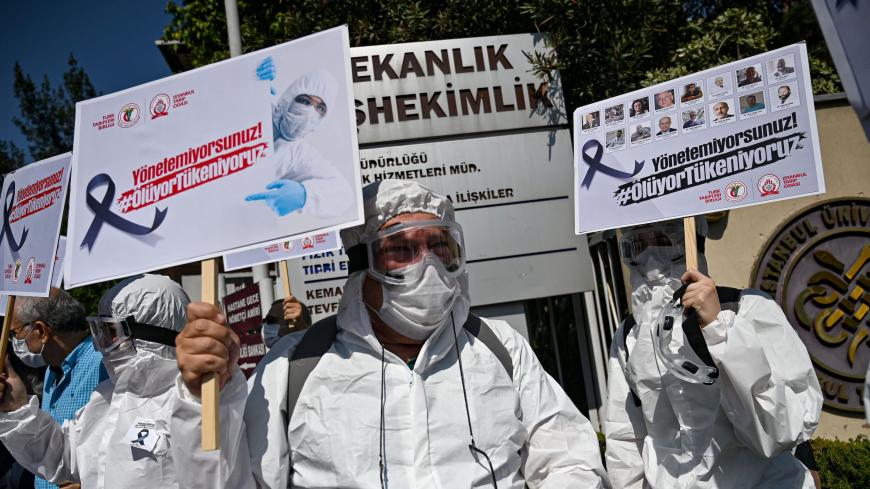 Health workers wearing personal protective equipment hold placards reading "You cannot manage, we are dying - We are running out" during a demonstration against the goverment's health policy on Sept. 15, 2020, in front of Istanbul University's medical school. - OZAN KOSE/AFP via Getty Images

ISTANBUL — Speaking at a weekly press briefing Wednesday, Turkish Health Minister Fahrettin Koca acknowledged that data published by the state is only a partial record of confirmed COVID-19 cases, sparking a backlash from citizens and medical groups who have criticized the government’s lack of transparency throughout the pandemic.

Koca said reported cases were limited to patients with symptoms being cared for in hospitals or elsewhere, and excluded asymptomatic individuals who tested positive for the virus.

“Not all cases are patients because there are those who show no symptoms at all even though their tests come back positive.” Koca said Wednesday. “These make up the vast majority [of cases].”

The statements come after Murat Emir, a lawmaker with Turkey’s main opposition Republican People's Party, said he obtained data Wednesday showing the number of new infections were nearly 20 times those reported by the Health Ministry on a single day last month. Sharing a document alleged to be from the ministry’s Laboratory Information Management System, Emir said 29,377 new COVID-19 cases had been confirmed on Sept. 10, but government data showed just 1,512 cases were reported that day.

"If this document is correct, now it's time to disclose the truth to our people,” Emir said while addressing Koca.

Emir told Bloomberg News, the document included test data from 270 centers in Turkey and showed that Istanbul alone had logged more than 3,000 new cases on Sept. 10, double the publicly reported figure for the country.

In late July, the Health Ministry changed the language used for reporting daily COVID-19 infections on its website, replacing “number of cases” with “number of patients.” Some medical professionals said the change is part of the reason behind the suspected underreporting of virus cases, which seemed at odds with figures tallied by doctors in major cities.

“From the beginning, we said these numbers were not correct and today we understand this was the case all along,” Dr. Vedat Bulut, a member of the executive committee for the Turkish Medical Association (TTB), told Al-Monitor. “From now on, all Health Ministry numbers should be multiplied by 20” to get an accurate count.

Dr. Sinan Adiyaman, who recently stepped down as TTB chair, called on Koca to resign following his statements Wednesday and the hashtag #vaksayisikac or "What is the number of cases?" trended on Twitter in Turkey Thursday.

In response to the criticism, Koca questioned the authenticity of the document presented by Emir: “The document bears no date on it and our system does not have such an interface,” Koca said. “According to the document, on this particular day, 152,000 tests were carried out, but in fact 112,000 tests were conducted.”

Koca also tweeted on Thursday, “Our state protects our citizens’ health as well as our national interests,” leading some observers to speculate whether COVID-19 numbers had been suppressed to safeguard the Turkish economy, including the tourism sector.

Throughout the summer, Turkey remained one of few countries tourists could visit without quarantine requirements. According to state data, 9.3 million tourists visited Turkey from January through August, including US citizens, who face travel restrictions in all but a handful of countries.

Medical experts expect COVID-19 infections to rise again through the fall, with some expressing concerns the pandemic coupled with influenza season may strain Turkish health facilities. Bulut said more than 100 Turkish health workers have died since the first case was recorded in March and nearly 40,000 health workers have tested positive, driving many to leave their positions at public hospitals over the risk as well as burnout and a lack of resources.

“In six months, 900 doctors have resigned from their jobs [at public hospitals] and went to the private health sector,” Bulut told Al-Monitor. “They are angry with the situation, exhausted and worried about their safety.”

In September, the TTB campaigned to raise awareness for medical worker burnout, leading Devlet Bahceli, chair of the Nationalist Movement Party, to call on state authorities to shut down the association.

To date, the nation’s Health Ministry has reported about 319,000 COVID-19 cases and roughly 8,200 virus-linked deaths.