A four-day curfew has Turkey locked down as health workers battle an outbreak that has now exceeded 100,000 cases. 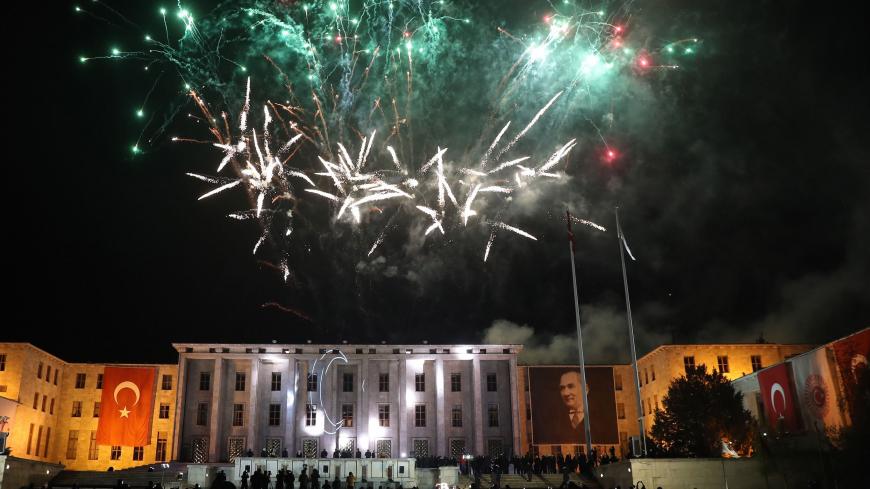 Fireworks are seen over Turkish Grand National Assembly building as part of the National Sovereignty and Children's Day, 100th anniversary of foundation of Turkish parliament, on April 23, 2020 in Ankara,Turkey, during the national lockdown aimed at curbing the spread of the COVID-19 disease, caused by the novel coronavirus. - ADEM ALTAN/AFP via Getty Images

ISTANBUL — Most Turks marked a national holiday under a full lockdown today as the country fights to contain one of the world’s fastest-spreading outbreaks of the novel coronavirus that has infected more than 100,000 people.

The country’s death toll from COVID-19 reached 2,491 after 115 people died in the last 24 hours, according to a tweet from Health Minister Fahrettin Koca. Another 3,116 people were diagnosed with the virus, bringing the total cases to 101,790. The number of daily deaths in Turkey has been declining each day since Saturday.

Recent figures suggest the rate of transmission appeared to be leveling off in Turkey, the World Health Organization said today, crediting mitigation measures taken by the government. “We are cautiously optimistic that the case numbers are stabilizing in Turkey,” Catherine Smallwood, a senior WHO emergency officer was quoted as saying by the BBC’s Turkish website.

The government has opted for rolling lockdowns on weekends and holidays in 31 cities, covering more than three-quarters of the population, rather than order a lengthy and general stay-at-home order in an effort to keep parts of the economy running during the pandemic. A four-day curfew began today to include National Sovereignty and Children’s Day, a public holiday.

Koca has said increased testing, which has reached nearly 792,000, and early intervention were the reasons behind Turkey’s comparatively low death rate, now 2.4% of all cases, significantly below other countries with high infection rates. Germany, which has been lauded for its containment of the virus, has a death rate of 3.4%.

Even amid signs the outbreak is steadying, Turkey now has the seventh most cases of COVID-19 in the world and the most in the Middle East, surpassing Iran, one of the countries hit hard early in the pandemic. More than 2.6 million have contracted COVID-19 worldwide since it officially emerged in China in December.

“Our data shows we have the epidemic under control,” Koca told a news conference late Wednesday. Some 1,800 patients are in intensive care and ICUs are less than 70% full, he said. Fewer than a third of the nation’s hospital beds are currently in use.

Turkish health care workers are still grappling with painful losses, with 24 professionals including 14 doctors succumbing to the disease since April 1, the Turkish Medical Association said. Another 3,474 medical professionals have been diagnosed with COVID-19.

The association warned last week a majority of patients who likely died of the disease may not be counted in the death toll because authorities are not using a WHO-recommended code for probable COVID-19 cases with a negative result on a polymerase chain reaction (PCR) test.

But Koca defended the coding choice, saying WHO only introduced the second code two weeks ago for countries that were not conducting the PCR test. He said the number of funerary burials in Istanbul has risen due to a ban on moving bodies to their home provinces during the outbreak.

Koca also dismissed as “anti-Turkey” a New York Times story this week that said a jump in the death rates in March and April suggested Turkey may be underreporting deaths from the coronavirus.

“If you trust our medical army carrying out this fight, then you know the statistics we share are reliable. If you don’t trust them, you won’t have faith in the precautions we are insisting upon. Those who shake this trust are wittingly or unwittingly endangering these precautions,” he said.

A survey by the Istanbul Economy Research showed 62% of respondents do trust the Health Ministry’s information and only 45% of Turks believe a curfew is required at this time to combat the virus.

Among the measures Turkey has taken to mitigate the outbreak was the release this month of a third of the prison population. The partial amnesty to relieve overcrowded penitentiaries did not apply to dissidents, including Kurdish politician Selahattin Demirtas, who led the opposition Peoples' Democratic Party before he was jailed in 2016 for his political speeches. His wife was quoted today as saying she feared for his life.

Demirtas, 47, has undergone surgeries for coronary and respiratory issues and also has blood pressure issues, making him especially vulnerable, Basak Demirtas told a podcast. “Even the slightest neglect carries the risk of mortality. When we consider Selahattin’s chronic ailments under these conditions, unfortunately his life is at risk,” she said.

In a sign that the government’s pressure on the opposition continues during the outbreak, today a prosecutor opened a criminal investigation into Canan Kaftancioglu, the Istanbul chair of the Republican People’s Party, over her social media posts about a questionable construction project at a luxury villa where a senior adviser to President Recep Tayyip Erdogan resides.

The fallout from the virus may be taking a toll on the government’s popularity. The Istanbul Economy Research study showed support for Erdogan’s Justice and Development Party has declined 7 percentage points from its 2018 election victory to 36%.

Today’s public holiday — the 100th anniversary of the founding of the Turkish parliament — passed with little fanfare. One event Turks were able to follow online was the flight path of a Turkish Airlines plane that flew over central Turkey, creating the crescent and star from the national flag on flight radar.

Friday is the start of the Islamic holy month of Ramadan. Traditional public festivities, such as fast-breaking iftar dinners, will not be held in 11 opposition-controlled cities due to risk of contagion, their mayors said in a statement. The Interior Ministry has already said that large iftar tents will not be erected in city squares.

Erdogan has said that Turkey may begin transitioning back to normal at the end of Ramadan, which concludes May 23.