The country’s health minister credits new therapies and contact tracing for a recent decline in new cases, but warns it is still too soon to loosen restrictions on mobility to mitigate the outbreak. 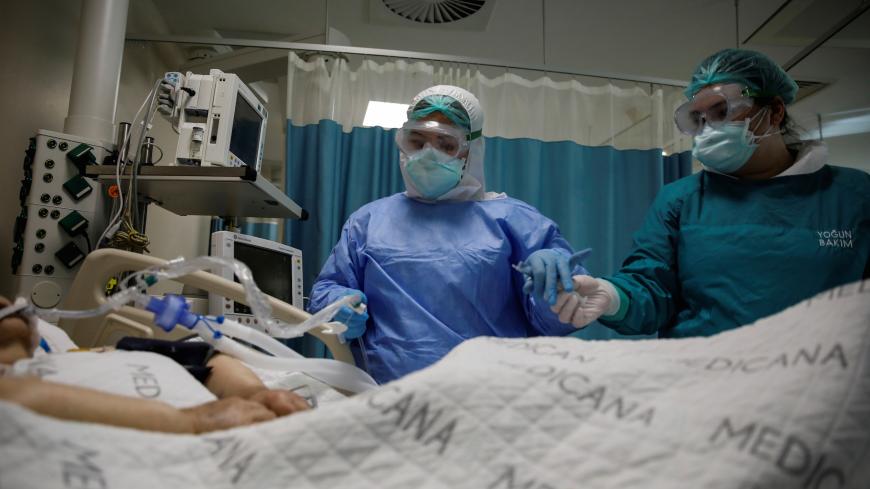 Nurses take care of a patient suffering from the coronavirus disease (COVID-19) at an intensive care unit of the Medicana International Hospital in Istanbul, Turkey, April 14, 2020. - REUTERS/Umit Bektas

ISTANBUL — Turkey’s coronavirus outbreak has reached its peak, with more than 120,000 cases, and the country is now seeing an improvement in “every indicator,” in part due to innovative drug therapies and extensive contact tracing, the health minister said

But analysts sounded a warning that the nascent improvement could prompt the government to move too quickly to ease social distancing measures and risk another spike in the contagion.

On Thursday, the Health Ministry reported 2,615 new cases of COVID-19 infection. The deaths of 93 people in the last 24 hours brought the death toll to 3,174. The number of recovered patients has reached 48,886, it said.

“I can say that we are in the peak period and have entered a downward trend. But it’s important for this to be lasting. Therefore, distancing remains extremely important,” Health Minister Fahrettin Koca said at a televised news conference late on Wednesday. “Every negative indicator is retreating and every improvement is becoming more prominent.”

Figures provided by the Health Ministry show the number of fatalities has declined every day since April 19, when it crested at 127 deaths. The daily figure for new confirmed cases has remained below 3,000 since April 25.

Yet Turkey ranks seventh in the world for confirmed coronavirus cases, which total 3.2 million worldwide since the novel virus was first reported in China at the end of December.

Koca again dismissed allegations the government is underreporting the number of deaths because it does not count patients who displayed COVID-19 symptoms but tested negative. The World Health Organization has assured him Turkey is justified in not using its code for probable false negative results on diagnostic tests, he said.

Among the factors behind the improvement are Turkish doctors’ experimental uses of drug therapies, Koca said. They have found the drug hydroxychloroquine reduces symptoms and damage caused by the virus, and the government stockpiled the decades-old malaria treatment before Turkey's first case was confirmed on March 11.

Hydroxychloroquine has stirred controversy elsewhere, especially in the United States, where President Donald Trump plugged the drug despite a lack of research into its efficacy in treating COVID-19. Fears it may cause serious cardiac issues or blindness prompted US regulators to caution against its use last week.

Turkey appears to be using hydroxychloroquine outside of clinical trials. “This is a preference but one that does not appear to conform with scientific criteria. We don’t know how it’s being used, including dosage or on which patients, and this is concerning,” said Caghan Kizil, a professor of neuroscience and genetics at Dresden University in Germany, in an interview with Al-Monitor. “If this underpins what Turkey is describing as a success, they should publish their findings so the scientific community can assess the results.”

Turkish physicians have also varied the application of anti-viral drugs procured from China that Koca did not name, using such medicine early in the onset of symptoms and well before patients require intensive care. The practice seems to have reduced the rate of pneumonia to just 15% from 70%, a feat he described as “a first in the world.”

Turkey is also delaying intubation and ventilator use and is instead providing high amounts of oxygen, contributing to the lowest coronavirus death rate in Europe at 2.58%, Koca said. “We believe that if these treatments become prevalent they will reduce the loss of patients in other countries too.”

Health care professionals in Turkey, like elsewhere, have been especially impacted by the virus. Koca said 7,428 of the country’s 1.1 million health care workers have contracted COVID-19, accounting for almost 6.5% of total cases.

Koca said Turkey has identified nearly 99% of people who have come in contact with infected individuals through contact tracing, reaching more than 464,000 people. Turkey’s largest city of Istanbul remains the epicenter of the outbreak with almost 60% of confirmed cases.

Because the government does not regularly release details on the locations of cases, it is difficult to say whether the outbreak will intensify in areas outside of Istanbul in the coming period, Kizil said.

Already, health officials are warning of another wave in the autumn. Yesim Tasova, a member of Koca’s coronavirus committee, said the group expects warm and humid summer weather to curb the virus in June and July. “But this does not mean that the microorganism will disappear and won’t reemerge in the autumn, perhaps with more cases,” she told reporters, according to the state-run Anadolu Agency.

President Recep Tayyip Erdogan has said Turkey will begin returning to normal after the end of the Islamic holy month of Ramadan at the end of May. The education minister finally announced on Wednesday that children would not return to school on Monday, as had previously been stated, but that schools are scheduled to open on June 1. Before then, Turkey’s ubiquitous shopping malls are set to open parts of their facilities on May 11.

To keep the $750 billion economy afloat, Turkey has been imposing lockdowns in 31 cities only on weekends and holidays. A three-day curfew begins tomorrow to include May Day, a public holiday.

Data released by the official statistics agency on Thursday revealed the economic pain already caused by the coronavirus. The trade deficit nearly tripled to $5.39 billion in March as exports plunged by 18%. Tourism revenue fell 11% to $4.1 billion in the first quarter as visitors stayed away.

Turkey is seeking a swap line arrangement with the Federal Reserve, said David Satterfield, the US ambassador in Ankara, in an Atlantic Council webinar on Thursday. The government is searching for ways to secure foreign currency liquidity as it depletes the central bank’s reserves with fiscal stimulus and to defend the lira currency, which has lost 21% of its value against the dollar so far this year.

The government’s timeline for opening back up is based on best-case scenarios and may be too early, said Kizil. While the partial lockdowns and expanded testing, which has now exceeded one million, are positive, “these are not measures that will end the epidemic. Instead, they will slow the spread while extending the outbreak. As long as you don’t have a general quarantine, people will continue to infect others, even if it is at a slower rate.”