Turkey readies for 'new normal' after declaring success against coronavirus

President Recep Tayyip Erdogan has announced that a raft of restrictions imposed to curb the outbreak will be lifted next week as the country’s infection and death rates fall sharply. 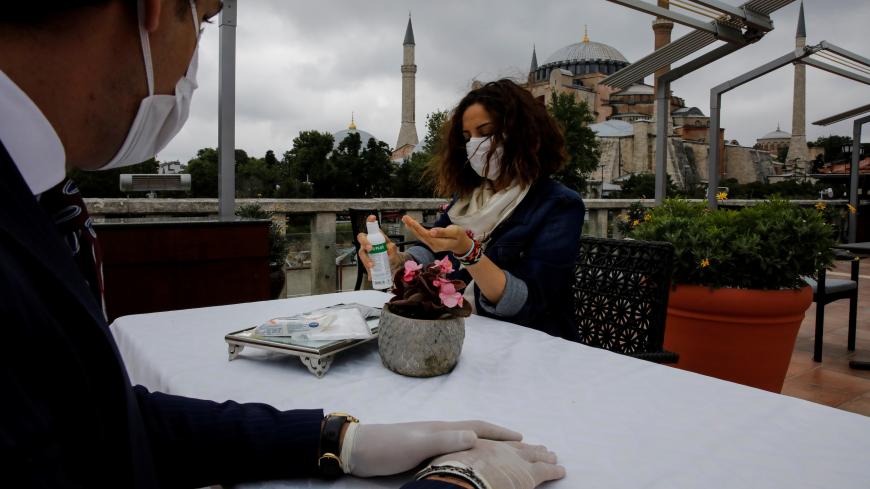 Four Seasons Sultanahmet Hotel staff members practice new service rules as they check the readiness of the hotel to the Healthy Tourism Certificate Program aims to convince travelers despite the spread of the novel coronavirus, in Istanbul, Turkey, May 21, 2020. - REUTERS/Umit Bektas

ISTANBUL – Turkey is set to scrap a series of social-distancing restrictions imposed to curb the coronavirus outbreak, allowing for domestic travel to resume and a slate of businesses to reopen next week, as the rate of new infections and deaths slow dramatically, President Recep Tayyip Erdogan said on Thursday.

The government appears keen to kickstart the economy quickly after a two-month interruption of economic activity that has hit Turkish manufacturing and all but stalled its services sector.

A total of 124,369 people have recovered out of the 160,979 people who contracted COVID-19, the disease caused by the SARS-CoV-2 virus, Health Minister Fahrettin Koca said on Twitter. On Thursday, another 1,182 people were diagnosed with the disease and 30 people died, bringing the death toll to 4,461 — far below other countries with similar caseloads.

Turkey introduced strict measures even before it became a Middle East hotspot for the coronavirus pandemic last month. But new infection rates have slowed to their lowest levels since March, soon after the virus reached Turkey, prompting a senior Erdogan adviser to tweet last week, “#MissionAccomplished.”

“We now have the opportunity to take necessary steps toward the period we call ‘the new normal,’” Erdogan said after a four-hour cabinet meeting at his Istanbul residence. “Turkey’s thwarting of the outbreak and the loss of life and its attainment of a position that makes it an example to the world is a collective success for all 83 million of us.”

The ban on intercity travel will be “completely lifted” June 1, he said, but added it could be reintroduced for some provinces if required. Preschools, daycare centers, sports facilities, restaurants, cafes, open-air concert halls, museums, beaches and national forests are also permitted to re-open next week.

Stay-at-home orders for people age 65 and up and 18 and under will continue, with exceptions made for a few hours each week, he said. Residents in 15 provinces, including Istanbul and the capital Ankara, will be under curfew again this weekend before the easing begins on Monday, according to an Interior Ministry statement.

The government had already eased some rules, allowing hairdressers and shopping malls to reopen on May 11. Friday prayers will be allowed for the first time in two months this week at more than 1,900 of the country’s mosques, and the head of religious affairs said 1,003 animals will be sacrificed to celebrate the resumption of congregational prayers.

Separately, Erdogan announced that the triumphant Sura al-Fath from the Quran will be read from Hagia Sophia on Friday, the anniversary of the 1453 conquest of Istanbul by Ottoman forces. The Istanbul monument was an Orthodox church for nearly a millennium before its conversion to a mosque following the fall of Istanbul, then became a museum in 1935 in what is widely seen as a symbol of Turkish secularism. Certain religious groups have since called for it to be reopened as a mosque.

Some experts are warning that physical distancing rules are being loosened too soon in Turkey and that allowing public gatherings could affect the decline. Caghan Kizil, a professor of medicine at Dresden University in Germany who has closely followed the outbreak in Turkey, said on Twitter that Turkey may be pursuing a kind of herd-immunity strategy unless it sees a sharp rise in new infections, when it could reintroduce restrictions.

“It wouldn’t be wrong to say that the accelerated shift to normalization after a desired but debatable success story shows decisions rest more on political preferences then scientific figures,” Kizil tweeted.

Turkey had only just returned to rapid economic growth when the pandemic threw the global economy into a tailspin. The hit to Turkey’s economy is likely to be a 3% contraction this year, Fitch Ratings said this week.

But Finance Minister Berat Albayrak, who is Erdogan’s son-in-law, insisted the economy will expand this year. “When compared with the rest of the world, Turkey is among countries least affected, from growth to unemployment to many other fields,” he said on Wednesday. Turkey will release gross domestic product figures for the first quarter on Friday that are expected to show an expansion of 4.9% before the impact of the coronavirus restrictions were largely felt, according to a Bloomberg poll.

One side effect of the outbreak has been the proliferation of conspiracy theories across social media as well as in some nationalist newspapers that minorities, especially Jews, were somehow behind the outbreak, which emerged in China at the end of 2019. A man who set fire to an Armenian church door in Istanbul earlier this month reportedly told police he was angry because he believed Armenians caused the contagion.

This week, security footage showed a man climbing the gates of another Armenian church to tear down a cross. No arrests have been made in connection with the attack, which is the third against a church in one month, Garo Paylan, an opposition lawmaker who is of Armenian descent, told a news site.

It was unclear if the latest vandalism was sparked by misplaced anger over the coronavirus. But critics have warned that politicians’ recent rhetoric targets Turkey’s small communities of non-Muslims and has made them vulnerable.

Earlier this month, Erdogan said “Armenian and Rum lobbies” were among the “evil forces” conspiring against Turkey. (Rum is a term used for the tiny population of ethnic Greeks still living in Istanbul, as well as Greek Cypriots.) He also referred to militants in the outlawed Kurdistan Workers Party as “remnants of the sword,” a pejorative for survivors of the World War I-era genocide of Armenians by Ottoman forces.

“The administration’s spokesmen themselves have used hate speech that incites polarization and discrimination,” wrote lawmaker Tuma Celik, who is a Syriac Christian, in a parliamentary question submitted on Thursday following the latest attack on a church. “We could easily see serious damage caused by hate speech and actions in Turkey’s near future.”