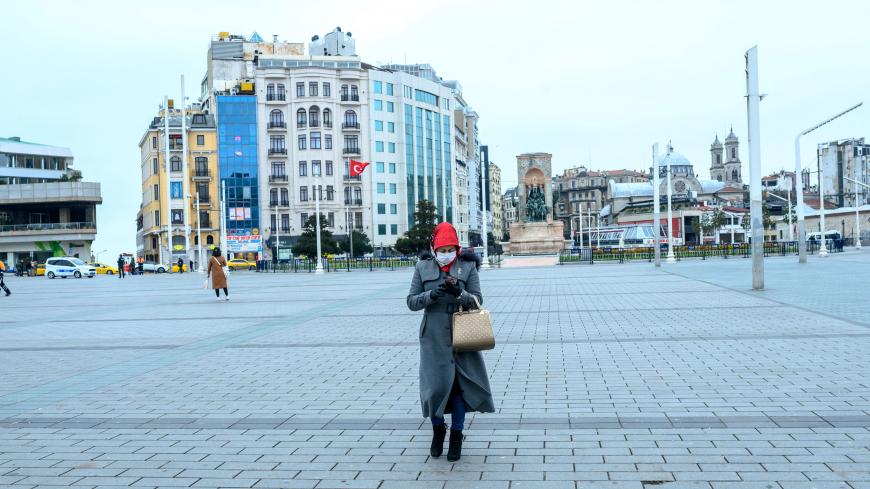 A woman walks across the iconic Taksim Square, deserted due to the coronavirus outbreak, Istanbul, Turkey, March 26, 2020. - BULENT KILIC/AFP via Getty Images

ISTANBUL — Turkey may introduce a full lockdown to stop the spread of the novel coronavirus if current measures to encourage social distancing fail to slow the outbreak that has claimed at least 59 lives, the interior minister said, while the mayor of Istanbul urged the government to declare a curfew in the country’s biggest city.

Fifteen more people died on Wednesday from COVID-19 and 2,433 have been infected in Turkey, Health Minister Fahrettin Koca said late on Wednesday. Comparative data shows Turkey’s infection rate is among the fastest in the world.

Turkey has already shut some 200,000 businesses, closed schools through the end of April and may free up to a third of the prison population to counter the spread of the virus. Unlike much of Europe, authorities have stopped short of a total shutdown in what the government’s critics say is an effort to protect a shaky economy.

“Full social isolation is always on our agenda. We can step up restrictions if we aren’t able to counter this with the current measures,” Interior Minister Suleyman Soylu told a television station when asked if a curfew was under consideration. “If we cannot get ahead of this epidemic with these measures, of course we will take the maximum measure.”

Nearly a half-million people around the world are confirmed to have contracted SARS-CoV-2 and more than 22,000 people have died since the new virus emerged in China at the end of last year. The pandemic has thrown the global economy into a tailspin and sent governments scrambling to save businesses while protecting lives.

President Recep Tayyip Erdogan said Turkey would emerge from the outbreak shortly if it maintains physical distancing. “With good isolation, we will definitely slow the rate of the spread within two to three weeks and emerge from this period in the shortest possible time with the least amount of damage,” he said in a prerecorded national address late on Wednesday. But he also warned “harsh measures” would become unavoidable if current infection-control rules aren’t observed.

Istanbul Mayor Ekrem Imamoglu, Erdogan’s outspoken rival, said the city of 16 million people already needs drastic protections. “Even if it’s not for Turkey in general, the government should work on a gradual, controlled curfew for at least Istanbul,” Imamoglu said on Twitter. “It is of the utmost importance that radical decisions be taken today to protect society’s health, the health of our health care workers and for society’s morale and psychology.

“Unfortunately, this cannot be realized with rhetoric. Of course we will pray but you cannot prepare this city and this nation for what’s to come by just praying,” Imamoglu said, in an apparent reference to the state-run Directorate of Religious Affairs' support for prayers against the coronavirus every evening from the country’s 85,000 mosques.

Other opposition politicians said the government was falling short in testing, which has been conducted on some 33,000 people to date. Germany, which also has a population of 80 million people, is checking about 120,000 people each week. High levels of testing allow policy-makers to face the scale of the outbreak, develop responses to slow it and ensure those infected are isolated.

“We need to immediately reach the goal of 20,000 tests daily. … Without sufficient testing, we absolutely cannot understand the true situation,” said Saruhan Oluc, deputy chairman of the Peoples’ Democratic Party, who shared his remarks via email.

Koca has said Turkey set a target of 15,000 tests a day. It has developed its own diagnostic tool and sold the United States a half-million test kits. The health minister said it then ordered a million more of a different type from China.

Oluc said the government's lack of transparency is affecting how seriously people are taking the public health emergency. Officials have not released data on where in Turkey cases have been detected, data on patients’ age or gender nor where diagnostic kits have been distributed. In his address, Erdogan said Turkey had a total of 8,554 cases, including patients who had recovered, but a few hours later the health minister said the total number was less than a third of that number.

Authorities are cracking down on social media users who make “provocative” posts, identifying 2,551 problematic accounts and taking action against 449, Soylu said, without elaborating. He said two groups the government lists as terrorist organizations were behind 70% of the accounts.

Turkey is restricting exports of ventilators and other equipment used in intensive care units to cover its own needs, Trade Minister Ruhsar Pekcan said on Twitter. Companies require special permission from the government to sell the equipment overseas, she said.

Imamoglu also delivered a nod to perceptions the government is avoiding a lockdown to keep the economy ticking. “When the matter is human life and society’s psychological [well-being], economic expectations should wait in line.”

On Thursday, in fact, the government held the first tender for its long-planned megaproject to build an artificial waterway from the Black Sea to the Sea of Marmara that would make half of the city into an island.

Imamoglu, who opposes the $12 billion project because of its economic and environmental impacts, called opening a tender when the country is battling an epidemic “mind-boggling."

“There are millions of people in Istanbul and Turkey who are on the brink of losing their jobs or who have no income because their workplaces have closed. Why are we spending resources on a weird project like Canal Istanbul and not on the people?” he said.