Turkey expands quarantine to towns across country to fight coronavirus 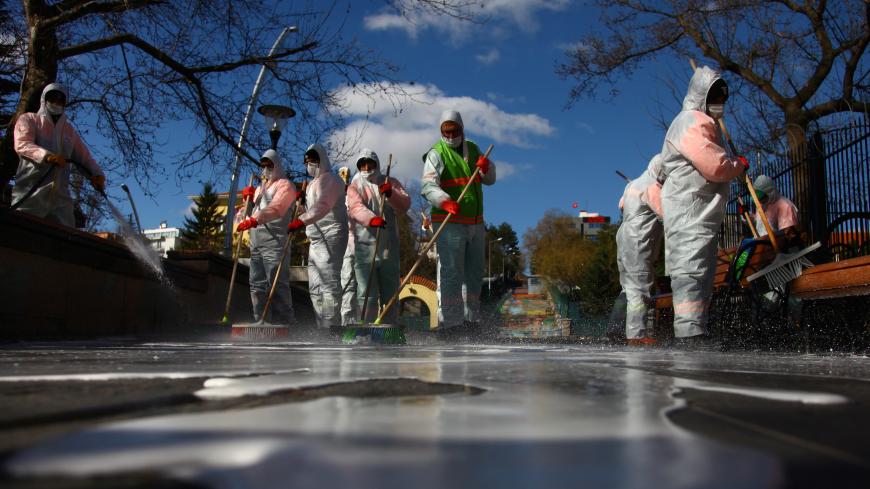 ISTANBUL — Turkey has imposed quarantines on residential areas in 18 provinces across the country as it grapples with the spread of the novel coronavirus. President Recep Tayyip Erdogan urged Turks to stay at home to bring a quick end to the outbreak that has claimed 168 lives, but also said the nation could not afford to fully halt economic activity.

Health Minister Fahrettin Koca said on Twitter today that 37 people died of COVID-19 and 1,610 people were diagnosed with the illness over the past 24 hours. The country now has 10,827 confirmed cases of the illness.

Data from Johns Hopkins University shows Turkey has one of the world’s highest infection rates, with cases doubling every two days. More than 770,000 people around the world have been diagnosed with the coronavirus since it was first reported in humans in China in December, and deaths worldwide now exceed 37,000.

Erdogan said after a Cabinet meeting he conducted by video conference that citizens not obligated to work “can keep themselves at home under voluntary quarantine,” which would make a return to life as usual “that much quicker.”

“Turkey is a nation that must continue to produce in every circumstance and condition and ensure that the wheels keep turning,” Erdogan said in comments broadcast live by TV channels.

Turkey has quarantined 41 towns, villages and neighborhoods in 18 provinces, he said. Residents are required to shelter in place and, in some areas, entries and exits are barred after residents tested positive.

To encourage residents of Istanbul to stay at home, parks and shorelines are closed to pedestrians, and special permission is required to leave the country’s biggest city. Intercity bus and ferryboat service has stopped. The country’s second-biggest airport is closed, international flights are canceled and planes are only flying to 14 cities within Turkey. Erdogan has also granted unelected governors of the 30 biggest cities with special powers to introduce new restrictions as they see fit.

But he has so far rebuffed calls to enact a stay-at-home order for Istanbul, which accounts for more than a quarter of Turkey’s gross domestic product. Policymakers are divided over whether Turkey needs a full lockdown, with public health officials advising the president to take the step but his economic team worried that the nation cannot afford to slow output further, Al-Monitor has reported.

Erdogan said he would donate seven months of his salary to a new campaign to help low-income Turks impacted by the economic slowdown, which one news site calculated was 568,750 liras ($86,500). Earlier this month, he announced $15 billion in aid, mostly in the form of tax breaks and loan guarantees; however, at just 2% of GDP, the rescue package is dwarfed by those that many Western governments have pledged to weather the pandemic. Turkey only recently emerged from a brief recession sparked by a 2018 currency shock.

“The state is not managing the crisis so much as it is trying to suppress it. The state’s capacity, despite the economic crisis, is enough for it to find the resources, if it wants to move to a full quarantine. Its preference not to raises questions about whose interests it’s protecting, whether the commercial interests of companies are what’s prioritized,” said Sinem Adar, an associate at the Center for Applied Turkey Studies at the German Institute for International and Security Affairs.

“The powers given to the governor reveal a paradox: The decision to stay off the streets resides not with the state but the citizen, but in order to retain its power over society, the state is empowering governors and bypassing municipalities,” she told Al-Monitor.

Erdogan replaced his transport minister Friday. No reason was given for the rare change to Erdogan’s Cabinet, but the outgoing minister faced criticism last week for holding a $1.2 billion tender for part of Canal Istanbul, Erdogan’s controversial pet project to build an artificial waterway between the Black Sea and the Sea of Marmara, during a time of national emergency.

Erdogan also addressed the nation's health system. “Our health infrastructure, be it personnel, medicine, equipment or the number of intensive care beds, is in good stead," he said. He added, “Compared with Europe and America, we are one of the countries closest to overcoming the spread of this disease.” Turkey is sending domestically produced health and cleaning products to Italy and Spain, among the world’s hardest hit by coronavirus.

The government conducted more than 11,000 diagnostic tests today, moving closer to a target of 15,000 tests per day. This is still far short of Germany, which has the same size population but is leading Europe in testing — averaging 71,000 per day — and aims to nearly triple this to 200,000.

Koca has explained that the government’s decision to withhold geographical information about the outbreak is to discourage Turks from fleeing hot spots and spreading the infection. Opposition parties have accused the government of a lack of transparency about where testing is conducted and cases are confirmed.

Parliament’s third-largest party will set up an “alternative” coronavirus task force to better inform the public about the emergency. Mithat Sancar, head of the Peoples’ Democratic Party, said many in the mainly Kurdish southeast were not staying at home because of distrust in the government, which had imposed curfews in the region in 2015 and 2016 to battle Kurdish militants.

Justice Minister Abdulhamit Gul extended restrictions on visits to the country’s 300,000 inmates to prevent the spread of disease, and promised to soon allow families to make video calls. Lawyers will only be allowed closed visits with their clients with prosecutors’ permission, he said. Parliament may vote this week on a bill to release as many as a third of prisoners on probation to protect crowded penitentiaries.

Prosecutors have opened investigations into 459 people to protect “society’s law, peace and interests,” including 385 people for their critical social media posts, Gul also said. Police briefly detained a truck driver whose video criticizing the government’s response to the outbreak went viral. Without government support, he could not follow the recommendation to stay at home but had to continue working, he said. “This virus won’t kill me. What will kill me is your system,” he said.