Turkey’s death toll from the COVID-19 outbreak has hit 356 as political sparring has broken out over rival assistance programs for the poor and the government’s efforts to keep the economy afloat. 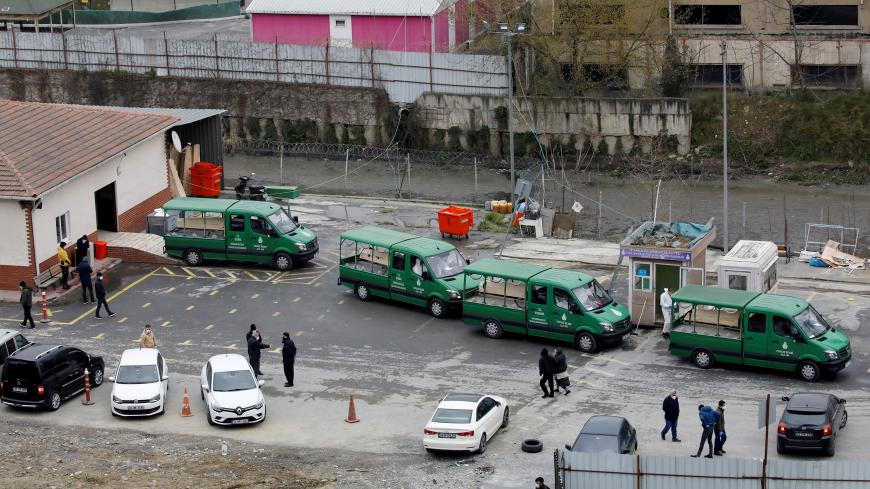 Funeral vehicles sit in front of a morgue to carry coffins of COVID-19 victims to cemeteries in Istanbul, Turkey, March 31, 2020. - REUTERS/Umit Bektas

ISTANBUL — President Recep Tayyip Erdogan said Turkey faces a “historic catastrophe” as the country suffered its deadliest day yet from the coronavirus pandemic and warned against “political profiteering” as his government spars with opposition mayors over its response to the fast-spreading outbreak.

Another 79 people died in the last 24 hours, bringing the death toll to 356 people, Health Minister Fahrettin Koca said. Another 2,456 people tested positive and the country now has 18,135 confirmed cases, he said. Testing has increased to 18,135 a day — nearly double the rate just five days ago.

The virus has infected 601 medical professionals in Turkey, Koca said on Wednesday. Cemil Tascioglu, an internist who taught at Istanbul University, became the first doctor to die after testing positive for the coronavirus on March 17, his son said in a tweet. Tascioglu, 67, was also the first medical professional to diagnose the disease in a Turkish patient. Koca said a retired medical school instructor died on Thursday. A 33-year-old nurse died last week.

Pharmacists have warned that they too are in danger, prompting the Istanbul governor to reduce their workdays by an hour. The Istanbul Chamber of Pharmacists said last week its members were falling ill as patients diagnosed with COVID-19 were “forced to visit pharmacy after pharmacy to fill their prescriptions, making our pharmacies a focal point in the spread of the epidemic.”

A Greek ferry leased by a Turkish company has been quarantined off Athens’ port of Piraeus after 120 of the 383 crew and passengers tested positive for the virus. The boat has 160 Turkish crew members on board, the Turkish ambassador to Greece told CNN Turk.

More than 980,000 people have been diagnosed with COVID-19 across the globe and some 50,000 have died since the novel coronavirus, which can cause acute respiratory distress, surfaced in China in December.

On Wednesday, Koca released for the first time the locations of cases in Turkey, showing the majority — 8,852 — were in the largest city of Istanbul, followed by 853 cases in Izmir and 712 in the capital, Ankara, as of Wednesday. The virus has now spread to all of Turkey’s 81 provinces, he said. He shared data showing one infected patient had spread the virus to 30 others.

The revelation that Istanbul was the site of 60% of the nation’s cases prompted its mayor, Ekrem Imamoglu, to repeat his plea to the government to place the city of 16 million people under a stay-at-home order. While the government has restricted movement within and without Istanbul and has urged Turks to remain at home, Erdogan has so far stopped short of a full lockdown, arguing the “wheels of production” must keep spinning to keep the economy going. Istanbul accounts for more than a quarter of Turkey's national output.

“At a time when we are living through a historic catastrophe, we are in a better place compared to many other countries, but this is not enough. We are carrying out our struggle without panicking, with smart, balanced and realistic measures,” Erdogan told mayors from his party and its nationalist partner in a videoconference that TV stations broadcast live.

Mayors of Turkey’s three biggest cities, which are all controlled by the main opposition party, were not part of the meeting. Imamoglu and Ankara’s mayor filed a lawsuit against a government order shutting down municipal fundraisers set up to help low-income residents. The ban came after Erdogan announced his own nationwide drive, and he has suggested the cities’ rival charitable efforts are a form of separatism.

Health professionals are worried the political tug-of-war between state and local officials may strain efforts to contain the contagion, Al-Monitor has reported.

On Thursday, the president issued a veiled warning against rivals' efforts to “water down” and “tarnish” the national fundraising campaign. “Our people will give the appropriate response to those who think they are outside and above the Turkish Republic state. I am saying clearly that those trying to dynamite a project that symbolizes the partnership of 83 million [citizens] is beyond negligence,” he said. “The mass conscience will not forget those engaged in political profiteering at a time like this.”

Most of the initial donations to Erdogan’s campaign came from state-owned companies and public officials. Donations have since expanded to include money from football clubs, families and Turkey’s tiny communities of religious minorities, raising 552.5 million lira ($84 million).

The central government’s request for help will stoke “suspicions the treasury is empty,” Ahmet Davutoglu, Erdogan’s former prime minister who broke with him to form a new party, told a news site. “If you cannot see that the economic crisis is burning households, we all need to worry about a social explosion.”

The government has introduced a $15 billion rescue package, mainly in the form of loan guarantees and tax breaks. Direct cash support for those impacted by a sharp economic slowdown make up a small portion of aid. But increased military expenditures during two military campaigns in Syria in the last six months and the use of international reserves to prop up the lira, hit by a currency shock in 2018, may be weighing on state finances.

Turkish exports plunged 18% in March, dragging the first-quarter figure down 4% to $42.8 billion, the Trade Ministry said Thursday, citing the economic impact of the epidemic on overseas markets. A $35 billion tourism industry won’t pick up before the Eid al-Fitr holiday, which begins on May 24, said Tourism Minister Mehmet Nuri Ersoy. Turkish Airlines extended its ban on international routes until May 1, but flights won’t return to normal until the end of June, he said. Turkey is also limiting domestic flights and has closed the country’s second-biggest airport.

International financial institutions are slashing Turkey’s growth prospects, with Bank of America becoming the latest with a forecast of a 2.3% contraction in 2020, according to Bloomberg. For now, the government is sticking to its target of 5% growth this year.