More than 30,000 people have been diagnosed with COVID-19 less than a month since it was confirmed to have reached Turkey as the government continues to resist imposing a full lockdown. 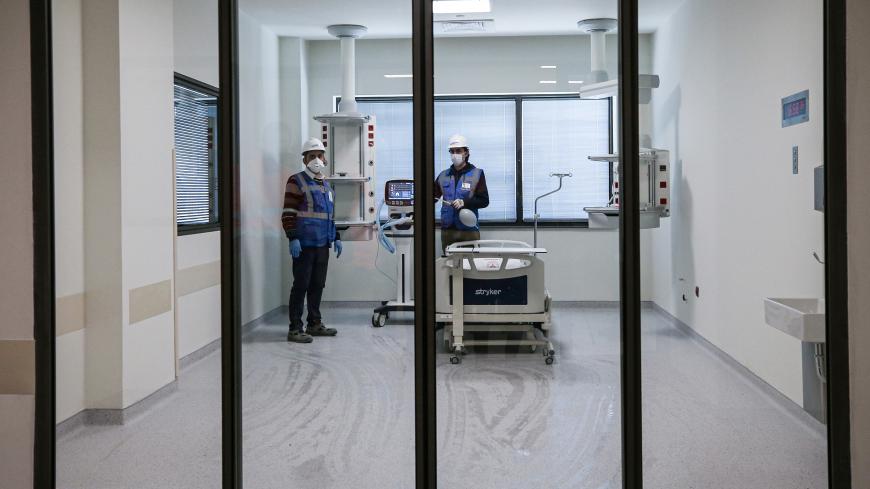 Officials check the ventilators allocated for treatment of the novel coronavirus at Basaksehir Hospital in Istanbul, Turkey, on April 4, 2020. - Elif Ozturk/Anadolu Agency via Getty Images

ISTANBUL — Turkish President Recep Tayyip Erdogan promised on Monday to expand the number of hospital beds in Istanbul, the epicenter of the country’s coronavirus outbreak, as the disease claimed another 75 lives despite tighter restrictions on residents to enforce social distancing.

The latest deaths raised the toll from COVID-19 in Turkey to 649 people, Health Minister Fahrettin Koca said on Twitter. The number of confirmed cases in the last 24 hours increased by 3,148 to 30,217, placing Turkey ninth among the nations with the highest number of cases. The world has counted 1.29 million cases and nearly 71,000 deaths since the virus emerged in China in December.

The government has gradually tightened restrictions, cancelling all international and domestic flights by Turkish carriers and quarantining a reported 128 residential areas across half of the country’s provinces. Parliament will vote this week on a bill that will free or consign to house arrest almost a third of the country’s nearly 300,000 inmates, though hundreds of jailed journalists, politicians and rights activists are excluded from the amnesty.

Yet opposition politicians and some medical professionals say the steep rise in new cases, one of the highest in the world, will continue unless the government calls for a full lockdown, like those in many European nations. Erdogan said on Monday the failure by the United States and Europe to take more decisive action to contain the outbreak had pitched the world into the crisis it now faces.

The government is building two hospitals to accommodate at least 2,000 patients at airports in Istanbul, Erdogan he said in comments broadcast live after a cabinet meeting in Istanbul. The hospitals will open in 45 days to serve Turkey’s largest city, which has been hardest hit in the outbreak. Erdogan’s rival, Istanbul Mayor Ekrem Imamoglu, had first proposed late last month that the decommissioned Ataturk Airport serve as a field hospital.

Erdogan also said that selling protective face masks is now banned and that the state would supply them free-of-charge to citizens. Separately, a Turkish pharmaceutical firm was quoted as saying it would begin mass production of the anti-malarial drug chloroquine phosphate to treat coronavirus patients.

Erdogan barred entry and exit to Istanbul and 30 other cities late on Friday; only vehicles carrying essential supplies like food are now allowed in and out. Erdogan also issued a stay-at-home order for people under the age of 20. The Interior Ministry later issued an exception for those aged 18 to 20.

The president did not offer a reason for imposing the restrictions on the youth population, and no other countries have issued such a ban. Symptoms of the disease in young people tend to be more moderate or altogether absent, with a few deadly exceptions. Scientists believe children are often carriers who unwittingly infect more vulnerable populations. Turkey has also barred people over the age of 65 from leaving home.

The change to allow some youth to leave home may be aimed at keeping down unemployment, which Erdogan said on Monday was the “greatest criterion.” But the economic impact is still likely to be severe for a country that was already grappling with a sharp slowdown. The lira’s exchange rate — a key indicator of confidence in Turkey — fell to its lowest level since August 2018, when the country suffered a currency shock that set off a brief recession.

There are other costs. Health and Safety Labor Watch, a nongovernmental organization that reports on-the-job fatalities, said 14 of the 113 workers who died last month succumbed to COVID-19.

Arzu Cerkezoglu, the head of the confederation of progressive unions, said the government’s policy to keep production online had put blue collar workers at risk and that 88 of its members were infected with the virus. Some 15,000 construction workers have lost their jobs, she told a news site.

Thousands of builders remain at work in conditions that make slowing the spread of the virus difficult, said Yunus Ozgur, head of the union Insaat-Is. Construction and related industries make up about 10% of Turkish economic output and employ as many as 2.5 million people at the height of the season. “Under the AKP government, construction is considered essential, because it’s the locomotive of our economy,” he told Al-Monitor, using the acronym for the ruling Justice and Development Party.

“Some bosses have asked us what steps they can take to safeguard against the disease, but we’ve explained that whatever you do, we don’t stand a chance against this virus. The only thing is to stop work and furlough the workers with pay,” he said.

Ozgur estimated that 75% of sites have paused or significantly reduced the number of workers but few, if any, are paying those who have lost their jobs. The union has received reports that some companies are forcing workers to sign forms absolving employers of responsibility should they fall ill. Much of the workforce is made up of migrant workers who have left in large numbers for their homes without taking a diagnostic test, especially in the eastern Black Sea region, where they risk spreading the coronavirus, he said.

“We get calls from workers saying, ‘If I don’t die of coronavirus, I’ll die from starvation,’” Ozgur said. The union has launched a fundraiser to help those struggling to feed their families.

Turkish troops deployed to Syria, where the government has launched four cross-border incursions since 2016, will limit their entry into operation areas, “thereby reducing the movements of personnel and units to a minimum, when it is not mandatory,” the Defense Ministry said on Sunday.

The government has sought to control the flow of information on the outbreak. At least seven journalists reporting for local media outlets were detained for their coverage of the coronavirus since the pandemic reached Turkey on March 11, according to Reporters Without Borders. A journalist was remanded to custody on Friday for a tweet criticizing a government fundraising drive to help the poor during the pandemic. (Separately, Erdogan said the fund he set up last week has netted 1.5 billion liras [$222 million] in donations.)

The state media watchdog fined mainstream channel HaberTurk after a medical expert said during one of its broadcasts that a relatively low level of testing and the virus’ high rate of transmission mean that a large number of people have not been diagnosed, greatly exceeding the government’s confirmed case figures. It has also fined at least two other channels for their coverage of the outbreak.