As the death toll from COVID-19 reached 37 and cases spread across the country, Turkey pledged to accelerate diagnostic and treatment methods, while introducing new measures to keep people at home, though it has stopped short of a full lockdown. 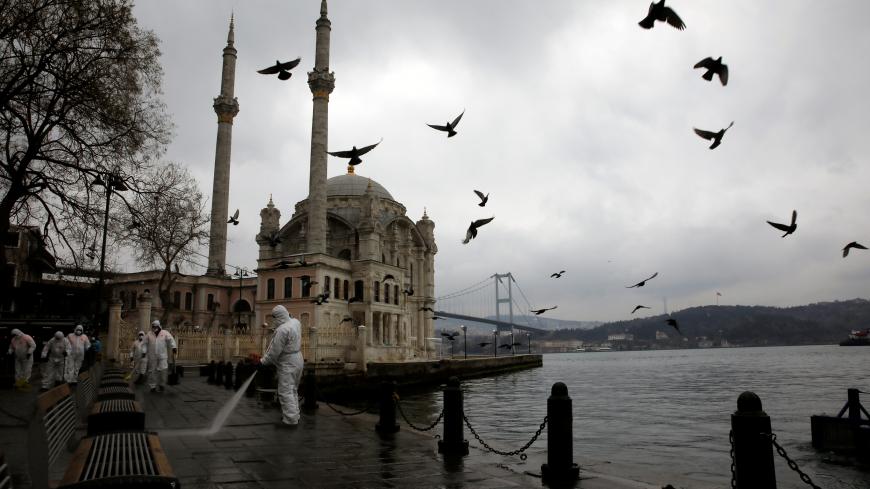 ISTANBUL — Turkey introduced additional restrictions today to keep people at home and contain the coronavirus outbreak as the number of confirmed cases mounted rapidly and spread throughout the country. The government also pledged to ramp up diagnostic testing, production of ventilators and efforts to find a vaccine.

Seven people died from COVID-19 Tuesday, raising the death toll to 44, and the official number of cases has reached 1,872, Health Minister Fahrettin Koca said on Twitter. At a news conference on Monday he said cases have been recorded “across all of Turkey” and acknowledged that local transmission of the virus now exceeds direct or indirect infection from overseas.

Turkey distributed a new drug from China to 40 cities today that promises to reduce the treatment of the disease to just four days but has not disclosed the name of the medicine. China, where the novel coronavirus first emerged late last year, is also providing Turkey with up to 1 million fast-acting diagnostic kits to expand testing, which has been conducted on 24,000 patients to date.

The Interior Ministry announced new rules for grocery stores and public transportation, limiting supermarkets’ operating hours to between 9 a.m. and 9 p.m. and customers to one person per 10 square meters of floor space. Buses within towns and between cities are only allowed to sell tickets at half capacity under the decree.

These steps follow a slew of earlier restrictions to encourage social distancing, including school closures, a ban on communal prayers at mosques, canceling cultural events and shuttering tens of thousands of businesses from gyms to beauty salons to wedding halls. Some banks have reduced branch hours, and parliament is debating early prison releases to protect the country’s large population of inmates.

Sports leagues have been suspended, though the premier Super League was the last major European soccer division to do so. On Monday, Fatih Terim, the 66-year-old manager of Istanbul club Galatasaray, tweeted he had tested positive for COVID-19. Galatasaray’s vice chairman has also contracted the disease.

More than 410,000 people around the world are confirmed to have COVID-19, and at least 18,000 people have died since the zoonotic virus was first reported in humans in central China to the World Health Organization on Dec. 31. About 20% of the world’s population is under lockdown as governments take radical steps to rein in the fast-spreading virus.

But Turkey has declined to order a full lockdown, opting for partial measures such as barring senior citizens and other vulnerable people from leaving home. Koca urged others to declare their own personal state of emergency and remain inside.

The government may be concerned about the impact of a wider cessation of activity on a fragile economy, which was slowly recovering from a 2018 financial crisis before the pandemic hit. Although Finance Minister Berat Albayrak said last week Turkey would still meet its 5% growth target for 2020, others see it differently: The hit to retail and tourism will contribute to a likely 2% contraction in Turkey’s gross domestic product this year, Britain-based Economics said in a research note Monday.

“Turkey did important things relatively early, such as school closures and banning flights from certain countries. But very few governments have been able to wrap their minds around an exponential curve, and factors like protecting the economy have gone into decision-making in Turkey, as they have in European countries and the United States,” said Howard Eissenstat, an associate professor at St. Lawrence University and senior nonresident fellow at the Project on Middle East Democracy.

The government has also asserted control over the public debate surrounding the outbreak, arresting dozens for “baseless and provocative” social media posts, and through its domination of the media, 90% of which is state-run or owned by companies close to the government.

“There are ways in which Turkey’s response has been distinctive. The way it undersold the problem to the public through the government’s control of the media shows that authoritarianism is still shaping Turkish policy,” Eissenstat told Al-Monitor. “The personalization of power and the distrust of experts [have] loomed large in foreign policy and economic policy for a long time.”

Independent journalist Murat Yetkin wrote on his blog today that the country’s coronavirus scientific committee and Health Ministry failed to convince President Recep Tayyip Erdogan that generalized social distancing was now necessary, but did not say how he obtained the information.

Erdogan, 66, is normally an omnipresent figure, giving daily speeches that are broadcast live by news channels. Since the first Turkish coronavirus case was announced March 11, he has made just one live appearance in public. Today he posted footage of his ministerial meetings held via teleconference, promising action against price gougers, protections for people unable to pay utility bills and relief for tourism operators.

The US government’s Centers for Disease Control on Monday added Turkey to a list of countries people should avoid nonessential travel to. Turkish Airlines will halt flights from March 27 to all international destinations except on five routes to New York, Washington, Hong Kong, Moscow and Addis Ababa.

Koca said Turkish hospitals’ intensive care units and stock of ventilators exceed the average of Organization of Economic Cooperation and Development nations and that capacity would be expanded. Local production of ventilators has begun, and the government is recruiting 32,000 new medical personnel. He also said Turkish scientists have begun researching a vaccine for SARS-CoV-2, the cause of COVID-19 disease.

Nearly three-quarters of Turks believe the steps taken by the government are sufficient and 60% feel the government has been transparent about the outbreak, a poll of 800 people conducted by research company Ipsos between March 13-16 showed. Only 37% of respondents believe that the coronavirus poses a danger for themselves or their family.

But data from Oxford University showed a troubling trajectory in the infection rate in Turkey: It leads all other countries in the pace of the rise after the first 100 confirmed cases.