A jump in COVID-19 cases, led by the capital Ankara, prompts new restrictions on social mobility. Dozens of health care workers have died, former government ministers have contracted the virus and doctors are warning that some cities could face a shortage of beds in intensive care units. 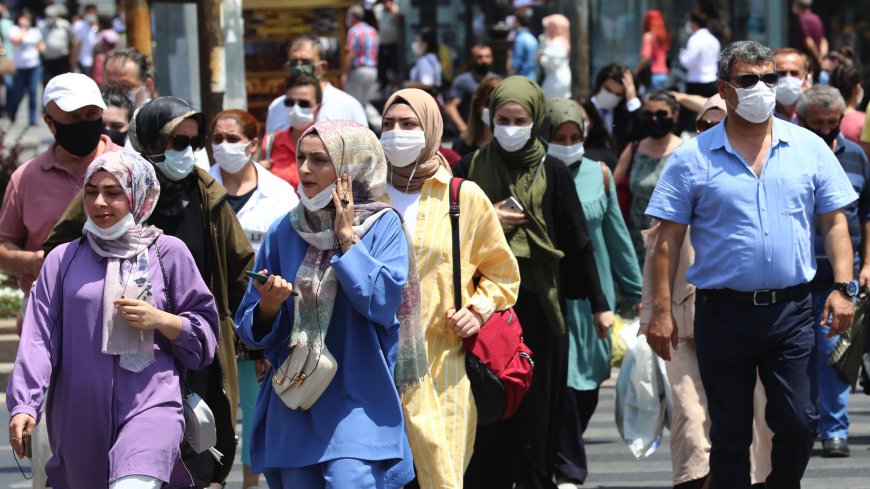 People wearing face masks walk in downtown Ankara, Turkey, on July 7, 2020, as Turkish authorities have made the wearing of masks mandatory in most of the country to curb the spread of COVID-19 following an uptick in confirmed cases since the reopening of many businesses. - Photo by ADEM ALTAN/AFP via Getty Images

ISTANBUL — Turkey is prohibiting big weddings and other celebrations in an effort to curb what the health minister called a “second peak” of the coronavirus outbreak as infection rates accelerate to the highest levels in more two than months.

President Recep Tayyip Erdogan has decided to bar wedding celebrations, circumcision ceremonies, hen nights and engagement parties in all of Turkey’s 81 provinces from Friday, following a recommendation from the coronavirus task force, the Interior Ministry said in a circular. Couples will still be allowed to marry at events without food or dancing; the celebrations will be limited to one hour.

The new restrictions came after Health Minister Dr. Fahrettin Koca chided the public for failing to engage in “controlled socialization” after the government scrapped a partial lockdown in June. “I can say that we are now experiencing the second peak of the first wave of the coronavirus,” he said at a news conference late on Wednesday.

The capital Ankara has the highest rate of infection followed by parts of the mainly Kurdish southeast, where hospitals are under strain. Meanwhile, the outbreak is “under control” in Istanbul, Turkey’s largest city, and other parts of western Turkey, said Koca.

“Our weddings, engagement parties, circumcision ceremonies and condolence [visits] have become spots that cause new bereavement. The epidemic is continuing to increase, and every day it infects more people,” Koca told reporters. But he also said, “We absolutely cannot say the outbreak is out of control,” adding that the government does not plan to impose a general curfew at this time.

The virus has not spared Turkey’s political elite. Former Prime Minister Binali Yildirim tweeted on Thursday he and his wife were diagnosed with COVID-19. Opposition party leader Ali Babacan, a former foreign and economy minister, was hospitalized on Tuesday, a week after he was diagnosed with the virus.

Koca met with members of the Turkish Medical Association (TTB) on Thursday for the first time in months. The TTB, the country’s largest physicians' group, has frequently criticized health care workers’ working conditions, questioned testing standards and official statistics, and complained that it has been excluded from policymaking.

“We discussed how the virus is quickly spreading and our concern that it is out of control, as well as certain problems health care workers are having,” TTB chairman Dr. Sinan Adiyaman told reporters after the meeting. Doctors may lose their wages if they are unable to work after contracting the illness, he said.

Adiyaman also told Koca that official statistics on infections and deaths did not match what his group has learned and what local administrators are reporting. “We told him that the figures we are receiving are completely different than the [government] tables … and that we don’t think those figures are credible,” he said.

The mayors of both Ankara and Istanbul, which are controlled by the opposition, last week accused the government of sharing inaccurate coronavirus statistics, pointing to figures from their cities that are on par with what the government has said are national rates of infection and death. Ankara Mayor Mansur Yavas said underreporting the scale of the outbreak was encouraging people to gather.

A prominent Ankara physician called Ankara the new Wuhan in a tweet, warning that intensive care units may soon be overwhelmed and the city needed to lock down.

At the press conference, Koca denied the Health Ministry has interfered with data collection and said it relied on doctors’ reporting, adding it was more likely health officials were overcounting the number of patients with COVID-19.

The economic toll of the pandemic was exposed earlier this week when the government reported gross domestic product shrank by a record 11% between April and June on a quarterly basis, or 9.9% year-on-year. Despite the dramatic slowdown, official figures on Thursday showed inflation is stuck in the double digits at 11.7% in August.

The football federation on Thursday said it was heeding Koca’s advice and dropping plans to allow fans back into stadiums until at least the second half of the season. The sporting body had previously planned to allow stadiums to operate at 30% capacity beginning next month.