Turkey's health minister has announced the start of human trials in Turkey with Chinese, US and Russian vaccines and says the end of the crisis is in sight. 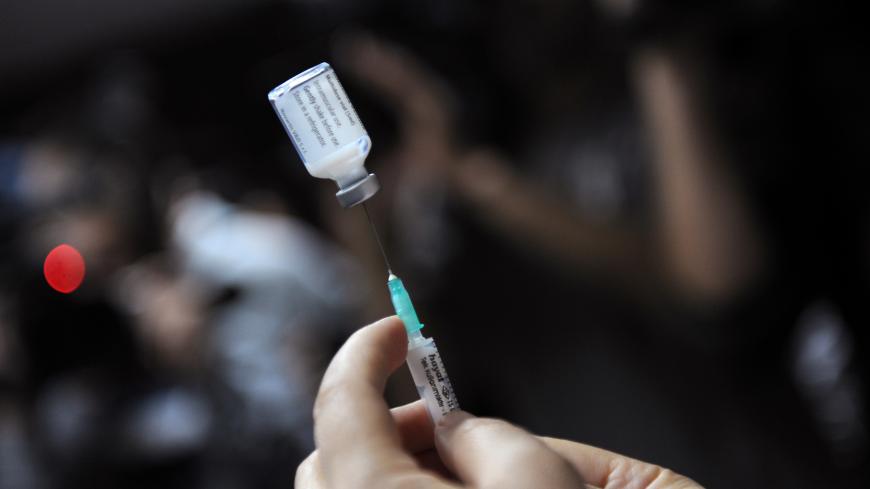 A nurse prepares a shot of the A(H1N1) vaccine (Pandemrix from Glaxo Smith Kline -GSK- laboratory) to a hospital staff member in Istanbul, on Nov. 2, 2009. - BULENT KILIC/AFP via Getty Images

ISTANBUL — Turkey is starting clinical trials of potential vaccines for the novel coronavirus, working with drugmakers in China, the United States and other countries.

On Wednesday, three Turkish health workers at an Ankara research hospital began Phase III trials of Chinese manufacturer Sinovac Biotech’s vaccine, Health Minister Fahrettin Koca said at a news conference after a meeting with the government’s coronavirus task force. The trial will eventually be expanded to 10,000 volunteers and the vaccine’s effectiveness in creating antibodies will become clear within a month.

Turkey will also participate in US drugmaker Pfizer’s clinical trials of a coronavirus vaccine that will soon begin in Istanbul, he said late on Wednesday. It may approve Phase III trials of a Russian treatment as early as next week once it determines that problems with the drug have been resolved, he said. He did not specify the problems.

“Our citizens may have genetic or regional differences. To see if this has an impact, we believe it is important to take different actions. So we are not working with just these three vaccines but are closely cooperating on other vaccines,” Koca said. “We are engaged in efforts to obtain at an early stage the vaccine that gives us confidence and results.”

The government hopes one of these treatments will be available to the general public by the end of the year.

Turkey is continuing to develop its own vaccines as well, but work remains in the preclinical stages and won’t be ready for production until 2021, he said.

Despite the promise of a remedy, Koca warned that Turkey is grappling with its toughest days of the outbreak as the total case count approaches 300,000. “Today we and the world are confronted with a more difficult period than we were at the beginning of this pandemic,” he said.

On Thursday, the Health Ministry said 66 people died of COVID-19 and 1,648 were diagnosed with the disease. That figure has been above 1,500 every day this month in what Koca has described as a “second peak” in the outbreak. More than 7,300 people have died since the virus reached Turkey in March.

In an effort to curb the rise, the Interior Ministry stated in another circular that those who test positive and fail to self-isolate will be taken to dormitories or small hotels to complete their quarantine. It has recorded more than 20,000 violations of stay-at-home orders since Aug. 22.

Koca said the coronavirus task force has not recommended the government impose a wider lockdown and that it was not a preferred method to curb the spread.

“The burden on our health care workers is four to five times higher than it was at the beginning. … Hospitals are the front line in this war, and we have had losses at this front,” Koca said.

But health care workers are also facing attacks from politicians. The leader of the government’s ultranationalist partner demanded the nation’s largest doctors’ group be outlawed for questioning the government’s handling of the outbreak and that its leaders be prosecuted.

Devlet Bahceli, the leader of the Nationalist Movement Party, was outraged over what he called a “poisonous and evil plot” by the Turkish Medical Association (TTB), which asked members to observe a moment of silence Thursday and wear a black ribbon to honor the 90 medical workers who have died after contracting COVID-19.

“The Turkish Medical Association is as dangerous as corona,” Bahceli tweeted late on Wednesday. “Telling the government, 'You cannot manage it, we are dying, we are burning out,' is a treacherous plot.” He questioned the group’s Turkishness, called it “treasonous” and said it should be immediately replaced with “patriotic scientists.”

Despite only controlling 8% of parliamentary seats, Bahceli wields outsized influence over the ruling Justice and Development Party by delivering it the majority it needs to pass legislation and is credited with the government’s sharp swerve toward nationalism.

The TTB said on Thursday it would not be cowed by such threats.

“Sharing with the public warnings and recommendations based on scientific data for public health is the Turkish Medical Association’s universal, legal and ethical responsibility. It is our debt of loyalty to remember with a black ribbon our colleagues lost to COVID-19 and their loved ones and to prevent further losses,” the TTB said in a statement in response to Bahceli’s salvo.

The TTB has complained that doctors are facing criminal investigations for their criticism of public health policy in an effort to control information about the outbreak. Doctors as well as opposition politicians have cast doubt on the veracity of official figures, saying the likely case count is far higher.