Turkish medical associations as well as the mayor are appealing to the Turkish government to close down Istanbul as daily deaths reach April levels. 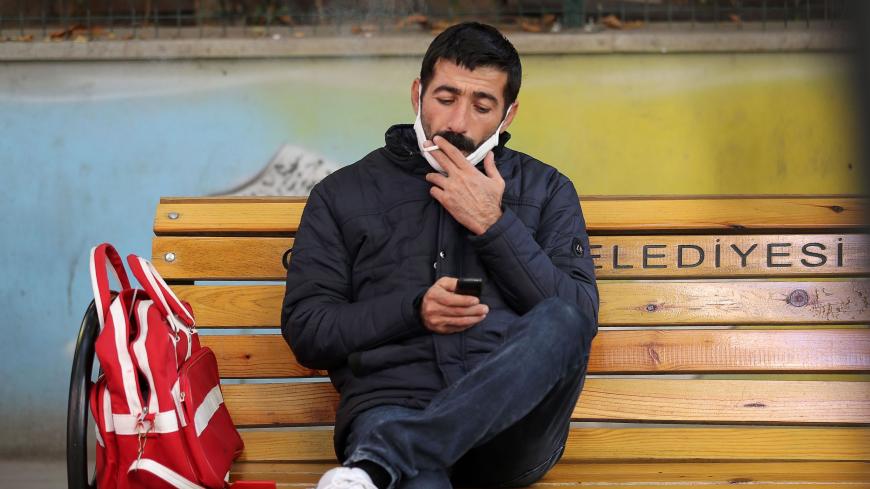 A man sitting on a public bench smokes a cigarette while using his mobile phone in Ankara on Nov. 13, 2020, after Turkey banned smoking in outdoor public areas as part of restrictions aimed at curbing the spread of the COVID-19 pandemic. - ADEM ALTAN/AFP via Getty Images

Turkey’s overloaded medical sector appealed to the government for a total lockdown of the country for a minimum of two weeks up to a month to control the spike in COVID-19 cases all across the country, particularly in its biggest and most affected city.

Meanwhile, Istanbul's hospitals have crumbled under mounting cases and demands for tests, with long queues and angry patients, as the number of deaths reached levels last seen in April, the height of the pandemic.

On Nov. 14, the Ministry of Health reported 3,119 new confirmed cases, but that figure includes only symptomatic patients. Medical associations say that the government's lack of transparency not only puts health professionals at risk but stops Turks from being sufficiently vigilant on social distancing and hygiene.

The figures from the ministry show a rise in the number of critically ill patients. The number of deaths in the last 24 hours was given as 94, and the total death toll has exceeded 11,600.

Istanbul Mayor Ekrem Imamoglu said Nov. 14 that 164 victims of infectious disease had been buried in Istanbul in the past 24 hours, underlining that this is the highest number since the beginning of the pandemic. “I offer my condolences to the families of 164 people who died in the last 24 hours,” he tweeted. “Health Minister Fahrettin Koca, you are getting late in taking action.”

The number of daily cases in Istanbul have risen to 10,000 — roughly four times as many as the government claims, the Turkish Medical Association (TTB) warned in an online press conference on Nov. 11. Sebnem Korur Fincanci, the TTB chair, said that the dedicated coronavirus units were now unable to deal with the patients and a lockdown similar to those across Europe is urgently needed.

The association’s findings, summarized in an eight-month assessment by its COVID-19 watch committee, point to a much higher number of daily cases than the numbers of symptomatic patients disclosed daily by the government. The TTB report said that there were about 10,000 daily cases in Istanbul and 4,000 in Ankara.

Other medical associations also called for urgent action in Istanbul, which the TTB called the Wuhan of Turkey earlier this year. Similarly, the Turkish Thoracic Society warned in its monthly report earlier last week that the situation in Turkey, particularly in Istanbul, is now worse than the first peak of the outbreak in April and May.

A group of medical experts from the Istanbul Medical Chamber presented the Istanbul Municipality with an urgent action plan on Nov. 12. The plan requests the immediate closure of all restaurants, bars, spas, fitness centers, museums and theaters.

Dr. Nilufer Aykac, one of the authors and a member of the COVID-19 watch committee of the Istanbul Medical Chamber, told Al-Monitor that they propose curbing activity in all but most vital sectors, such as food, health and transportation. The report urges that all educational institutions, with the exception of nurseries, be kept closed.

The government had already announced new measures earlier this month. Worried that people lowered their masks to smoke, the Interior Ministry announced a smoking ban in all outdoor public places. A partial curfew was imposed on Turkey’s senior citizens, who grudgingly observed a full curfew during the first wave of the pandemic. President Recep Tayyip Erdogan announced that restaurants, bars, pools and cinemas will be closed after 10 p.m.

“We waited for three and a half hours to take a test,” complained a young woman waiting at Istanbul’s Haseki Education and Research Hospital. In a video that was picked up by the press, the unnamed person complained that those who could not afford to go to a private hospital were “lumped together with no social distancing” while they waited for hours for a test. “If you are rich, it is OK, but if you are poor …” the woman said.

Those who test positive are desperate, according to another report prepared by Aykac and her colleagues. It says that in Istanbul, some COVID-19 patients are kept on stretchers for hours while waiting for an ambulance. Some patients — including those who should be taken to intensive care right away — remain in the care of emergency services because there are no beds available. The situation is similar in Izmir, Turkey’s third largest city, where lapsed social distancing during rescue operations and while people lived in tents following a 7.0-magnitude earthquake on Oct. 30, raised fears of a new outbreak.

“We get messages in professional WhatsApp groups that there is a shortage of intensive care beds,” a doctor told Al-Monitor on condition of anonymity.

“One of our colleagues in Istanbul who tested positive for the virus waited 24 hours to find a vacant bed,” tweeted Dr. Bulent Tutluoglu, a pulmonologist who tested positive during the first wave in the spring and has since recovered. “The situation is grave. Patients in Istanbul are literally going from hospital to hospital to find a place. If this situation continues, our colleagues in Istanbul will be forced to choose whom to take and whom to turn away, like in Europe.”

“We in the health sector are at the end of our rope,” he told Anka News agency. Hundreds of doctors and other health personnel have resigned this year, saying that their lives were at risk due to inadequate protective measures including masks and even regular tests. In October, the Health Ministry banned health care workers from quitting their jobs and taking annual leave.

On Nov. 12, TTB called for health workers around the country to turn off the lights for a minute at nine o’clock each day to express their frustration with the government’s policies, particularly in its failure to recognize COVID-19 — which has claimed the lives of more than 100 health workers — as an occupational hazard. The nine o’clock shut down is a callback to the “one minute of applause” for health professionals after Turkey had its first case on March 11.

“Turkish Medical Association has announced that 152 health workers have passed away in the pandemic, including 66 doctors,” Aykac told Al-Monitor. “The situation is both grave and urgent. We want to live and help others live but we can only do that if we are well ourselves."