The government says inspections of businesses will be increased to ensure enforcement rules on masks and physical distancing as the country battles more than 1,000 new cases a day. 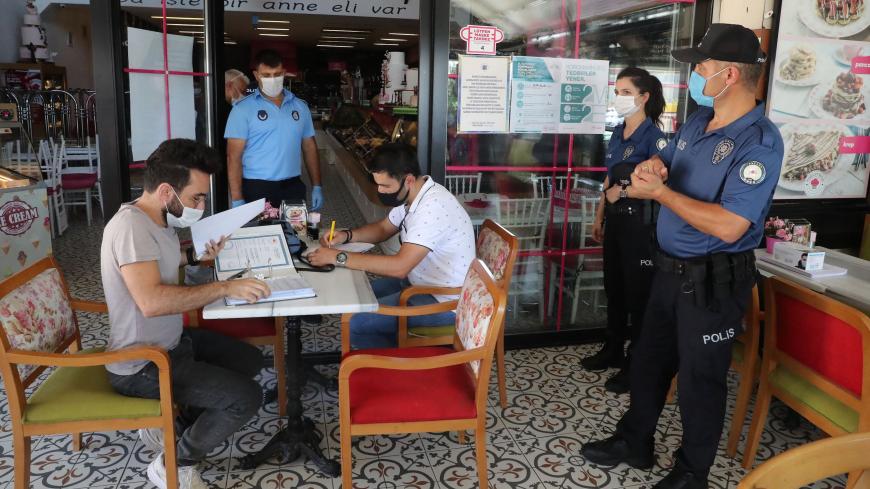 Turkish police officers and paramedics inspect a restaurant as new measures are enforced to fight the novel coronavirus, in Ankara on Aug. 6, 2020. - ADEM ALTAN/AFP via Getty Images

ISTANBUL — Turkish medical professionals are worried Turkey may lose control of the coronavirus outbreak as the country passed the grim milestone of a quarter million cases this week.

Official figures showed 1,263 more people were diagnosed with COVID-19 on Tuesday, bringing the total number of cases to 251,805 since the novel coronavirus reached Turkey in March. New daily cases have been above 1,000 every day since Aug. 4. They were last at these levels at the end of June.

Health Minister Fahrettin Koca said on Monday most of the new cases were “easily treatable but the number of those who are seriously ill for whom treatment is difficult is rising.”

Turkey ended a partial lockdown at the beginning of June in an effort to kickstart economic activity. On Tuesday, the Interior Ministry said it would step up inspections of businesses, transportation, beaches, wedding halls and other facilities to make sure they are complying with rules on hygiene, mask-wearing and physical distancing.

“The current situation in our country shows we are on a rising trajectory [and] without having brought the first wave under control, the outbreak is starting to get out of control,” the Turkish Medical Association said in a press statement Tuesday.

The jump in COVID-19 cases means “Turkey is fast approaching the second peak in the first wave,” the Turkish Thoracic Society said on Friday. Insufficient testing, changes in hospital admission criteria and overworked health workers were contributing to the rise in cases, it said, and reported that some provinces are seeing shortages of drugs.

“Activities that do away with social distancing, such as weddings, tests, public transportation, congregational worship and touristic travel have become the norm. Fighting the pandemic has been relegated to personal responsibility,” the Thoracic Society said in a statement.

In a striking example of the risks of mass gatherings, 35 people contracted COVID-19 last month at a wedding in the Black Sea town of Ordu after a sick guest from Istanbul shared her makeup with 20 other attendees, local media outlets reported this week.

Turkish scientists published a letter in the medical journal The Lancet at the weekend saying a requirement by the Health Ministry that researchers first get government approval for studies into the coronavirus in Turkey was hampering research. A lack of transparency by the Health Ministry and a refusal to collaborate was leading to tension between the government and scientific groups, the letter said.

It also said Turkey’s noncompliance with World Health Organization classifications likely means it is undercounting coronavirus deaths. Turkey does not count patients who exhibit COVID-19 symptoms but test negative for the virus. The Thoracic Society said the polymerase chain reaction (PCR) test only identifies 40% of cases.

Istanbul alone had nearly 2,000 unexplained deaths between March 11 and July 5, when researchers compared deaths to the average between 2016-2019 and excluded those confirmed to have been caused by virus, the researchers wrote.

A rise in cases in the central city of Konya is due to patients who have tested positive refusing to self-isolate and continuing to mingle socially and go to work, the head of the local physicians’ chamber said. Funerals and prayers at mosque were also contributing to the rise, he said.

Last week, the Interior Ministry said it was establishing “neighborhood inspection teams” comprised of prominent local figures to monitor people who are required to self-isolate, either because they have tested positive or were in contact with someone who has. The ministry said it these teams would inform authorities if people broke quarantine rules. Electronic monitoring may also be used, it said in a circular.

The leftist People’s Democratic Party criticized the government’s prioritization of the economy over workers’ health. It submitted a parliamentary motion to bar a “closed-circuit working system” in which some major Turkish manufacturers have set up camps where workers are required to stay between shifts. At least one factory still had a coronavirus outbreak.

This “violates human rights and the constitution. Workers are essentially forced to stay apart from their homes and families and work day and night, which is on par with slavery conditions,” lawmakers wrote, according to an emailed statement on Monday.

The Turkish Medical Association urged public health officials to take additional measures to limit the spread so that schools can open for in-person instruction as planned on Sept. 21. The association welcomed the government’s decision last week to delay the start of classes for the country’s estimated 18 million primary and secondary students by three weeks “at a time when the number of COVID-19 cases are increasing in an uncontrolled way.”

The Health Ministry's coronavirus advisory board is not currently considering new social distancing restrictions, some of its members told Sozcu newspaper on Tuesday. But some provinces were already introducing new curbs on senior citizens, such as barring them from markets, funerals or public transportation during peak hours.

Meanwhile, another health scare hit the Black Sea town of Trabzon. Authorities on Tuesday placed a neighborhood under quarantine and two people were hospitalized after eating meat from an animal infected with anthrax.