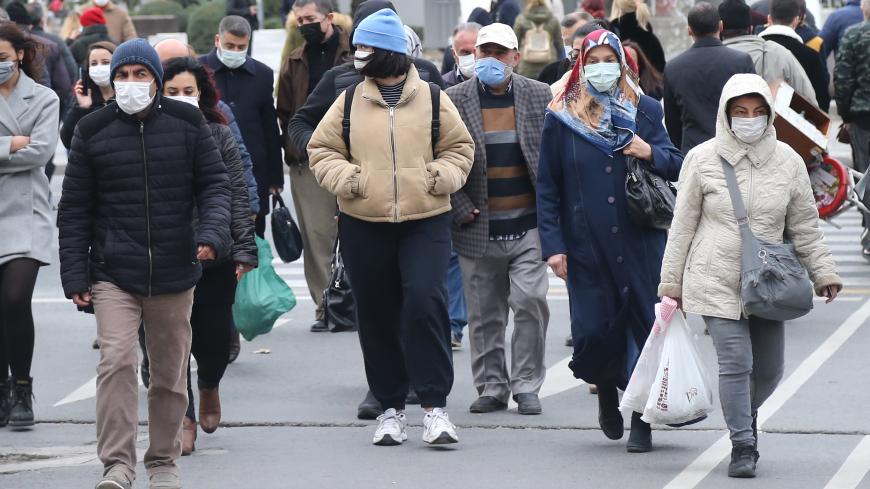 Effective Tuesday, the new restrictions ban citizens from leaving their homes between 9 p.m. and 5 a.m. on weekdays and full curfews will be enforced on weekends. The measures come after partial curfews imposed last month failed to slow contagion rates, and extend curfew exemptions for workers in the agriculture, forestry, health care, logistics and production sectors.

“We’re trying to find methods that protect the people’s health and also allow the continuation of production, commerce, employment and social life,” Erdogan said Monday, while introducing the measures.

Though health experts have repeatedly called for tighter restrictions to stem COVID-19 rates, Turkish labor rights leaders criticized the new curfews, saying they fail to protect employees in exempted sectors who must continue to work under the threat of contracting the coronavirus.

“The new regulations completely ignore working life,” Arzu Cerkezoglu, chair of the Confederation of Progressive Trade Unions of Turkey, told Al-Monitor. “The understanding is that production will continue at all costs.”

Cerkezoglu, who herself contracted the virus and was ill for two weeks, noted that infections are prevalent in the industrial sectors. She said a recent study conducted by the Turkish metalworkers union found infection rates to be as high as 10% in some metal foundries.

“Except for essential sectors, all workplaces must close for at least 14 days,” Cerkezoglu told Al-Monitor. “During this period, economic and social measures should be taken to meet workers’ needs … and employees should be placed on paid leave.”

On Tuesday, Turkey’s Health Ministry reported 30,110 new cases and a record 190 deaths in the last 24 hours, placing Turkey among the nations with the highest number of new daily cases, including the United States, India and Brazil.

Under restrictions introduced Monday, senior citizens and people under 20 years of age will not be permitted to use public transportation on top of a previous partial curfew, which permitted them to be outdoors for three hours a day.

People entering shopping malls will be required to participate in contact tracing, while weddings and funerals will be limited to 30 people. Further measures include the closure of preschools and restrictions on intercity travel. Meanwhile, food venues will continue to operate with delivery service only.

“It is both our obligation and our responsibility to comply with these measures throughout the nation,” Turkish Health Minister Fahrettin Koca tweeted following Monday’s announcement. “We can only win the fight together.”

Husnu Yildirim, co-president of Turkey’s Health and Social Service Laborers Union, said the current measures are insufficient to stem infection rates. He echoed calls for a full lockdown of at least two weeks, saying health workers have reached the “point of exhaustion.”

“One cannot conduct a fight against the pandemic with a gradual increase in restrictions,” Yildirim told Al-Monitor.

He added, “Health workers are doing their best to respond. However, executives want health workers to work regardless of their condition, basically telling them, ‘Work even if you have COVID.’”

Among the many pandemic response recommendations set forth by the union, the group has called for more transparency in the distribution of national COVID-19 data, the allocation of sufficient personal protective equipment for all health workers and a four-week ban on international travel.

Following a reversal of travel bans earlier this year, few international flight restrictions have been imposed in Turkey, with the European Organization for Air Navigation Safety reporting Istanbul Airport saw the highest number of flights in Europe between Nov. 18 and 26.

Erdogan also prompted citizens to give up smoking and follow state face mask and social distancing guidelines, before reiterating Turkish officials had signed a contract to buy 50 million doses of a COVID-19 vaccine produced by a Chinese company.

Vaccine distribution is expected to begin this month free of charge, Erdogan said, with health workers and high-risk individuals set to receive initial doses before the general public.

“We are taking steps carefully not to turn the health crisis into a full-blown economic and social crisis,” Erdogan said.