The negative responses highlight what secular members of Turkish society perceive as the government’s interference in their lifestyle choices. 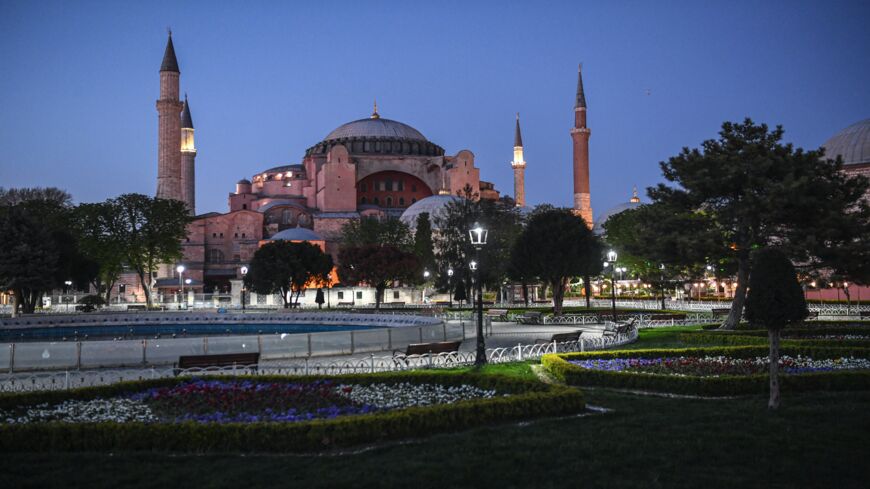 A picture taken on April 24, 2020, shows the Blue Mosque square with the Hagia Sophia museum in the background on the first day of Ramadan during a 4-day lockdown as the country adopts measures to curb the spread of the COVID-19. - OZAN KOSE/AFP via Getty Images

ISTANBUL — A slick promotional video for Istanbul from the Turkish government has provoked a wave of scorn and mockery for presenting an image of the city at odds with the ruling party’s vision for the country.

The one-minute film, titled “Istanbul Is the New Cool,” features chicly dressed twenty-somethings strutting and dancing around the city’s near-empty streets to an upbeat soundtrack.

Taking in sights such as Hagia Sophia, Galata Tower and the Grand Bazaar, the video’s actors snack on fish sandwiches, take a ride on a Bosporus ferry and sit down for dinner overlooking one of Istanbul’s iconic bridges.

There is even an unexplained shot of ballet dancers performing in a public square.

The reaction to the Culture and Tourism Ministry’s polished production has been far from what those who commissioned it must have hoped for.

“Is this Turkey in a parallel universe without the AKP?” tweeted Istanbul musician Gaye Su Akyol, referring to President Recep Tayyip Erdogan’s Justice and Development Party.

“The film’s original name is ‘Istanbul after the AKP,’” joked another Twitter user.

“Women dancing, ballet in the street, colorful nightlife, drinks, tables. … It’s so beautiful, I wonder what country this is,” another added.

Although humorous in nature, the negative responses highlight what secular members of Turkish society perceive as the government’s interference in their lifestyle choices.

Under the 19-year rule of the conservative, Islam-oriented AKP, restrictions on nightlife and alcohol have increased, a development that became starkly apparent during the coronavirus pandemic.

Alcohol sales were banned during a 17-day lockdown in May, and even when most restrictions were lifted at the start of July, a block on music after midnight in bars and nightclubs remained in place.

“There’s an irony here, but there’s also huge hypocrisy involved because it’s the AKP government that has pressured secular groups in the country, tried to directly target them, in some cases even criminalize their lifestyles,” said Berk Esen, assistant professor of political science at Istanbul’s Sabanci University.

“They have done their utmost to make sure that Turkish society would become a lot more pious.”

He said the film also showed the government’s “desperation” to attract tourists amid an economic crisis made worse by the COVID-19 pandemic.

Comparing Turkey to Gulf states where drinking and other practices incompatible with Islam are accepted for foreign tourists, Esen described “enormous pressure on Turkish citizens not to subscribe to that lifestyle and to have those areas limited to international tourists.”

The video is not the first promotional film from Turkey’s tourism chiefs to stir controversy in recent months. In May, a video aiming to show Turkey as a “safe haven” for tourists during the pandemic was removed after complaints of tourists being prioritized ahead of Turks.

The film showed hotel and restaurant staff wearing face masks that read “Enjoy, I’m vaccinated,” serving unmasked tourists at a time when Turks were ordered to stay at home and most were waiting to be vaccinated.

Commenting on the latest promotional video, Cuneyt Uygur, an Istanbul-based guide who organizes culinary and wine tours, said, “It’s a very incongruent video — like nothing’s happened in the world, there’s no COVID and everything’s fine.”

Uygur said the footage would not appeal to his European clients but to “people coming from the Middle East who think Turkey is more modern and young people are free and can dance in the street.”

He added, “The AKP doesn’t want young people to dress like this and dance like this in the street.”

The video heavily features many of Istanbul’s historic structures, including the Hagia Sophia, which was reverted from a museum to a mosque by the government last year.

“The Ministry of Culture and Tourism’s latest video reduces Istanbul’s rich heritage to the background of an Instagram post,” said Tugba Tanyeri Erdemir, research associate at the University of Pittsburgh and a member of Turkey’s Association for the Protection of Cultural Heritage.

“In most of its restoration projects, the Turkish government’s goal is simply to make historic buildings photogenic without a long-term and inclusive preservation plan for the sites. This video is yet another expression of the AKP’s problematic approach to historic preservation.”

While the video embraces a certain vision of Western lifestyle, some boundaries appear to be non-negotiable — the diners overlooking the Bosporus Bridge appear to be drinking nothing stronger than water.

The final scenes of the film also feature perhaps the most prominent physical representation of Erdogan’s rule over Istanbul: the huge, neo-Ottoman Camlica mosque that was opened two years ago and now looms above the city.

Referring to the fun-loving scenes in the video, Esen said, “The longer the AKP stays in power, the more those images will become distant memories.”