The recent conversion of a Byzantine church in Trabzon from a museum to a mosque is prompting worries that Hagia Sophia in Istanbul might be next. 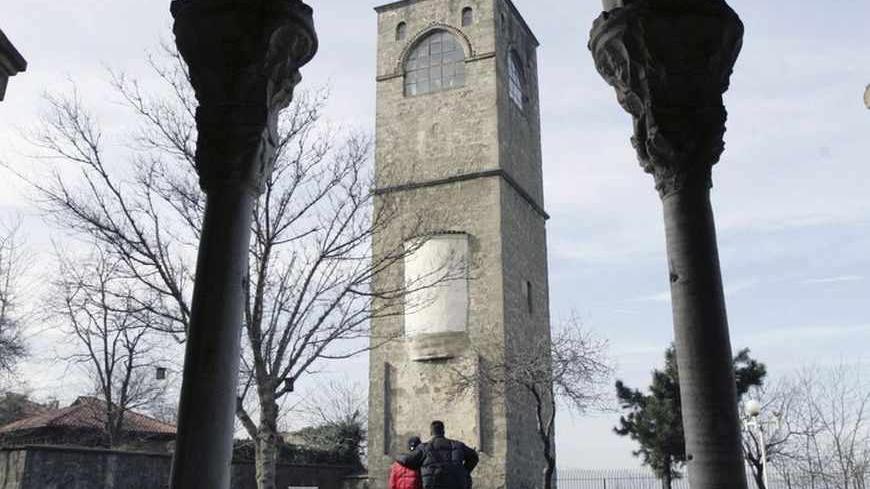 Perched on a grassy hill overlooking the Black Sea, the Hagia Sophia church in the northeastern port city of Trabzon is hailed as one of the finest, and pitifully rare, examples of late Byzantine architecture still standing in Turkey. As The Economist’s Bruce Clark put it in Twice a Stranger, his much acclaimed history of the population exchange between Turkey and Greece in the early 1920s, “the frescoed biblical scenes in the church of Hagia Sophia … are evidence that the Greek spirit flowered with particular brilliance in the 13th century.”

Today, the Greek spirit at Hagia Sophia has been all but extinguished, its frescoes determinedly concealed by tenting stretched under its central dome, and its magnificent tiled floors obscured by crimson carpeting. A Turkish flag hoisted by a newly erected preacher’s pulpit drove the message home: Hagia Sophia is ours. What had happened?

Sadly, it came as no surprise that Hagia Sophia had been converted into a mosque. Built in in the mid-13th century, the church had been at the heart of a long-running dispute between Turkey’s secularists and its Islamists. Its outcome has dramatic implications for the world-famous Hagia Sophia in Istanbul and flies in the face of the ruling Islam-based Justice and Development Party’s (AKP) moves to restore various Christian monuments across the country.

The debate over Hagia Sophia is cloaked in historical legalese, but its essence is political. The Islamists claim that Mehmet II, the Ottoman sultan who wrested Istanbul from the Byzantines in 1453, converted the church to a mosque in 1462 following the conquest of Trabzon. Therefore, the Islamists argue, Hagia Sophia in Trabzon must remain open to Muslims for worship, otherwise the sultan’s legacy would be breached. The secularist argue that Hagia Sophia did not become a mosque until a century later and contest the claim that it belongs to the sultan, asserting there are no documents to prove this.

In fact, for the past 50 years Hagia Sophia in Trabzon was neither a church nor a mosque. After being rescued from dereliction by a team of archeologists from Edinburgh University between 1958 and 1962, the church reopened its doors to the public as a museum. This stemmed from a practical formula devised to get around the dispute and one that was successfully tested at the Istanbul Hagia Sophia, which has been a museum since 1935.

In December 2012, however, a local court ruled in favor of the General Directorate of Pious Foundations, or Vakiflar, the government body responsible for the country’s ancient mosques, declaring that the mosque was an “inalienable” part of the foundation of Mehmet II. The Ministry of Culture, the court held, had been “illegally occupying” the building. The government swiftly embarked on the conversion, and it was declared complete on July 5, when the mufti of Trabzon and other citizens gathered there for the first Friday prayers of the holy month of Ramadan.

The move provoked an outcry in the academic world. “The conversion into a mosque is nothing but tragic. It will inevitably lead to damage in the structure and its priceless decoration, both sculpted and painted,” Veronica Kalas, a Byzantine historian told Al-Monitor.

Antony Eastmond of London’s Courtauld Institute has closely studied the church and agrees. “The paintings at the Hagia Sophia are important as the best surviving imperially sponsored paintings in Turkey. They are vitally important in understanding the nature and development of the empire of Trebizond, the offshoot of the Byzantine Empire that was established in the city in 1204 and outlasted Constantinople, only to fall in 1461,” he told Al-Monitor.

“What I find most alarming in the recent changes is the fact that most of the discussion is done through a discourse of 'conquest' [fetih]. It does fit with the AKP’s neo-Ottoman ambitions and pretentions,” said Tugba Tanyeri Erdemir, a Turkish art historian.

Such views are widely, and somewhat unusually, echoed in Trabzon, a city notorious for its ultra-nationalist leanings. As news of my presence and mission to report on the conversion spread, locals flocked to me, eager to convey their anger. Zeki Bakar, the headsman for Fatih, the neighborhood where Hagia Sophia stands, noted that there were “more than enough mosques” to go around “without adding another.” “Half of them are empty,” Bakar asserted.

Suat Gurkok, who heads the Black Sea branch of TURSAB, the national lobby for tourism agencies, claimed that since the conversion, tourists, for whom the city has little else to offer other than Hagia Sophia, had began canceling their bookings.

“There is nothing left for them to see. Come and look,” pleaded Ali Kaynar, a local businessman who said his souvenir shop had been deserted for days. Thus I succumbed to yet another depressing tour of Hagia Sophia. Stripped of its museum status, the church lost the security guards charged with protecting the ancient sculptures and tombstones scattered across its once verdant garden.

“Anyone can come and steal these at any time,” Kaynar fumed. Meanwhile, a trickle of unsupervised tourists snap pictures with their flashes on, which can damage to the few frescoes that remain in view.

Two down, one to go?

The fate of Hagia Sophia in Trabzon appears to have been sealed in July 2012, before the court ruling, when Deputy Prime Minister Bulent Arinc, whose portfolio includes the Vakiflar, inaugurated a mosque in the western town of Iznik. The new mosque had until then also been a Hagia Sophia museum, or more precisely, Hagia Sophia of Nicaea, as Iznik was known during early Christendom. Here bishops from across the Roman Empire gathered to reach consensus about the Christian faith at the First Ecumenical Council in the year 325.

In a speech to mark the conversion, Arinc heralded the happy news: “We have opened the Iznik Ayasofya mosque to worship. Insha'allah, we will be delivering that of the opening of the Ayasofya mosque in Trabzon as well. The mosque has been turned into a museum, such things cannot happen during our rule. Mosques are places of worship to Allah,” he said.

With two Hagia Sophia’s converted to mosques in such rapid succession, the question now preying on many a mind is whether the Hagia Sophia in Istanbul is next. There is a small but noisy campaign being led by Islamists and ultra-nationalists pushing for conversion. Mazhar Yildirimhan of the Vakiflar in Trabzon argues that the legal case for its conversion is airtight, and he makes no secret that he would like to see Hagia Sophia in Istanbul become a mosque. “It is what Fatih [Mehmet II “The Conqueror”] ordained,” he said to Al-Monitor.

Western diplomats warn that the court ruling for the Trabzon Hagia Sophia has set a dangerous precedent. Even so, converting Hagia Sophia in Istanbul seems far-fetched. Restoration work on the famous basilica has continued throughout a decade of AKP rule, and new frescoes have been uncovered. Prime Minister Recep Tayyip Erdogan has himself dismissed speculation about Hagia Sophia’s future. Drawing around 3.3 million visitors in 2012, the museum is in the words of Kalas, the Byzantine historian, “a money-generating machine.” Kalas believes Hagia Sophia will not be converted into a mosque “precisely for this reason, … not because [the government] doesn’t want this to happen,” she concluded.