Erdogan converts another historic church into a mosque

The centuries-old Chora church, which has served as a museum since 1945, will soon be open to Muslim worship. 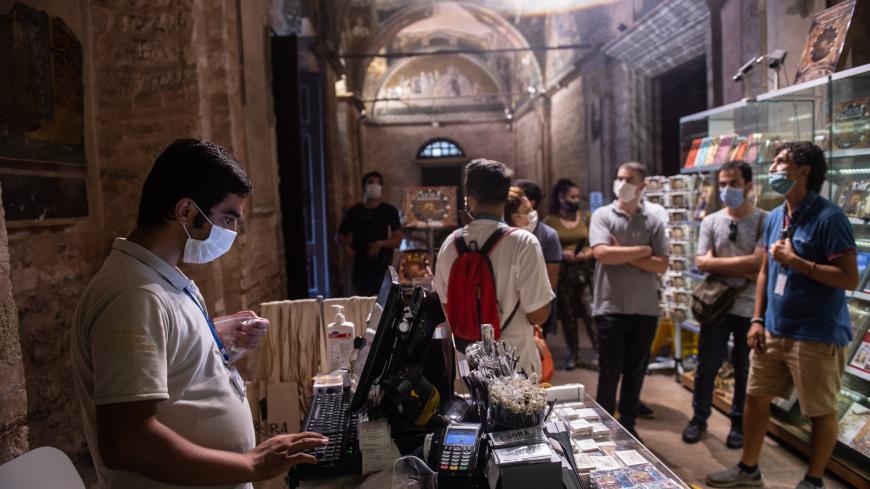 Visitors stand in the gift shop of the Chora (Kariye) Church Museum on Aug. 21, 2020, in Istanbul. The Turkish museum will be reconverted to a mosque and open to Muslim worship as ordered by a presidential decree; the decision to transform the museum into a mosque comes just a month after President Recep Tayyip Erdogan controversially changed the Hagia Sophia Museum back into a mosque. The Chora dates to the Byzantine era; during the Ottoman era it was converted into a mosque before becoming a museum in 1945. - Burak Kara/Getty Images

Following the transformation of Istanbul’s iconic Hagia Sophia, Turkish President Recep Tayyip Erdogan today declared that another ancient church-turned-mosque now functioning as a museum will be converted back into a mosque.

The medieval church in Istanbul largely dates to the 11th century and was originally known as the Church of the Holy Savior in Chora in what was then Constantinople. After the Ottoman conquest of the city, the church was turned into a mosque, the Kariye Camii, in the early 16th century.

Then in 1945, the Turkish government ordered that the building, which is located in Istanbul’s Fatih district, be used as a museum as part of efforts to secularize the country. A Turkish court in November annulled Chora’s museum status and on Friday, Erdogan declared “the management of the Kariye Mosque be transferred to the Religious Affairs Directorate, and opened to worship.”

The pro-government Daily Sabah newspaper reported that Turkey’s religious authorities plan to cover the renowned Byzantine-era frescoes and mosaics during prayers. A similar approach was taken with the Hagia Sophia, the UNESCO World Heritage site converted to a mosque last month.

Erdogan, who led thousands in the first prayers after the Hagia Sophia’s conversion, did not say when the centuries-old structure will begin use for Muslim worship.

The changeover has drawn criticism from Erdogan’s political rivals and church leaders who said the move would harden Turkey’s religious divide. Garo Paylan, an opposition lawmaker, called the conversion "a shame for our country.”

"One of the symbols of our country's deep, multicultural identity and multi-religious history has been sacrificed," he wrote in a tweet today.

The Greek Foreign Ministry called the transformation "yet another provocation against religious persons everywhere" by Turkey’s government.