While many pious Turks and some Muslims throughout the world celebrated the decision to revert the world heritage site to its pre-Ataturk status, others warned of the move's potential to create further domestic polarization. 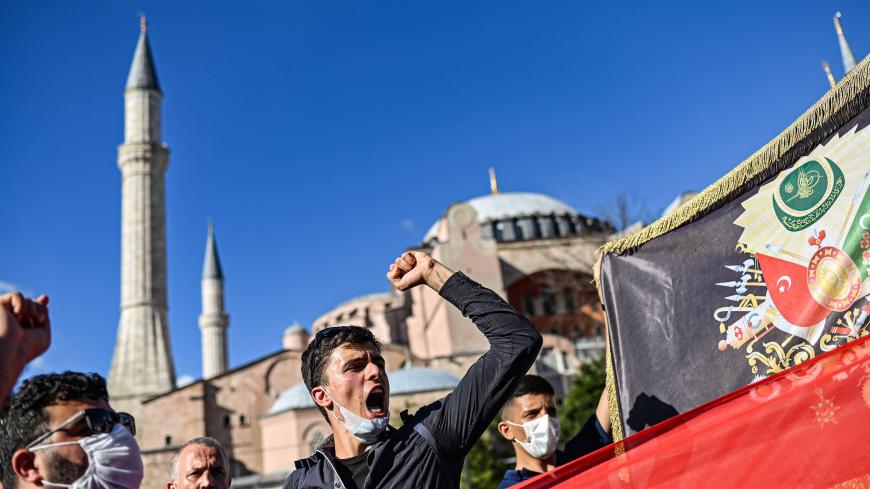 People gather to celebrate outside the Hagia Sophia museum on July 10, 2020, in Istanbul after a top Turkish court revoked the sixth-century Hagia Sophia's status as a museum, clearing the way for it to be turned back into a mosque. - OZAN KOSE/AFP via Getty Images

Crowds brandishing Turkish flags and shouting “Allahu akbar” — God is great — began forming outside the Hagia Sophia, an icon of Christian Orthodoxy revered the world over, today to celebrate its imminent conversion from a museum back to a mosque.

The celebrations began after Turkish President Recep Tayyip Erdogan, a passionate advocate of making the Hagia Sophia a mosque once again, issued an executive decree transferring the management of the 1,500-year-old Byzantine structure from the Culture and Tourism Ministry to the Religious Affairs Directorate.

The anticipated change follows a ruling by a Turkish court annulling a 1934 decree issued under the revolutionary founder of the modern Turkish republic, Kemal Ataturk, changing its status from mosque to museum.

The decision was very much a formality. Erdogan’s close circle made it clear in private exchanges that despite the likely international furor that is likely to erupt, the president’s mind was made up.

“We know they will mount a battle to take it back from us but by the grace of God it will remain a mosque forever,” a woman told cameras positioned outside the UNESCO world heritage site in the heart of Istanbul. Fellow Muslims from across the world hailed the news. Pakistani analyst Zaid Hamid tweeted that his wife had refused to set foot in the Hagia Sophia until it was a mosque. "Allahu Akbar … Allahu Akbar!!" he exclaimed.

Neighboring Greece was among the first to denounce the move. Culture Minister Lina Mendoni called it “a direct challenge to the entire civilized world.”

Christians in Turkey aired their grief and worry that the conversion would further polarize Muslims and Christians at home and beyond. It “will make life more difficult for Christians here and for Muslims in Europe. Hagia Sophia was a symbol of our rich history. Its dome was big enough for us all,” lamented Garo Paylan, an ethnic Armenian Christian opposition member of the Turkish Parliament in a tweet.

Hailed as an architectural wonder, the Roman Empire’s first Christian cathedral was converted to a mosque by Mehmed the Conqueror upon wresting Istanbul from the Byzantine Emperor Justinian I in 1453. Ataturk’s gesture carried a powerful message of Turkey’s determinedly Western orientation. But for millions of pious Turks reeling from Ataturk’s scrapping of the caliphate and banning of the Islamic veil, the change was nothing short of heresy.

Nicholas Danforth, a historian and a fellow at the Wilson Center’s Kennan Institute, told Al-Monitor, “As a museum, the Hagia Sophia symbolized the idea of there being common artistic and cultural values that transcended religion to unite humanity. Its conversion into a mosque is an all too appropriate symbol for the rise of right-wing nationalism and religious chauvinism around the world today.”

Danforth continued, “Having personally defeated Western powers in battle, Ataturk could confidently court their approval by appealing to sense of shared civilization. Erdogan now seems to be courting Western criticism and presenting Turkey as still embattled to shore up his base.”

The issue of the Hagia Sophia’s “reconquest” has been a rallying cry for Muslim nationalists for decades led by Erdogan’s ideological hero, the late Turkish poet Necip Fazil Kisakurek. Even as restoration work on its famous basilica has continued, Erdogan’s veteran lieutenant, Bulent Arinc, spearheaded a vocal campaign for the conversion until Erdogan publicly took up the cause in 2019.

Appeals by the Ecumenical Greek Orthodox Patriarch Bartholomew I as well as by US Secretary of State Mike Pompeo to preserve the Hagia Sophia as a museum will have only sharpened the sense of victory among Erdogan’s pious base.

There is widespread speculation that the Hagia Sophia will be formally reinstated as an Islamic house of worship on the fourth anniversary of the July 15 coup attempt in 2016, with Erdogan, a certified imam, leading prayers. Erdogan was scheduled to address the nation tonight to share the good news. His first reaction was to say “Hayirli Olsun,” or “May it be auspicious” on Twitter.

Whether it’s to fulfill a historic mission or to cynically court votes, Erdogan’s “success so far has been in making the two indistinguishable,” Danforth noted.

Maybe so for the faithful, but not for his political rivals. Kemal Kilicdaroglu, the leader of the main opposition Republican People’s Party, said Erdogan was seeking to bait him into a debate over whether the Hagia Sophia should be opened to Muslim prayer when in fact one of its wings has effectively been so for several years.

In 2016, the Religious Affairs Directorate appointed a full-time imam to the Hagia Sophia, and the call to prayer is broadcast from all four of its minarets, which were added following its initial conversion.

Ozer Sencar, the founder of the Ankara-based polling agency Metropoll, noted in a series of tweets that the move will do little to salvage the ebbing popularity of Erdogan and his ruling Justice and Development Party as rising prices and unemployment take their toll. Sencar cited the results of a survey that show that young people in particular are not impressed by the Hagia Sophia gambit. Around 74% of 18-24 year olds surveyed said they believed it was part of an effort to deflect attention from the economic crisis.

Whatever its motivation, the government’s overarching concern now needs to be to ensure that the Hagia Sophia’s exquisite mosaics and other artifacts are not harmed, UNESCO has warned. The results of the conversion of its 13th century namesake in the Black Sea city of Trabzon in 2012 following a similar legal path are hardly encouraging and many fear vandals may be emboldened.

“This will be a powerful historical rupture,” observed a veteran European observer of Turkish politics who sought anonymity. “But it also places the mosaics — some of humanity's greatest ever works of art — in serious jeopardy unless they are monitored by professional scientists and recognized experts and not just clerical bureaucrats. There is a risk of a tragedy which future generations will not forget,” he told Al-Monitor in emailed comments.

It remains unclear how today’s ruling will affect the day-to-day management of the monument, which rakes in millions of dollars of now sorely sought tourist revenue. Will it be closed to non-Muslim visitors during prayer times? Will its depictions of Jesus and Mary be obscured during worship in keeping with Islamic strictures? The hiatus in tourism caused by the COVID-19 pandemic gives the government time to plot the way forward. But whatever the outcome, July 10 will be recorded in world history as a monumental day.