Hagia Sophia's Christian icons to be covered with curtains during prayers

The 1,500-year-old Byzantine structure, which functioned as a museum for nearly 100 years, will reopen as a working mosque this week. 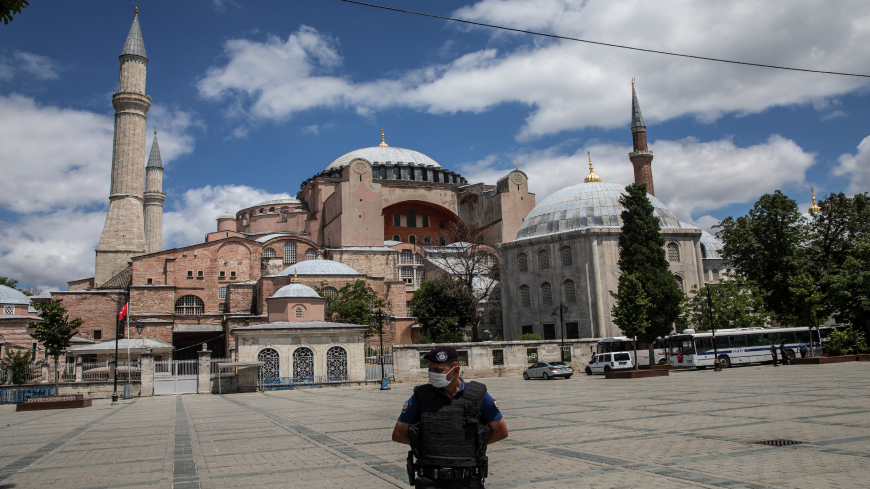 A police officer stands guard in front of Istanbul's famous Hagia Sophia ahead of Friday prayers on July 17, 2020, in Istanbul, Turkey. On July 10, Turkey's highest administrative court voted to revoke Hagia Sophia's status as a museum, allowing the iconic structure to be converted from a museum back into a mosque. - Chris McGrath/Getty Images

The Hagia Sophia will cover some of its Christian mosaics with curtains, Turkey’s presidential spokesperson said, ahead of the contested landmark’s reopening as a working mosque this week.

“Our goal is to avoid harming the frescoes, icons and the historic architecture of the edifice,” Erdogan’s spokesman Ibrahim Kalin said during a TV interview Sunday.

“Currently, we are working on covering them with a curtain [during prayers],” he said.

In a controversial move earlier this month, Turkish President Recep Tayyip Erdogan declared the iconic Hagia Sophia in Istanbul a mosque to be used for prayers beginning this Friday, July 24.

The UNESCO World Heritage site has a long and storied history in Turkey. Originally built as a cathedral, the 1,500-year-old Byzantine structure served as the seat of the Greek Orthodox Church. It was converted into a mosque following the 1453 capture of Constantinople (what is now Istanbul).

The father of the modern Turkish Republic, Kemal Ataturk, turned the building into a museum as part of his efforts to secularize the country. A court earlier this month annulled Ataturk’s 1934 decree, paving the way for Erdogan to re-designate the sixth-century building as a mosque.

The Turkish government has stressed that Hagia Sophia, one of Turkey’s most-visited tourist attractions, will remain open to non-Muslims outside of prayer times.

The country's religious authority, the Diyanet, had previously said the depictions of Jesus and other Christian figures would be covered “through appropriate means during prayer times.” Kalin said imagery that doesn’t face the direction Muslims pray wouldn’t be an issue, but he didn’t say if they would remain uncovered.

Erdogan made a surprise visit to Hagia Sophia on Sunday to check on the building’s conversion. Some 500 worshippers, including the president, are scheduled to attend socially distanced prayers on Friday.