Experts from the United Nations called on the Turkish government to use the contested landmark as a place of interfaith dialogue. 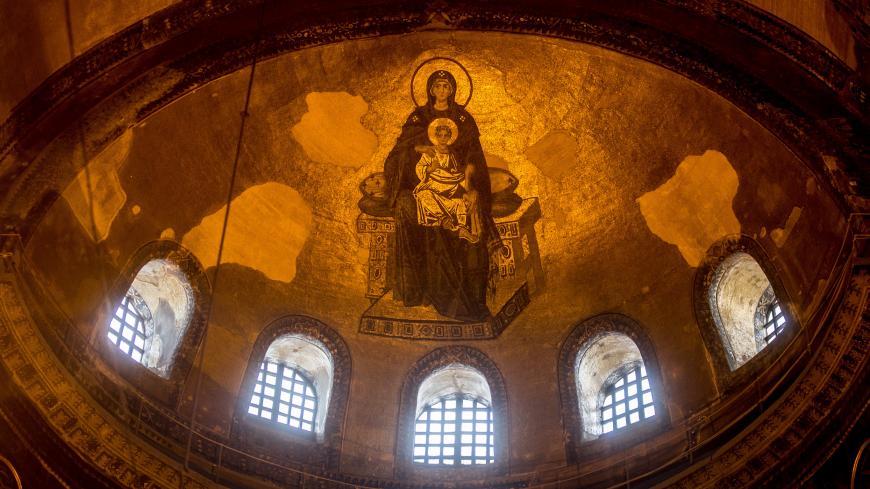 The ceiling of one of the domes inside the Hagia Sophia Museum is seen on Feb. 11, 2016, in Istanbul, Turkey. - Chris McGrath/Getty Images

The Hagia Sophia should be used as an intercultural space, two UN human rights experts said Friday, suggesting Turkey’s conversion of the contested landmark “could reflect a supremacist view of history and culture.”

“It would be an historic mistake at this difficult global moment to take actions which divide religious and cultural groups in Turkey and beyond, rather than uniting them,” Karima Bennoune, special rapporteur in the field of cultural rights, said in a statement.

In what’s been seen as an attempt to energize his conservative power base, Turkish President Recep Tayyip Erdogan controversially ordered Hagia Sophia reverted to a mosque. Last Friday, the longtime tourist attraction hosted its first Friday prayers in more than 80 years with Erdogan, a trained imam, leading the service.

Erdogan has responded to critics, arguing that the reconversion of the Hagia Sophia to a mosque and the restoration of the Sumela monastery in eastern Turkey show “how Turkey protects and beautifies all kinds of civilization heritages on its land.”

Addressing a videoconference July 28, he added, "If we were the kind of nation targeting the symbols of other faiths, as it is claimed or implied to be the case, this monastery, which has been ours for five centuries, would have already ceased to exist.”

The UNESCO World Heritage site has a long and storied history in Turkey. Originally built as a cathedral, the Byzantine structure served as the seat of the Greek Orthodox Church. Hagia Sophia was then converted into a mosque following the 1453 capture of Constantinople (what is now Istanbul).

Under a 1934 decree issued by the government of Mustafa Kemal Ataturk, the founder of the Turkish Republic, Hagia Sophia was turned into a museum. The UN experts pointed out that the 1,500-year-old monument has since been used by people of all religions and “celebrated as an example of interfaith and intercultural dialogue.”

“As someone said, ‘The dome of the Hagia Sophia should be big enough to include everyone,’” Ahmed Shaheed, special rapporteur on freedom of religion or belief, said in the statement.

The Turkish government maintains the mosque will be open to non-Muslims outside of prayer times. The pro-Kurdish Peoples' Democratic Party was excluded from invite-only prayers last Friday.

The UN experts also said they were troubled by the use of a sword by Turkey’s head of religious authority during the first prayer service, which “could be construed as a symbol of conquest.”