With support from Russian officials and the Orthodox Church, Syria will begin construction on a small-scale replica of the Hagia Sophia that will serve as an Orthodox cathedral. 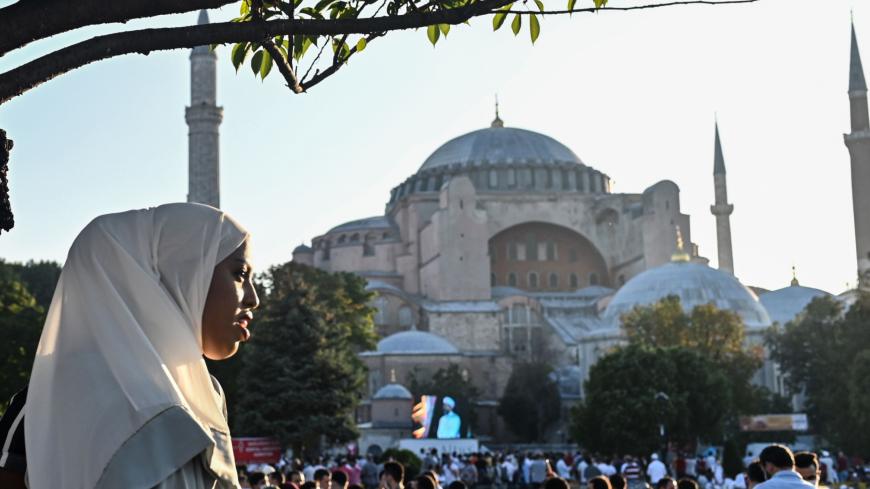 A woman looks on after the Eid al-Adha prayers outside the Hagia Sophia in Istanbul on July 31, 2020. - OZAN KOSE/AFP via Getty Images

With support from Russian officials and the Orthodox Church, Syria will begin construction on a replica of the Hagia Sophia that will serve as an Orthodox cathedral, according to the Lebanese Al-Modon news website.

The decision follows a controversial order by Turkish President Recep Tayyip Erdogan last month to reconvert the Hagia Sophia, a UNESCO World Heritage Site in Istanbul that was built in 537, into a mosque. Erdogan’s decree followed a ruling by the Council of State, Turkey’s highest administrative court.

The Hagia Sophia was built as a cathedral in what was then Constantinople; after Constantinople fell to the Ottoman Empire in 1453, it became a mosque. In 1935, it was turned into a museum.

Russia will help fund a scaled-down version of the cathedral in the western Syrian province of Hama.

“Syria, unlike Turkey, is a country that clearly shows the possibility of peaceful and positive interfaith dialogue,” Russian legislator Vitaly Milonov told the RIA Novosti news agency. “President Bashar al-Assad would never transfer a cathedral from one denomination to another. This is some kind of madness.”

The decision to build a replica was sparked by a statement by Nabel Abdullah, the commander of the National Defense Forces militia, who first sought approval to build the church from Bishop Nicola Baalbaki, the Greek Orthodox metropolitan of Hama, according to the Lebanese news site.

Abdullah has donated the land for the church in the city of Suqaylabiyah, an area with a large Greek Orthodox population.

Erdogan has for years called for the building to be reconverted into a mosque. “The issue of deciding the purpose of Hagia Sophia is about the sovereign rights of Turkey,” he said at a news conference last month. But the decision was met with unease in Moscow; Russian Deputy Foreign Minister Alexander Grushko told the Interfax news agency that while the Hagia Sophia is in Turkey, “without any exaggeration it is a common heritage.”

Russia has a history of using soft power to achieve its goal of peace and stability in the region, said Alexander Bick, a global fellow at the Wilson Center. Bick cited Moscow’s cultural efforts in Syria as a means to strengthen relations with Damascus, including the 2016 Russian orchestra performance at the ruins of Palmyra in Syria that took place only two months after the site was recaptured from the Islamic State. “This is Russia showing that it can take actions across a variety of different domains, military, economic, and in this case cultural, in its relationship with Syria,” he told Al-Monitor.

Russia has supported the Syrian government against Turkish-backed rebels in the western part of the country through the nation’s ongoing civil war. A shaky cease-fire brokered by Turkey and Russia in March has been mostly holding.

What’s next: In a July 13 call between Russian President Vladimir Putin and Erdogan, the Turkish president noted that access to the Hagia Sophia would still be allowed for anyone to visit, including foreign nationals, and he vouched for the safety of sacred Christian items.

Two weeks later, Erdogan recited from the Quran and sat front and center as thousands attended Friday prayers at the site, the first such prayers in 85 years.

Russia will begin site preparation on Syria’s scaled down version of the cathedral in August, according to Global Construction Review.

Know more: Correspondent Matt Hanson examines Erdogan’s efforts to promote interfaith dialogue across the country despite a mounting international outcry over the reconversion of the Hagia Sophia.