Is Turkey's reconversion of the Hagia Sophia into a mosque a politically expedient decision or part of Turkey’s growing global assertiveness? 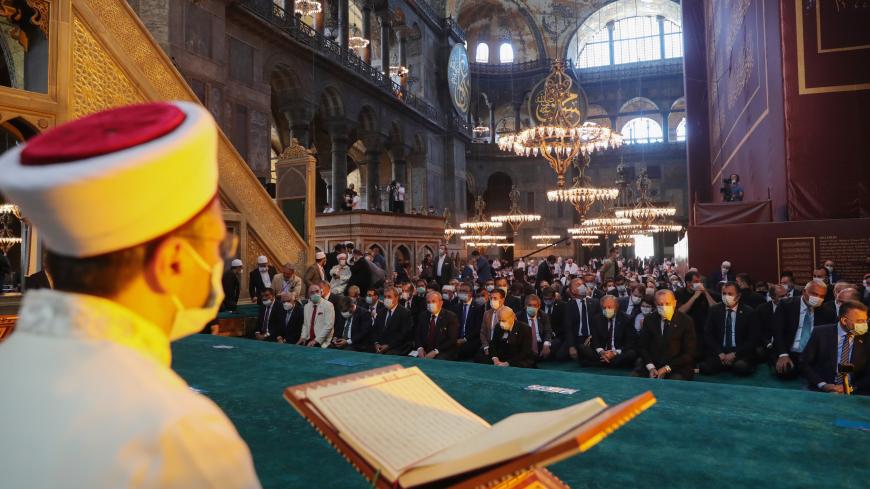 Turkish President Recep Tayyip Erdogan capped 18 years of uninterrupted Justice and Development Party rule today by fulfilling his long-cherished dream of holding Friday prayers in the Hagia Sophia, the glorious domed edifice built by the Byzantines as a cathedral in the sixth century. Today’s ceremony followed the Hagia Sophia's formal conversion from a museum to a full-service mosque July 10. Thousands of faithful brandishing Turkish flags and chanting "God is Great" streamed from across the country to celebrate the historic reversal of the Hagia Sophia’s status.

Most were unable to enter the Hagia Sophia because of strict social distancing rules within the building to prevent the spread of COVID-19. They observed the events on a giant screen erected in the large square in the heart of old Istanbul, where the newly minted mosque sits.

Erdogan, a trained imam, flanked by his top lieutenants and sporting a white prayer cap, recited verses from the Koran in a moving and masterful delivery ahead of the prayers. Turkey’s head of religious affairs, Ali Erbas, delivered today’s sermon, thanking Mehmed the Conqueror, who wrested Istanbul from the Byzantine Emperor Justinian in 1453, and who converted the Hagia Sophia, then a cathedral, into a mosque.

Dangling a sword from his left hand, a gesture of magnanimity practiced by the sultans in the wake of conquests, Erbas intoned that the revival of the Hagia Sophia as a mosque augured “the liberation” of the Al-Aqsa Mosque in Jerusalem. He made no mention of Kemal Ataturk, the long-venerated secular founder of modern Turkey who salvaged the country from occupation and dismemberment by the Allied powers who had defeated the Ottomans in World War I; Ataturk converted the Hagia Sophia into a museum in 1934. Erbas reminded the congregation of Mehmed’s alleged testament that the Hagia Sophia remain a mosque “until Judgment Day” and that those who defied this would "be damned." Turkey’s beleaguered secularists and even an Islamic scholar took Erbas' words as a thinly veiled attack on Ataturk and further evidence of the determined unraveling of his pro-Western legacy. “Ataturk was cursed from the pulpit today,” tweeted theologian Cemil Kilic.

Kemal Kilicdaroglu, the leader of the main opposition Republican People's Party founded by Ataturk, shunned an invitation to join the prayers, saying he disapproved of such public flouting of piety before cameras.

The co-chairs of the second largest opposition group, the pro-Kurdish Peoples' Democratic Party, were frozen out in a further display of the polarizing tenor of Erdogan's presidency.

While there is mounting conjecture that Erdogan’s next move will be to restore the caliphate abolished by Ataturk and to declare himself the spiritual leader of Muslims worldwide, analyst Selim Koru told Al-Monitor that he believes such chatter is overwrought and that Erdogan is unlikely to opt for such a course. “There’s all sorts of ways it could go wrong. It’s not a national issue, it’s an issue concerning the world’s Muslims. He doesn’t have control over that [and] it could look very bad,” said Koru, an expert at the Economic Policy Research Foundation in Ankara. “I haven’t heard serious discussion of that.”

Predictably, Christians worldwide have aired anger and dismay at the conversion of a monument listed by UNESCO as a World Heritage site. (That designation could be withdrawn, the UN’s cultural arm has warned). Pope Francis said during his weekly Sunday address, “I think of Hagia Sophia and I am very saddened.” The ecumenical patriarch, Bartholomew I, and his flock of up to 300 million Orthodox Christians worldwide have felt the blow even more acutely.

Bartholomew’s ambassador in the United States, Archbishop Elpidophoros, told The Associated Press following a meeting with President Donald Trump and Vice President Mike Pence on Thursday that Turkey’s actions displayed “a right of the conquerer" mentality by Turkey’s leader. “This is dangerous for Christian, Jewish and other minorities” in Turkey, he said.

But Erdogan has indicated he thinks otherwise, saying earlier this month, “There are currently 435 churches and synagogues open for worship in our country.” Erdogan’s government also prides itself on renovating old churches and on building a new Syriac Orthodox Church, the first in the Republican era. Yet at the same time Turkey has begun to deport foreign Protestant missionaries and is barring their return.

Historians and conservationists fret that the Hagia Sophia’s unparalleled mosaics and frescoes will be damaged as a result of the conversion. Judith Herrin, a renowned Byzantine historian and a self-avowed “Pro-Turk,” described the Hagia Sophia's reconversion as “an act of cultural cleansing.”

She said that by restricting access to “Istanbul’s greatest historical legacy” during prayers and covering its depictions of Jesus and Mary with newly installed curtains, “Erdogan assaults the cosmopolitan traditions that make the city and Turkey itself a crossroads for the world.”

Herrin also made pointed references to Erdogan’s wilting poll numbers in her op-ed for The Washington Post. These were reflected by his party’s crushing losses in municipal polls last year that saw Istanbul, Ankara and several other major cities fall to the opposition.

The Hagia Sophia reconversion may well be intended as a distraction as Turkey’s economy heaves under growing unemployment and sagging growth, all exacerbated by the fallout from COVID-19. Some analysts suggest that Erdogan pulled out the Hagia Sophia card in a final desperate act.

There is undoubtedly a strong whiff of political maneuvering, and its results are mixed. “It’s a qualified success. It polarizes the opposition, with a nationalist part joining the festivities and a leftist part abstaining from them,” Koru said. “The point is always to shrink the left and grow the nationalist poles,” he added.

Others maintain, however, that the decision speaks above all to Turkey’s growing assertiveness and its desire to achieve the global power and respect it believes it long deserved. The long overdue exercise of full sovereignty over the Hagia Sophia, as Erdogan and his supporters see things, is bound up with Turkey’s muscle-flexing in Syria, Libya and the eastern Mediterranean.

Jenny White, a social anthropologist at Stockholm University’s Institute of Turkish Studies and the author of the groundbreaking “Muslim Nationalism and the New Turks,” reckons that both explanations are likely true.

“Opening Hagia Sophia to Muslim prayer is a political act, a symbolic enactment of nationalist identity, an act of reverse conquest and of vengeance against the secular West, and a bid to raise the popularity of the president, whose support is flagging,” she told Al-Monitor.

After the decision to turn the museum into a mosque, an enormous wall-to-wall turquoise carpet was hastily laid down across the ancient marble floors. A square was cut out to reveal the Omphalion, the panel of colored marble that marks the spot where Byzantine emperors were crowned. "The conversion was Erdogan's crowning achievement," White said.