Long a subject of political discourse in Turkey, a court will issue a verdict within 15 days on whether Istanbul’s iconic Hagia Sophia, currently a museum, can be converted into a mosque. 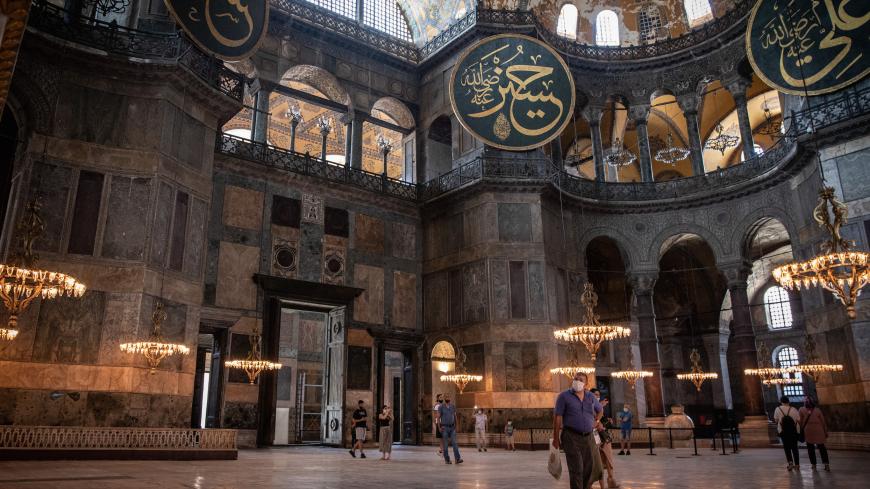 ISTANBUL — Discussions of converting Istanbul’s iconic Hagia Sophia into a mosque have percolated for years in Turkish politics. And following a brief hearing Thursday, a Turkish court is preparing to issue a verdict on the matter within 15 days.

The sixth-century structure was originally built as a cathedral and converted into a mosque following the 1453 Ottoman conquest of Constantinople, today known as Istanbul. The Hagia Sophia was later changed into a museum in a 1934 decision that came about a decade after the founding of the Republic of Turkey by Mustafa Kemal Ataturk.

Since then, the structure’s status has been the subject of political debate, with Turkish President Recep Tayyip Erdogan repeatedly voicing intentions to convert the Ayasofya, as it’s known in Turkish, into a site for Muslim worship in recent decades.

Seen as a move that would appeal to nationalist and religious voters at a time when support is waning for Erdogan’s ruling Justice and Development Party (AKP) amid economic pressure from the coronavirus crisis, a decision is now looming after a Turkish court heard arguments from a group seeking to annul the 1934 decision.

“We think they will see that Ayasofya being a museum for 86 years has hurt and saddened the Turkish people,” Selami Karaman, a lawyer arguing the case, told reporters after the hearing.

He added, “This mosque … is the personal property of Sultan Mehmet the Conqueror,” in reference to the Ottoman leader who led the conquest of Constantinople.

Soner Cagaptay, director of the Turkish Research Program at the Washington Institute for Near East Policy, said changing the Hagia Sophia into its present status as a museum was a centerpiece of Ataturk’s attempt to create “a secular, European, Western-facing republic.”

“A century later, Erdogan is carrying out his own revolution … to shape Turkey into his own image, a country that is conservative socially, politically Islamist and facing the Middle East,” Cagaptay told Al-Monitor. He added, “He is using the Hagia Sophia to underline his own revolution — that is, a religious revolution of flooding Turkey’s public space, education and government with religion.”

While Cagaptay said the conversion may not take place this year, he expects Erdogan, who arrived in Qatar Thursday for a state visit, to follow through on the long-held ambition before leaving office.

Ozgur Unluhisarcikli, Ankara director for the German Marshall Fund, also said he believed the Turkish government would seek to convert the building in the near future. Noting the move would reverse a downward trend in voter support for the AKP in the short-term, Unluhisarcikli said a conversion would pose a direct challenge to Istanbul’s popular Mayor Ekrem Imamoglu of Turkey’s main opposition Republican People’s Party (CHP).

“This is a clear attempt at discrediting Ekrem Imamoglu by putting him on the wrong side of a polarizing discussion,” Unluhisarcikli told Al-Monitor. “Of course, converting Ayasofya into a mosque will be very popular among the wider public, but it will also be a divisive issue within the CHP. That’s important.”

He added that a significant share of voters supporting Turkey’s various opposition parties view the debate, if not on religious grounds, as an issue of national sovereignty. Opposing a court decision to convert the structure would put Imamoglu at odds with many of his supporters, Unluhisarcikli said.

“Imamoglu is the target here,” Unluhisarcikli told Al-Monitor. “As the mayor of Istanbul, he will need to respond. And as the cosmopolitan person that he is, it is difficult for him to support this conversion.”

Ahead of the court case, US Secretary of State Mike Pompeo issued a statement Wednesday, urging the Turkish government “to continue to maintain the Hagia Sophia as a museum, as an exemplar of its commitment to respect Turkey’s diverse faith traditions and history, and to ensure it remains accessible to all.”

Pompeo’s comments were soon after met with criticism from Turkey’s Foreign Ministry, whose spokesperson, Hami Aksoy, said the “Hagia Sophia, situated on our land, is the property of Turkey, like all our cultural assets.” He said any issue regarding the building is “our internal affair as part of Turkey's sovereign rights."

The debate was also criticized by the spiritual leader of Orthodox Christians, Ecumenical Patriarch Bartholomew, who said converting the Hagia Sophia into a mosque would sow discord between Christians and Muslims around the world. Similar statements were issued by Greek leaders Thursday, who view the building one of the most important sites of Orthodox religious and cultural heritage.

The developments come after Muslim prayers were recited in the Hagia Sophia on May 29 in celebrations marking the anniversary of the Ottoman conquest of Constantinople, an event that also drew criticism from Greek leaders.

by Murielle KASPRZAK and Joseph SCHMID | AFP | May 26, 2022
END_OF_DOCUMENT_TOKEN_TO_BE_REPLACED