The ancient aspiration of Turkish Islamism to transform Hagia Sophia from a museum to a mosque is back on the agenda. 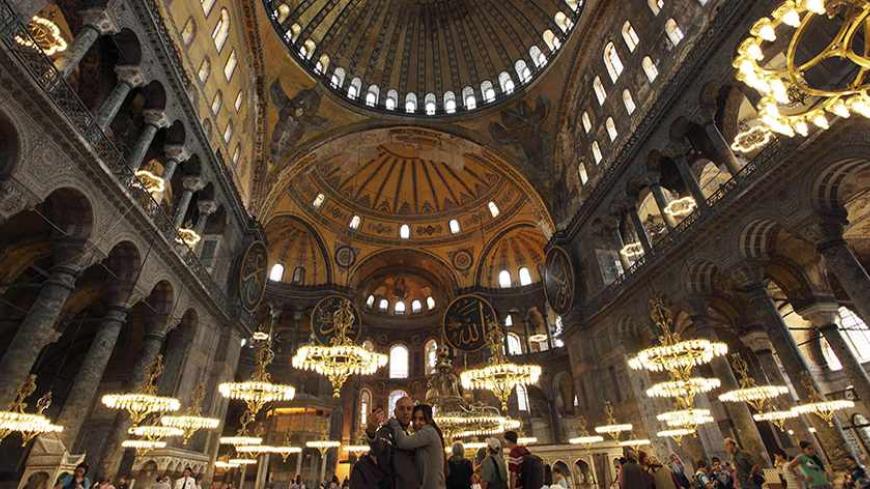 Tourists visit the Hagia Sophia, now a museum, in Istanbul, May 25, 2011. - REUTERS/Murad Sezer

Everyone may know the Ayasofya [Hagia Sophia] but it is best we share some basic information about this historic edifice because this article is about what it was and what it may be. In short, this is about the identity of Ayasofya. This is an issue that is closely linked to Turkey’s identity and future as much as it is to the country’s relations with the Christian, especially the Orthodox, world.

Ayasofya’s main cupola, which together with the Sultanahmet Mosque in Istanbul’s historic peninsula makes up the city’s silhouette, acquired its final shape in the sixth century. There are three landmark dates in Ayasofya’s long history.

The first is Dec. 27, 537. That was the day Divine Wisdom, or Hagia Sophia in Greek, was inaugurated in the capital of Byzantium.

The second is May 29, 1453. Former Constantinople was conquered by the Ottomans, and Emperor Mehmet II turned Ayasofya from a church into a mosque.

The third is Nov. 24, 1934. That was the day when a decision of the Council of Ministers of the Turkish Republic, established under the leadership of Mustafa Kemal Ataturk, decided to transform Ayasofya from a mosque into a museum.

We will see in the coming months or years whether a fourth date will be added as the day when Ayasofya is again turned into a mosque.

Here, we should note that there is serious probability of Ayasofya Museum opening to Muslim worship as the Ayasofya Mosque in the not-too-distant future.

It appears that it is the turn of the grand Ayasofya. Two other historic Greek Orthodox structures that have the name of Ayasofya that were turned into mosques from churches following the Ottoman conquests of Anatolia, and then turned into museums in the secular republic era, are now serving as mosques.

The first is the old Ayasofya Church in the coastal city of Trabzon in the eastern Black Sea region, which opened for worship in 1263 during the Pontus state era. When the city was conquered by the Ottomans in 1484, it was made a mosque and, after its restoration in 1964, it was made a museum. On June 29, 2013, it was reopened to Muslim worship.

The second is the ancient Byzantine structure of Ayasofya Church in the historic town of Iznik [Nicea]. This structure was made a mosque by Ottoman Sultan Orhan, who conquered the town in 1331, and it was used as a place of worship until the 1920s. Before being reopened as a mosque on Nov. 6, 2011, it was known as Iznik Ayasofya Museum.

We should add a third structure. We learned on Nov. 20 that the decision was made to turn the last remaining major structure of Studios, the grandest Byzantine era monastery of Istanbul, known as the Agios Ionannes Prodromos [Baptist Yahia Church], into a mosque.

It must be put on record that the Islamist Justice and Development Party (AKP) government intends to turn back into mosques the ancient Byzantine edifices that the Ottomans turned into mosques from churches, which were made museums in the secular republic era.

The strongest indicator of this intention was given by government spokesman and Deputy Prime Minister Bulent Arinc in a speech he made on Nov. 15 at the opening of the Ayasofya Carpets Museum adjacent to the Ayasofya Complex. Following are excerpts from that speech:

"We blessedly lived through two events that made me very happy during my tenure. We reopened two mosques with the names of Ayasofya for worship. These were mosques anyway but were being used for other purposes. … All we had to do was to say: This is a mosque. It was opened for worship and used for centuries. … A mosque cannot be used for anything but worshipping. We are now looking at forlorn Ayasofya. We wish to God that the days until it will smile again won’t be long, Inshallah [God willing]."

We note there that the person who will make the final decision on whether Ayasofya will be opened to Muslim worship again is the strongman of Turkey, Prime Minister Recep Tayyip Erdogan. Of course, if it had been Erdogan who had made a similar declaration the impact would have much greater. But there was neither negative reaction from Erdogan to the words of Arinc nor any remarks to the contrary from the prime minister’s inner circle. We can therefore assume that Erdogan had approved the message of reopening Ayasofya to prayers.

"To reopen Ayasofya to prayers" has always been a demand the Islamic movement in Turkey has regularly voiced to mobilize the conservative masses. For the Islamists, closing Ayasofya to Muslim worship and making it a museum was a trauma inflicted upon them by the secular Turkish Republic. Islamists have seen this as an insult and victimization and has passed on this sentiment to the political generations that followed.

This is why the reopening of Ayasofya to prayers is an opportunity the Islamists have been waiting for, a historic settling of accounts with the secular republic.

This explains why the Islamists of Turkey celebrate the 1453 conquest of Istanbul by Ottomans differently and definitely more impassionedly. For them, it is about restoring some old symbols of the Ottoman reign eliminated by the secular and modern republic and transforming the city in the Islamic sense. The new significance the Islamists attribute to the conquest of Istanbul is to take over the city and turn it into what they want.

In this context, reopening Ayasofya to prayers is not a legal but purely ideological and political issue. It will be a major milestone in constructing the new Islamic identity of Turkey.

There is some relevance of the issue to real politics. Journalist Rusen Cakir, renowned for his expertise on Islamic movements in Turkey and faith communities says the Welfare Party under the late Necmettin Erbakan and other Islamist currents also had the reopening of Ayasofya Muslim worshippers in 1980s on their agenda, but when banning of headscarves at schools and in public spaces emerged as a real problem it was put on the back burner.

Of three claims of victimhood that political Islam has been focusing on, "headscarf bans in higher education and in public" and "restrictions and pressures on imam-preacher high schools that offer Sunni-Islam education" appear to have been solved in line with their demands. That leaves Ayasofya as the last and the final victimhood claim they can carry on to the political arena.

It must be remembered that only a strong and authoritarian secular regime could have turned Ayasofya into a museum after serving as a mosque for centuries. Nevertheless, it is not easy to claim that the 1934 decision to do so depended on a social engineering project such as creating a secular Turkish nation. Rulers of Turkey in those days decided to turn the most magnificent and important temple of Christianity back into a museum after it was made a mosque in 1453 to showcase to the Western and Orthodox world how the young republic was liberating itself from the common adverse heritage of the Ottomans to make a new start with the West.

Therefore, it would be wiser if the Islamist rule that is obviously motivated by vengeance sentiments can look at the Ayasofya issue not from local and regional perspectives but from a global viewpoint and refrain from instigating new conflicts.

No wonder that the first reaction to Arinc’s remarks came from Athens. The Greek Foreign Ministry in a statement on 18 November said:

"Repeated statements by Turkish officials on turning Byzantine Christian churches into mosques constitute an insult to religious sensitivities of millions of Christians. These are hard to understand and anachronic actions by a state that has declared its desire to be a full member of the European Union whose basic principle is respect to religious freedom." The statement added, "Byzantine Christian churches are among basic elements of the world cultural and religious heritage and deserve to be respected and preserved."

The spokesman for the Orthodox Patriarchate of Istanbul, Dositheos Anagnostopulos, said in a statement that was published in the daily Radikal on Dec. 8, "Why the decision out of the blue to turn Ayasofya into mosque? Why are they doing this? It is either for votes or for the slogan of 'We are No. 1 in the Islamic world.' … Turning Ayasofya into a mosque could also mean that a church that was a monument of world civilization may not anymore be open to visits."

Asked by the Radikal reporter whether there might be reactions to such a decision, Anagnostopulos replied, "There will be reaction for Ayasofya of Istanbul. How it will be I don’t know, but I am sure."

If Ayasofya is again turned into a mosque, it will be a fundamental contradiction for Erdogan, who in 2005 launched "Alliance of Civilizations" with the Spanish Prime Minister Jose Zapatero.