Erdogan’s government has signaled it could consider turning the Hagia Sophia Museum into a mosque as part of religious messages aimed at keeping its voter base intact under the strain of economic turmoil, made worse by the COVID-19 pandemic. 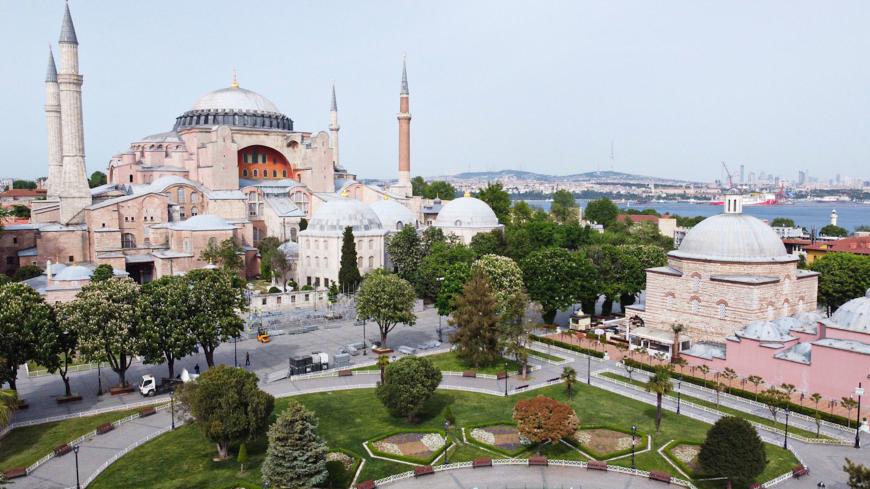 The Hagia Sophia and its surroundings remain empty during the third day of four-day coronavirus restrictions imposed to stem the novel COVID-19 pandemic in Istanbul, May 18, 2020. - Erhan Sevenler/Anadolu Agency via Getty Images

“We’ve been longing for it! But a little more patience. We’ll make it together,” the Turkish president’s communication chief, Fahrettin Altun, tweeted May 10. The subject of his yearning was revealed in a picture attached to the tweet: the Hagia Sophia Museum in Istanbul. And the promise of success was about a decades-old “cause” of Turkey’s Islamists — converting the Hagia Sophia into a mosque — which they have inflamed at times and damped down at others, depending on their political interests.

The Hagia Sophia — “Holy Wisdom” in Greek — was built as a church during Byzantine times in 537 and functioned as such for 916 years before the Ottomans conquered Istanbul on May 29, 1453, and converted the edifice into a mosque on the same day. Almost half a millennium later, on Nov. 24, 1934, the Hagia Sophia became a museum by a Council of Ministers decree under the modern Turkish republic.

Hence, reverting the Hagia Sophia to a functioning mosque has been a holy grail for the Islamist movement in Turkey. Today, the Hagia Sophia is the only subject of “victimhood” that the movement has left for political use after the abolition of the headscarf ban for public servants and students, starting from secondary school, and the removal of “restrictions” and “pressure” on imam-hatip schools, which provide Islamic education in line with the Sunni faith.

Altun’s tweet went viral, generating 12,400 retweets, 57,600 likes and 4,200 comments. And though some “troll contribution” was probably involved, the fact remains that the Islamist cause for a “Hagia Sophia Mosque” has lost nothing of its vigor.

A day after Altun’s tweet, a video of President Recep Tayyip Erdogan reciting the Quran was published on the website of the pro-government daily Yeni Safak. It showed Erdogan sitting at a desk in what looked like a government office and reciting the Quran loudly in Arabic.

The caption informed viewers that the president was doing a khatm — a reading of the Quran from beginning to end — on the occasion of the holy month of Ramadan and had reached the 25th section of the holy book, which consists of 30 sections of 20 pages each. According to Yeni Safak, social media users were impressed how Erdogan had already reached section 25 on the 18th day of the Ramadan. Text reading “I’m at section 25” as if quoting Erdogan appears in the first 14 seconds of the one-minute footage, punctuating further that it was intended for propaganda.

The video came as a striking example of how religion is exploited in politics in Turkey. Though it was not the first time that Erdogan was filmed reading the Quran, the footage acquired greater significance by coinciding with Altun’s Hagia Sophia tweet, with the two messages reinforcing each other.

In Turkey, the degree of intensity or excess in which religious elements are used in political propaganda serves as a “stress barometer” to gauge the mood of the mainstream Islamist movement. When Erdogan and his Justice and Development Party (AKP) turn up the dose of religion in their political messaging, one knows that the stress of the government has increased.

An earlier example of this emotional state was seen in Erdogan’s campaign ahead of the local elections in March 2019, which resulted in the AKP’s loss of Turkey’s main cities. The anticipation of defeat led to such panic and apprehension in government ranks that Erdogan used any opportunity to its utmost to sharpen religious-based polarization in a bid to stop conservatives from gravitating away from the AKP.

At a rally on March 16, 2019, for instance, Erdogan’s crowd was offered a showing on a giant screen of footage from the mosque massacres in Christchurch, New Zealand, which the assailant himself had livestreamed the day before.

And in the final week before the polls, the unprecedented level of stress led Erdogan to play a powerful card as a last resort — inflaming “the Hagia Sophia cause” by suggesting for the first time that the edifice could be reopened to Muslims to pray.

He had a new formula, which entailed renaming the edifice as the Hagia Sophia Mosque, the logic of which he explained as follows: “Entry into the Hagia Sophia could become free of charge after the elections. Just like the tourists visiting the Blue Mosque — they are not paying anything, are they? The same could be done at the Hagia Sophia [by] removing its museum status.” So, just as the nearby Blue Mosque, famous for its blue tiles, the Hagia Sophia was to be open to both Muslims to pray and tourists to sightsee.

In a speech in Istanbul two days later, on March 26, 2019, Erdogan confirmed his resolve “to revert the Hagia Sophia to its true self after the elections.” With only two days to go before the polls, he asserted, again in Istanbul, that “the plans about the Hagia Sophia will be implemented,” adding a personal assurance that “Erdogan says it only once.”

Yet Erdogan’s candidate for Istanbul mayor, Binali Yildirim, lost the race by 18,000 votes. Erdogan refused to concede defeat, forcing a June 23 rerun of the vote. The opposition’s winning margin grew to more than 800,000 votes this time, turning Erdogan’s loss of Istanbul into a full-fledged debacle.

Neither Erdogan nor his aides spoke of converting the Hagia Sophia into a mosque after the rerun — up until Altun’s May 10 tweet. So what could be the reason for rekindling “the Hagia Sophia cause” now?

Could it be simply the purported disgruntlement of the pious over the ongoing closure of mosques in the COVID-19 pandemic, while shopping malls were reopened May 11? Or is the government trying to use religion to suppress the grumbling and the specter of unraveling in its voter base as the pandemic worsens Turkey’s economic turmoil? Or is Erdogan laying the ground for snap elections, which he would like to keep as a contingency option at the ready to retain his grip on power?

In this context, May 29 is a date that needs to be flagged. Why? Ali Erbas, the head of the Religious Affairs Directorate, had announced May 15 that mosques would reopen June 12. But only three days later, Erdogan brought the reopening forward by 18 days, saying that mosques meeting certain conditions would partly reopen to worship with Friday prayer May 29. What led to the rescheduling — some unexpected progress in fighting the COVID-19 pandemic or political considerations?

May 29 marks the 567th anniversary of the Ottoman conquest of Istanbul and the Hagia Sophia’s conversion into a mosque. Could Erdogan choose that day to try to deliver the promise he made ahead of last year’s local polls? Renaming the museum to the “Hagia Sophia Mosque” and removing entrance fees would mean exhausting the Islamists’ last victimhood narrative. Would Erdogan go for it at this time?

Regardless of how the May 29 threshold is passed and how the questions above are answered, converting the Hagia Sophia is not as easy as it might seem — and not only because of the outcry that such a move would trigger in the Christian world.

The Hagia Sophia’s museum status allows the coexistence of Islamic and Christian symbols in the edifice. Its conversion to a mosque open to worship would raise religious and political complications.

In April 2019, shortly after the local polls and Erdogan’s pledges to turn the Hagia Sophia to a mosque, Al-Monitor posed the following question to the highest theological council of the Religious Affairs Directorate: Is it permissible for Muslims to pray in churches or indoor spaces that contain symbols and visuals related to Christianity?

The main points of the council’s reply read, “Praying in a church even if other spaces are available is makruh [reprehensible and discouraged, though not forbidden]. In case one is compelled to pray in a church or a synagogue, images and statues should be covered, if possible.”

Then, if the Hagia Sophia is to become a mosque again, what will happen to its priceless mosaics and other symbols, which came to light after the edifice became a museum, emerging from centuries under plaster? Are they going to be plastered again or covered with canvas so that Muslims could pray?

And if so, what legitimate arguments Turkey could possibly find to justify to the world the makeover of a magnificent monument that has been a museum for decades as part of humankind’s common cultural heritage? That’s the question Erdogan’s government needs to meticulously study before turning the Hagia Sophia into a mosque.