Hackers broke into the sound systems of mosques in Izmir to play a popular Italian protest song, reigniting political and religious debates in polarized Turkey. 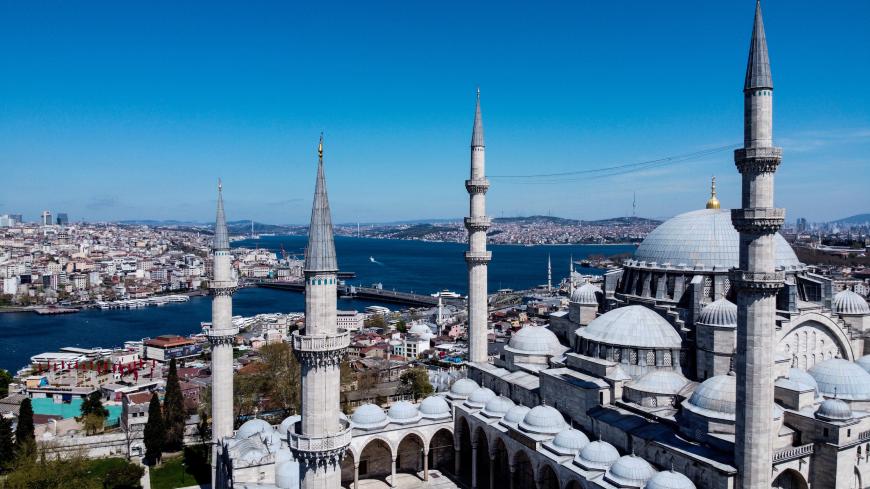 An aerial view of the Suleymaniye Mosque on the first day of the holy month of Ramadan, during a four-day curfew imposed to prevent the spread of the novel coronavirus, in Istanbul, Turkey, April 24, 2020. - REUTERS/Umit Bektas

IZMIR, Turkey — Residents in several districts in the Turkish city of Izmir could hardly believe their ears as "Bella Ciao," the Italian protest song that is akin to a leftist anthem in Turkey, soared from the minarets of mosques instead of the call for prayer on the afternoon of May 20. Hackers had broken into the sound system of several mosques, which are closed due to the COVID-19 pandemic, to broadcast the song, which expresses solidarity with workers and is often sung at protests in Turkey and beyond.

Some might have found the incident amusing, but it is no joke in a country where political polarization is running deep between the conservative and the secular. As videos of "Bella Ciao" blaring from minarets went viral on social media, pro-governmental newspapers seethed with outrage. Sabah trumpeted a “scandal in Izmir,” while Star labeled the hacking as “a heinous provocation.” In the next 24 hours, hackers broke into the systems of two more mosques, this time broadcasting the songs of Turkish protest singer Selda Bagcan. In a hasty statement, the local religious authorities announced that they have deactivated the centralized sound system in mosques.

The hacking is significant first for rekindling the resentment of the conservative government toward Izmir, the so-called “last bastion” of anti-government politicians and intellectuals. Second, it came as the latest episode in rising tensions over religious symbols in Turkey before the country goes on lockdown for Eid al-Fitr, the holiday at the end of the holy month of Ramadan, on May 24-26.

Over the past month, the government has notably stepped up displays of piety, from unprecedentedly loud prayers from mosques to accusations and tough measures against individuals and groups it accuses of “insulting religion.”

Last week, a video showed President Recep Tayyip Erdogan doing a khatm — a reading of the Quran from beginning to end — as practicing Muslims do during Ramadan. On May 17, the holy day of Laylat al-Qadr, the president made a televised appearance on a giant screen decorated with the word “Allah” in Arabic to congratulate the winners of a Quran recitation contest. Earlier in May, Fahrettin Altun, the president’s communication chief, tweeted a suggestive message about the Hagia Sophia, the magnificent sixth century edifice in Istanbul, that electrified Islamists who want to see the structure — currently a museum — converted to a mosque.

The "Bella Ciao" incident immediately inflamed the Hagia Sophia debate. “As a response to this heinous attack on our mosques and the call to prayer, let’s open the Hagia Sophia to [Muslim] worship so those remnants of Greeks can learn a lesson,” tweeted Islami Bakis Acisi (Islamic View Point), an account that pushes an Islamist agenda.

“Remnants of Greeks” or “Izmir, the infidel” are terms that conservatives use to disparage Izmir, whose population was largely non-Muslim — and mostly Greek — until the collapse of the Ottoman Empire and the four-year War of Independence that led to the birth of modern Turkey in 1923. Over the past decade, the ruling Justice and Development Party (AKP) has tried hard to get the reins of the city’s local administration, but to no avail. Izmir has been ruled by social democrat mayors since 1999.

Immediately after the hacking, the Izmir Religious Affairs Department, the local branch of Diyanet, Turkey’s all-powerful state-run religious body, announced that a probe had been launched to find the hackers. Several accounts that praised the hackers were also under investigation by local prosecutors for insulting religious values, according to the local press. The head of Diyanet, Ali Erbas, condemned the hackers as well as those “who have praised this provocative act” and said his directorate would see that they were brought to justice. Local authorities initially suggested that the hack was likely the job of a group of young people with no particular political party affiliation.

Izmir Mayor Tunc Soyer, a social democrat from the main opposition Republican People’s Party, quickly condemned the incident, as some in pro-government quarters suggested the hackers were somehow his sympathizers, if not directly linked to him, because the mayor often uses "Bella Ciao" in public events.

“At a time when we are all preparing for [Eid al Fitr], the playing of songs from the minarets of Izmir has upset the people of Izmir and myself,” he said in a press statement, calling the incident “an act of provocation” at a time when unity is needed.

“Let’s not fall into the trap of those who want to polarize us,” Soyer warned. He added, however, that he also condemned those who sought to use the incident as “a tool of political propaganda against Izmir.”

After he won election last year, Soyer celebrated his victory with "Bella Ciao" playing in the background. Several months later, after successfully completing a labor agreement with public workers, he danced to "Bella Ciao" in a viral video.

His rival in the March 2019 elections, the AKP’s former Economy Minister Nihat Zeybekci, was quick to draw a link to the hacking incident. Referring to last month’s celebrations of the centenary of Turkey’s parliament, he tweeted, “This is what happens if you celebrate April 23 by jumping up and down in the streets of Izmir to the tune of Bella Ciao and make that rubbish the anthem of those who are ashamed [of being Turkish].” A few hours later, pro-government media outlets published in unison articles about “Soyer’s love for 'Bella Ciao.'”

Other members of the ruling party also deplored the incident, some hinting that there was more to the hack. Altun tweeted that it went beyond a provocation. "Those who do not respect our national values … keep attacking what is sacred to us," he wrote, lambasting people for "sharing the hack with pride on social media." The reference here is to Banu Ozdemir, who has worked in the CHP's Izmir branch in the past. She was detained May 21 for sharing the videos.

Many Turks from different points on the political spectrum expressed disapproval for the hack. “If it is intended as a joke, it is not even mediocre,” Can Selcuki, the co-founder of the public opinion and big data firm Istanbul Economy, told Al-Monitor. “But it has been blown up by the trolls on both sides of the political spectrum. Conservatives have seen it as an all-out attack against religion and some secularists have made a joke of it, which is not secularism, as it fails to respect faith.”

Ironically, some young conservatives are also fond of the song with the catchy tune. The Anadolu Youth Association, a conservative nationalist group, adapted it in 2013, substituting the lyrics “Oh Partisan/ Oh Take Me Away/Bella Ciao” with “Oh Muslim/Take Me Away/To the Mosque.” The video they made has been watched and shared hundreds of thousands of times.