An ambitious effort to revive Izmir’s Jewish heritage is paying off as the Turkish city vies for a place on the UNESCO heritage list. 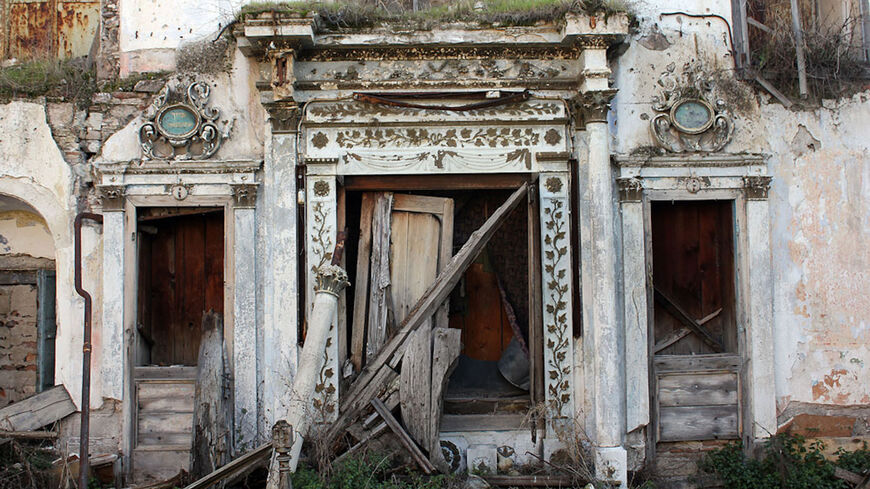 The Synagogue Street, a narrow pathway with a mishmash of colors and smells from fishmongers and spice-sellers, lies at the heart of Izmir, Turkey’s third largest city. The street starts at a stone’s throw from the Hellenistic-era agora and snakes through the historical commercial center. It derives its name from the nine synagogues in its vicinity, four of which were in ruins until half a decade ago.

“Unlike many cities of Europe, the Synagogue Street — or better, the Synagogue District — is right at the heart of town,” Nesim Bencoya, the coordinator of the Izmir Jewish Heritage Project, told Al-Monitor. “It is a compact neighborhood with its synagogues, cortejos [houses where families lived together], a rabbinate and numerous shops and businesses on the crisscrossing streets of Kemeralti, the commercial center. It is also an area where synagogues stand side by side with mosques, where businessmen from the Muslim, Jewish and Orthodox community engage in trade and songs in Turkish, Greek and Ladino are sung one after the other from the nearby taverns.”

For the last 12 years, Bencoya has been going door to door to drum up support for his plans to revive the area and build a Jewish heritage center that would draw in locals and tourists.

“Our community is now less than 1,000,” Tilda Koenka, a tour guide and project assistant in the project, told Al-Monitor. “But the Jewish heritage in Izmir is of global interest — it shows the role Jews played in the city.”

At its zenith in the mid-19th century, the 50,000-strong Jewish population made up the second largest community after the Greeks in the city known in the Ottoman Empire as “Izmir, the infidel.” The city had 34 synagogues, a sophisticated hospital, local Torah schools and a posh college offering a curriculum in French. The city’s first printing press was a Jewish one, printing books in Hebrew, Ladino and eventually in English, and boyoz, the Jewish pastry whose name "bollos" means “little bread” in Ladino, became one of the city’s staple foods.

Many Jews chose to emigrate to France, the United States and Latin America as the weakening Ottoman Empire was ravaged by wars. More left when Israel was founded in 1948 to start a new life in the nascent state, particularly after Ankara levied hefty taxes known as the Wealth Tax on them during the World War II. Fearing exile or death if unable to pay, members of the Jewish community quickly liquidated their assets and wealth changed hands from non-Muslims to Muslims. The Ladino language fell quiet on the streets and the disused synagogues fell apart.

“The restoration work is enormous,” Bencoya told a group of journalists as he stood at the narrow corridor that linked the Hevra and Foresteros synagogues. “Only a year ago, the rubble was one meter high here.”

Today, thanks to support from German Consulate of Izmir and the  Israel-based Mordechai Kiriaty Foundation, the elaborate wooden carvings at the ceiling of Ets Hayim Synagogue, the sumptuous floor mosaics of Hevra and the corridors of the Foresteros that tie several synagogues to each other have reemerged.

“This unusual cluster of synagogues bear a typical medieval Spanish architectural style,” Bencoya said, explaining that the Sephardic Jews, expelled from Spain and Portugal by the 1492 Alhambra Decree, carried their aesthetic to the Ottoman Empire. But the Jewish presence in the region precedes the Spanish edict by centuries, as demonstrated by the late-Roman period synagogue in Sardis, 60 miles (97 kilometers) from the Izmir city center.

For Nikolaus Meyer-Landrut, the head of the EU Delegation to Turkey, the revival of Jewish heritage goes beyond architecture. The EU has provided approximately half a million euros ($688,000) for a three-year project to sustain Jewish heritage in Izmir. The project will finance the establishment of the İzmir Jewish Cultural Heritage Platform, workshops with local and European stakeholders, the development of a strategic plan for further restoring the old Jewish quarter and publication of several books on Jewish cultural topics such as food and music.

The renovation of the Jewish quarter fits well with the ambitions of Tunc Soyer, the polyglot mayor of the city, to get Izmir onto the global map as a city of culture.

“A mayor’s most essential job is to protect his city’s nature and culture and preserve the diversity for future generations,” Soyer told a small group of journalists on the sidelines of the United Cities and Local Governments (UCLG) Culture Summit in Izmir on Sept. 9-11.

An unabashed socialist, Soyer was elected in 2019 on a Republican People’s Party ticket to the city considered a stronghold of secular opposition. He celebrates special occasions with the Italian protest song “Bella Ciao,” exchanges tweets with Paris mayor-turned-Socialist presidential candidate Anne Hidalgo and pledges to make the booming metropolis of Izmir into a "cittaslow," a city made up of self-sufficient neighborhoods with green corridors that lead to the countryside.

The municipality has renovated the Synagogue Street and helped turn Beit Hillel Oratory into a small museum. Municipality sources say that a larger plan has also been drafted, but not finalized, in line with Izmir’s efforts to get the city’s historical center onto the UNESCO World Heritage List. As of 2020, it was on the UNESCO Tentative List — the first step in the process of recognition as a world heritage site.

“We intend to make Izmir one of the cities that has the highest number of UNESCO sites in the world,”  Soyer said, pointing out that the archaeological sites of Ephesus and Pergamon are already on the permanent list. “Izmir is home to many civilizations and has a lot to offer to global heritage. It is a place where different cultures, peoples and faiths live side by side. It is one of the world's oldest and largest open-air museums.”

The area includes traces of the Hellenistic period, ancient Rome, Byzantine and the Ottoman Empire. The city’s symbol, the octagonal clock tower built to mark the 25th anniversary of the enthronement of Ottoman Sultan Abdulhamid II, is there as well. The clock itself was a gift by German Emperor Wilhelm II, but it was local businessmen, including two notable Jewish merchants, who helped finance the construction of the tower to show allegiance to the sultan.

“The Jewish heritage project is an important one that fits into the larger picture of Izmir’s multilayered, multicultural identity,” Serhan Ada, an Izmirian who is one of the brains behind UCLG Summit, told Al-Monitor. “But with Izmir, it is not simply about the past. The city is reviving itself, with its young artists coming back to produce here, because they can find breathing space in the city.”