Turkey’s Sephardic Jewish community has mobilized efforts to save the Ladino language from extinction, but after decades of repression, the swell of interest in their heritage language sounds more like a swan song. 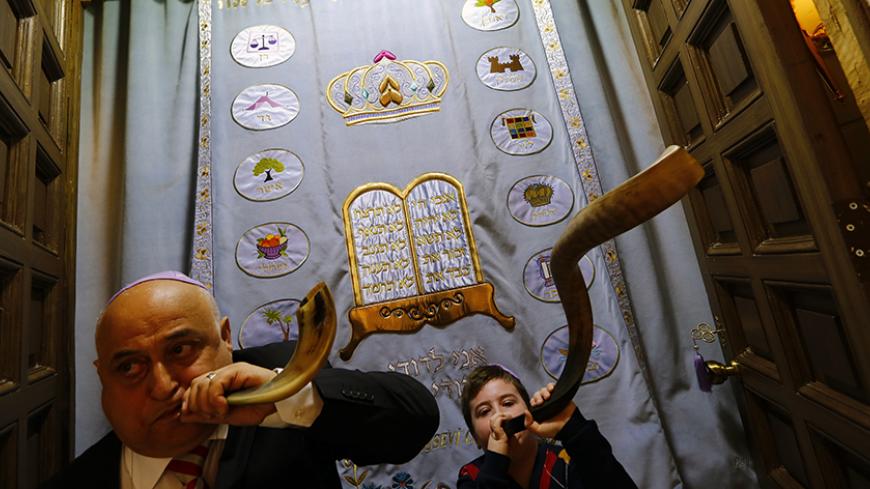 For the young generation of Sephardic Jews in Turkey, their ancestral tongue, Ladino, is just a few words for Grandma's cuisine, a line or two from old songs and some snappy insults.

UNESCO considers Ladino, also known as Judeo-Spanish or Judezmo, a severely endangered language. In Turkey, it is spoken by only about 10,000 people, mostly around Istanbul and Izmir. Other Ladino-speaking communities in Greece and North Africa have also diminished, according to the Unesco Atlas. Israel has declared Ladino endangered as well, and has established a National Authority for the Ladino language and culture.

The language was brought by Sephardic Jews when they came to Turkey in 1492. Much like the Yiddish language in its melting-pot character, Ladino is a Romance language very closely related to Spanish. Much of its vocabulary and grammar is recognizable as Spanish, but it has adopted many Hebrew, Arabic and Turkish words and idioms. While there are still books and magazines published in Ladino, the most common form of Ladino heritage still heard today is in songs, particularly lullabies.

"I could express the most tender and complicated sentiments in Ladino, which I learned by heart through the lyrics of old songs, but I lacked the vocabulary to express my everyday needs, such as asking for a glass of water," Rita Ender, a lawyer with a keen interest in minority issues, told Al-Monitor.

Ender’s documentary "Las Ultimas Palavras” reflects her experience, which is shared by many members of her generation in Turkey’s 17,000-strong Jewish population. For the documentary, she interviewed 19 Turkish Jews between the ages of 25 and 35 and asked them about their knowledge of and their feelings toward Ladino.

While everyone interviewed said Ladino is becoming extinct, their attitudes toward the loss differ widely. Some saw it as inevitable in a world where minority languages are dying out everywhere, and some expressed regret that they had lost their heritage. Some simply said that their mother tongue is no longer Ladino but Turkish, and still others blamed the generation before them for not passing the language on. “If we have lost the language, it was because the generation before us had so decided,” said one young man.

“Ladino is the mother tongue of Sephardic Jews over the age of 70. For those who are 10 years younger, it is a language that they understand and speak fluently, but it is not their mother tongue. Their mother tongue is Turkish. For those under 40, I do not know if they are aware of the language at all, let alone speak it,” Deniz Alphan, journalist and author of Ladino cookbook "Dina’s Cuisine," said in an interview with Hurriyet. Alphan’s hourlong documentary “Fading Language, Fading Cuisine” was screened during the Istanbul Film Festival in March.

For many Ladino speakers, the decline started with the founding of Turkey in 1923 and its determination to establish Turkish as not only the official language of the young republic but the sole language to be used in public. “Most of the Ladino speakers were sufficiently intimidated by the ‘Citizen, Speak Turkish’ campaign to confine their use of Ladino to the privacy of their homes,” said Nesim Bencoya, the coordinator of the Izmir Jewish Heritage Project.

In 1928, the student association of the Istanbul University Faculty of Law started the "Citizen, Speak Turkish" campaign, which was endorsed by the media and supported by the government. Local administrations followed suit; some went so far as to arrest minority language speakers for using their language in the streets.

The campaign went on throughout the 1930s. Posters were put up in the streets and in theaters, restaurants and boats with slogans such as “Those who call themselves Turks should speak Turkish.” Some municipalities imposed fines for using other languages and the speakers of minority languages were often harassed or insulted by other Turks. Ironically, one of the most vocal advocates of this campaign was Mois Kohen, a 45-year-old Jewish man who changed his name to the very Turkish-sounding Munis Tekinalp.

Bencoya, 65 and a fluent Ladino speaker, told Al-Monitor, “We in Izmir were living in the Jewish neighborhood of Ikicesmeli. My grandmother spoke to me in Ladino. My parents talked to each other in Ladino. The language of the neighborhood, from the grocer to the doctor, was Ladino.”

But Jews who lived in more cosmopolitan neighborhoods with Turkish neighbors stopped talking in their language on the streets, afraid that the campaign's zealots would harass them. After Turkey imposed heavy taxes on non-Muslims under the 1942 Wealth Tax Law and amid growing anti-Semitism, the Jewish population became even more introverted.

The young generation also became disinclined to speak it because they considered the “soup” language of their elders inferior to the more common and better recognized European languages. “I looked down on Ladino. I spoke Turkish at home and French at school,” Gila Benmayor, a journalist quoted in "Fading Language, Fading Cusine," told Al-Monitor. She developed an appreciation for not just the language but also the rest of her heritage in her late 20s, when she started attending Spanish courses in the Cervantes Institute in Istanbul. “Once I learned Spanish, the rest was easy,” she said.

Bencoya explained that although most of Ladino's grammar and vocabulary is Spanish, its borrowed vocabulary can sound strange to those who speak the languages the words came from. “We have taken the Turkish word ‘cakmak’ [which means to hit] and then conjugated the verb according to Spanish grammar,” he said. When asked what the word "vaziyo" meant, he burst out laughing: “Now who could have taught you that?” Told that most of the young people in Ender’s documentary cited it as one of the few words that they knew, he said with a laugh, “It literally means 'empty' but is generally used to mean a silly or a foolish person.”

The young people interviewed in “Las Ultimas Palavras” said the only Ladino words they used were exclamations, short phrases or household and culinary terms. Theirs is a vocabulary of childhood that consists of commands and warnings from parents, such as “quiet” or “patience” or “Your grandfather is sleeping.”

Can this language be saved by the awareness raised by documentaries and new opportunities created by special courses from the Cervantes Institute and online courses?

“The Ladino heritage can be saved if we support the Ladino magazines, reprint the books and dictionaries and keep singing the songs,” said Bencoya. “But it is unlikely that it will be ever be actively spoken either at home or on the streets again.” Does he speak it at home? No; his wife, who is Muslim, does not understand the language.

“My 30-year-old daughter is curious about the Ladino culture but she does not speak Ladino,” said journalist Gila Benmayor. “No, I think it is unlikely that the language will ever become active again, but it is important to keep the heritage — with its literature, cuisine and music — alive.”

Only Ender, who screened her documentary in the Paris Cervantes Institute in early June, is more hopeful. “After the show, a French colleague, of Basque origin came to me and said that languages that are dying can be brought back to life,” she told Al-Monitor. “That is, if there is a common desire to do so by the government and by the people.”